Only one person has ever been Director of both the National Security Agency and the Central Intelligence Agency. That person is retired Four-Star General Michael Hayden.

On June 1, 2015, I had the chance to talk to Mike Hayden on Capitol Hill in Washington, DC.

We were both there as part of a conclave to discuss the status of Iran-U.S. negotiations on uranium enrichment and Iran’s nuclear weapons program. We had a chance to talk one-on-one about my specialty, which is financial warfare, and the potential impact on investors. Needless to say, General Hayden’s insights were fascinating.

General Hayden’s career as a military and intelligence officer spans four decades beginning with his commission as an Air Force officer in 1969.

From 1980 to 1982 he was intelligence chief at Osan Air Force Base in Korea. From 1996 to 1997, he commanded the Air Intelligence Agency, today part of the Twenty-Fifth Air Force, which is one of the 17 separate agencies that make up the U.S. Intelligence Community. 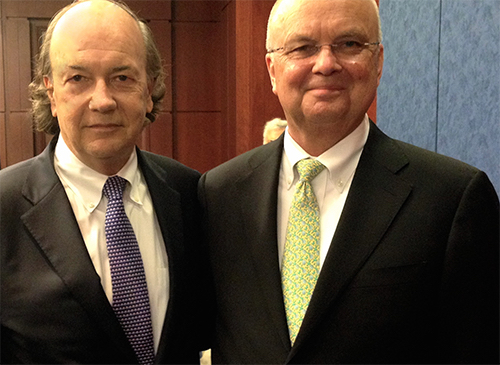 From 1999 to 2005, he was Director of the National Security Agency, NSA, based at Fort Meade, Maryland. The NSA is America’s lead agency for electronic and technical spying. For many years, the mere existence of the NSA was classified information; intelligence community members said the acronym NSA stood for “No Such Agency.”

Finally, in 2006, Hayden became the 20th Director of the CIA where he served until 2009. Given Mike Hayden’s long career in military and civilian intelligence agencies, and his expertise in both electronic intelligence (ELINT) and human intelligence (HUMINT), it is no exaggeration to call him “America’s Top Spy.”

This was not my first meeting with General Hayden. In an earlier meeting while he was still at CIA, he told a fascinating story about his time as a military attaché at the U.S. Embassy in the then People’s Republic of Bulgaria during the Cold War.

He would board a train and simply travel from one end of the country to the other making mental notes about armored vehicles seen at rail sidings, coal loadings, and other indications and warnings that provided insight into the state of the economy there. He looked for the presence of any Soviet troops.

In one encounter, he was seated in a shared train compartment with three young Soviet soldiers.

They saw his U.S. Air Force uniform and assumed he did not speak Russian. They proceeded to start drinking on the train and spoke in an unguarded manner among themselves becoming more animated and loquacious as the vodka flowed.

Finally, just before disembarking, General Hayden greeted the Soviet soldiers in fluent Russian. Their faces turned white as they realized he understood every word they said.

On other occasions, Hayden dressed in simple street clothes and listened in on conversations among construction workers to get an idea about consumer prices, food and fuel availability and other basic economic indicators.

Often the best spies are not those in the glamorous James Bond mold, but those who patiently practice simple tradecraft combined with a good knowledge of foreign languages and culture.

Mike Hayden was certainly helped in these efforts by his blue-collar roots in Pittsburgh including time as a taxi-driver working his way through college and graduate school.

My conversation with General Hayden focused on my own specialty, market intelligence (MARKINT), and the ongoing financial wars between the U.S. and Russia and Iran.

In effect, asset freezes would replace cruise missiles as a way to disable an enemy.

The U.S. was in a financial war with Iran from 2011 to 2013 prior to the start of formal negotiations with respect to Iran’s uranium enrichment. Secret negotiations had been going on for years, but the U.S. wanted to bring pressure to accelerate the pace of negotiations and produce concrete results. The negotiations were intended to avert an attack either by Israel or the U.S.

The U.S. first excluded Iran from the dollar payments system, but Iran simply switched its payments to euros, Swiss francs and other hard currencies.

Next, the U.S. and its allies kicked Iran out of the global payments system, called the Society for Worldwide Interbank Financial Telecommunication, or “SWIFT.”

This meant that Iran could ship oil but could not get paid in hard currency. It also meant that Iran had to resort to gold and barter to obtain needed imports of gasoline and other essential goods.

Exclusion from the global payments systems caused Iranians to withdraw their money from local banks so they could purchase smuggled dollars on the black market.

This run on the banks forced the central bank of Iran to raise interest rates. The black market dollar exchange rate showed the Iranian currency had lost half its value.

The result was hyperinflation in Iran. The combination of bank runs, inflation, currency collapse, sky-high interest rates, and shortages of imported products was highly destabilizing. At that point, the U.S. could have tightened sanctions ever further, possibly causing regime change in Iran.

Instead, in December 2013, President Obama removed many of the sanctions in exchange for the start of formal negotiations on Iran’s nuclear weapons program. Those negotiations have dragged on ever since and are nearing the point of a final deal that will be put to the Congress for consideration. The final deal has not yet been revealed but the broad outlines are known.

General Hayden calls this a “bad deal” for America because it lacks verification procedures.

America was winning its financial war with Iran, but then declared a truce before the job was done. Now we are facing an unverifiable nuclear deal with Iran. If the inspections regime breaks down, which it probably will, America may return to financial warfare with Iran. The procedure for reimposing financial sanctions if Iran does not live up to its obligations under a nuclear deal is called “snapback” authority.

America is in another financial war with Russia in response to Russia’s annexation of Crimea and its support for separatists in eastern Ukraine. Severe financial sanctions have been imposed on Russia including a ban on refinancing hard currency corporate debt in U.S. or European capital markets.

The U.S. and its allies have not yet kicked Russia out of the SWIFT payments system, a process known in financial warfare circles as “de-swifting.” The Russian Prime Minister, Dmitry Medvedev, has said that de-swifting Russia would be regarded as an “act of war” subject to military retaliation. Russia’s ability to retaliate against the United States in a financial war is much greater than Iran’s. Russia has a 6,000-member cyber-brigade who are capable of closing down U.S. stock exchanges and banks. Russia would not use these tactics casually, but would use them if U.S. economic pressure becomes too severe.

Given this recent history of financial warfare with Iran and Russia, I asked General Hayden if the U.S. was possibly overusing its financial weapons. Today, these weapons are extremely powerful. But, the history of warfare reveals that every offensive weapon is first countered with strong defenses, and then eventually made obsolete by improved offensive weapons of the enemy.

With the U.S. putting financial pressure on Iran, Russia, and China, wasn’t it likely that these countries would create their own payments systems, develop their own banks and reserve currencies, and turn their back on the U.S. dollar system entirely?

If Russia, Iran, China, Turkey and others no longer relied on U.S. dollars, then control of the dollar system would lose its potency as a weapon. Specifically, I asked if the U.S. was taking the dollar for granted as a source of strength in financial warfare.

General Hayden agreed this is a problem, if not today, then in the not-too-distant future. He said, “The more you use sanctions, the less effective they become because you motivate your adversaries to develop alternative payment systems. I’m not sure if an alternative payment system will be built before we might want to snapback sanctions on Iran, but if it’s not over this ridgeline, it’s over the next one.”

General Hayden also alluded to what he called “The dynamic of the unpleasant fact.” He said this happens when you have to deliver truly bad news to the president. He said a conversation might begin with, “Sir, that war we planned starts today…”. In today’s battlespace, that statement could just as well apply to cyber-attacks on stock exchanges as dropping bunker-busting bombs on Iran.

For investors, the implications of this new age of financial warfare are profound. Stock and bond markets have always been affected by wars. But the wars were fought elsewhere — stocks and bonds merely adjusted in price to the new state of the world.

Today, markets are not bystanders; they are ground zero. It’s fascinating to meet brilliant military and intelligence officials like General Hayden who are rapidly absorbing the fact that wars are now fought in financial markets rather than on physical air, sea and land.

The military and intelligence communities are absorbing the new reality, but most investors are still behind the curve. Traditional stocks and bonds are digital assets that can be hacked, wiped-out or frozen with a few keystrokes. It’s important to allocate part of your portfolio to physical assets that cannot be wiped out in financial warfare.