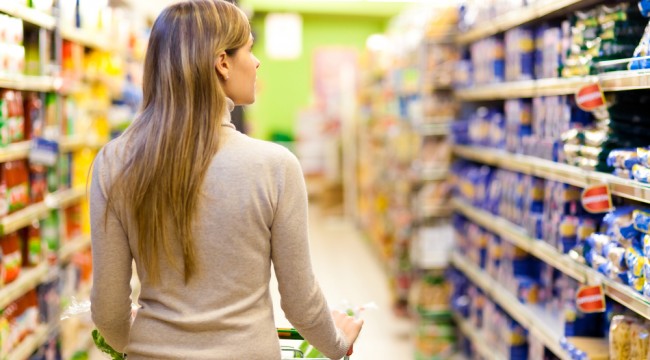 What Your Grocery Bill Says About Your Investment Future

For as quickly as food prices are rising, we Americans still have it good compared with the rest of the world.

The typical U.S. household spends 6.6% of its monthly budget on food — the lowest among more than 20 countries recently reviewed by the Department of Agriculture. If you include meals out, it’s more like 11%. 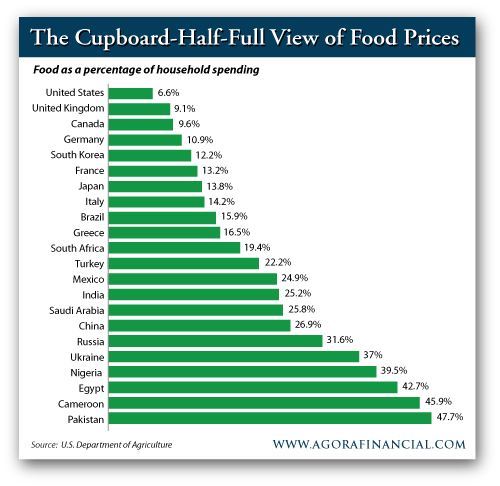 What accounts for the difference? According to a press release from the Texas Farm Bureau, “Europe’s tax system on food, U.S. government farm subsidies and farmers and ranchers’ conservative farming on less land — but able to grow more food — all help to lower the price of food.”

Aha! So even the agribusiness industry admits that 6.6% figure excludes the portion of your tax bill that goes to farmers paid not to grow crops, among other boondoggles.

“The competition is intense in the food industry,” says our income specialist Neil George. “Companies are scrambling to gain an edge.

“One way they’re trying to do that is to buy out competitors. There were a record $93 billion in merger and acquisition deals in 2013, and so far this year there have been $71 billion in announced deals.

“We’ve seen bidding battles between Tyson Foods, Hillshire Brands and Pinnacle Foods that ended with Tyson bringing Hillshire under its wing. Then we had Post Holdings grab Michael Foods in a mega-deal. Hormel announced a plan to grab CytoSport, the makers of Muscle Milk, to advance its ‘protein’ processed food business. And Archer Daniels Midland bought Wild Flavors of Switzerland.”

“But there are still plenty of small to midsized firms out there that are just ready to be bought out,” says Neil. “So I expect to hear about more big mergers and takeovers in the weeks ahead.”

In the meantime, stocks are selling off to begin the week. Whether because of “geopolitical tension” or other reasons, every major U.S. index started the day down at least a half percent, but no more than 1%.

Bonds are benefiting, the yield on a 10-year Treasury tumbling to 2.45%.

“The stock market and economic fundamentals are on a collision course,” writes The Death of Money author Jim Rickards. “One or the other will have to swerve.

“Either the economy will have to improve rapidly and unexpectedly and reverse its fundamental weakness, or inflated stock values are heading for a precipitous fall,” Mr. Rickards writes in his hometown paper, the Darien, Connecticut, Times. “The evidence suggests that the latter is more likely.”

Among the lousy signs he sees…

“This triple-whammy of declining full-time jobs, declining productivity and slowing capital investment means that real wages are stagnant,” Rickards explains. “If workers can’t make more, they can’t spend more without borrowing. Borrowing is more difficult because home equity has not recovered from the 2007 housing crash and lending standards are the most stringent in years. Companies won’t invest in equipment if consumers can’t spend…

“The conundrum is complete. Stock indexes march to all-time highs while economic fundamentals fall apart. The two will be reconciled either with a spectacular turnaround in growth or a spectacular collapse in stock prices.”

If you haven’t guessed already, he’s counting on the latter. Heh…

“I want companies that can grave dance,” says our Chris Mayer — keenly aware of those all-time highs.

“Grave dancing” means the ability to buy dirt-cheap assets others have given up for dead after a boom-and-bust cycle. It’s a term taken from Sam Zell, the bearded motorcycle-riding, profanity-spouting septuagenarian who made his fortune in commercial real estate. He never got as famous as Trump because The Donald did deals in the media epicenter of New York, while Zell plied his trade in Chicago.

More than half the plays in Chris’ Capital & Crisis portfolio are poised to snap up bargains in both businesses and real estate. By the way, his average position is up 55% in 16 months.

Ed. Note: One opportunity Chris is especially keen on is a chance for you to do some grave-dancing of your own, six years after the Panic of 2008. The bank bailouts made possible a unique opportunity to make up to five times your money during the next four years. And in today’s issue of The 5 Min. Forecast, readers had an exclusive chance to get in on it for themselves. It’s just one small benefit of being a reader of the market-leading 5 Min. Forecast. Click here now to discover how you can get join this unique list of in-the-know investors.