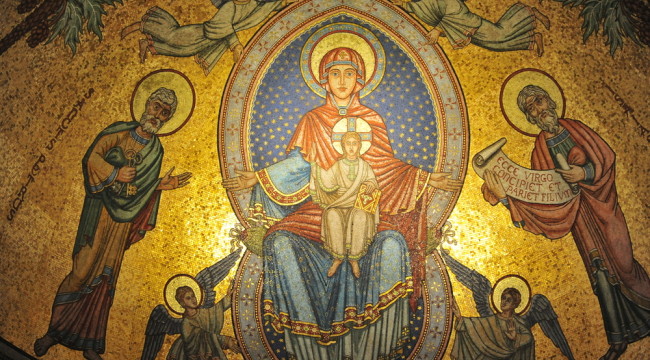 What is the Impossible Trinity?

Editor’s Note: Two trinities to consider on this, the day after Christmas…

The Father, Son and Holy Ghost…

Which is the “impossible trinity”? And why does it matter? Read on…

The Impossible Trinity is a simple rule with deep implications. It was first uncovered by Nobel Prize-winning economist Robert Mundell in the early 1960s.

The rule is that a country cannot have an independent monetary policy, an open capital account and a fixed exchange rate at the same time.

You can have any two of those three conditions. You can even have only one or none if you like. But you can’t have all three at the same time. If you try, you will fail — markets will make sure of that.

Those failures (which do happen) represent some of the best profit making opportunities of all. Understanding the Impossible Trinity is how George Soros broke the Bank of England on Sept. 16, 1992 (still referred to as “Black Wednesday” in British banking circles). Soros also made over $1 billion that day.

Understanding and using the Impossible Trinity works wonders if you can spot the right conditions and set up your trades in advance of the inevitable policy failures of the central banks.

Here’s how it works…

The first part of the Impossible Trinity is an independent monetary policy.

The second part of the Impossible Trinity is the open capital account.

This refers to the ability of investors to get their money in and out of a country quickly and easily. If you want to invest in China, you’ll have to take your dollars, convert these to the yuan, and make the yuan investment in whatever stocks, bonds or direct foreign investment you choose.

Sometimes you don’t do this yourself; your broker does it for you. If you buy a Chinese based exchange traded fund (ETF), you may think you’re buying a dollar-denominated security on the New York Stock Exchange.

But behind the curtain the ETF sponsor has to go out and buy the actual Chinese stocks to make the ETF work. Either directly or indirectly, your dollars end up in the hands of the People’s Bank of China, which issues yuan to complete the local stock purchase.

Or, let’s say you’re a global corporation like IBM or General Electric and you want to invest $1 billion in a factory in Australia or Brazil. The same idea applies.

The investor dollars end up in the target country central bank, and the investor gets local currency to complete the purchase. This is one way central banks build up their reserves of U.S. dollars and other hard currencies, (the other way they build reserves is from trade surpluses).

So far, so good. Now let’s say you want to sell your investment and get your money out of the foreign country.

The process we just described works in reverse. The foreign central bank takes the local currency proceeds from your sale and gives you U.S. dollars from its reserves.

This process of easily getting in and out of a foreign investment, and getting dollars when you want them is the essence of an open capital account. It’s like a revolving door — smooth, fast, and easy to get in and out.

But sometimes the revolving door gets stuck with you in it. This happens when a central bank slaps on capital controls and doesn’t let your money out of the country. Then the revolving door is more like the Hotel California, (“You can check-out any time you like, but you can never leave.”) When this happens, we say the country has a closed capital account.

The third part of the Impossible Trinity is a fixed exchange rate.

This simply means that the value of your currency in relation to some other currency is pegged at a fixed rate.

Of course, formally binding pegs were abandoned in the international monetary system in 1974. This was not long after U.S. President Richard Nixon ended the convertibility of dollars into gold at a fixed rate. Since 1974, all major currencies have technically been floating against others.

But many countries do implement currency pegs informally using central bank intervention and other policy tools.

For example, the Chinese yuan was informally pegged to the U.S. dollar at a rate of about 6.2-to-1 for most of 2014 and 2015. China unexpectedly broke the peg in August 2015 (causing a meltdown in U.S. equity markets) and devalued the yuan to 6.3-to-1. Since then the yuan has been devalued further, and now trades at about 6.48-to-1.

Many countries pursue formal and informal pegs to other currencies, usually the U.S. dollar.

The diagram below represents the Impossible Trinity. In this schematic, the open capital account is labeled “A”, the fixed exchange rate is labeled “B,” and the independent monetary policy is labeled “C.”

The theory of the Impossible Trinity is that it is impossible for a country to achieve A+B+C at the same time. Any country that attempts this is doomed to fail:

That’s the theory. What about the practice? What’s so impossible about the Impossible Trinity?

Consider the case of a country — call it Freedonia — that wants to cut its interest rate from 3% to 2% to stimulate growth. At the same time, Freedonia’s main trading partner, Sylvania, has an interest rate of 3%.

In this example, Freedonia is trying the Impossible Trinity. It wants an open capital account, a fixed exchange rate and an independent monetary policy (it has an interest rate of 2% while Sylvania’s rate is 3%).

The arbitrageurs get to work. They borrow money in Freedonia at 2% in order to invest in Sylvania at 3%. This causes the Freedonia central bank to sell its foreign exchange reserves and print local currency to meet the demand for local currency loans and outbound investment. Printing the local currency puts downward pressure on the fixed exchange rate and causes inflation in local prices.

Country Freedonia may run out of foreign exchange forcing it to close the capital account or break the peg (this is what happened to the UK in 1992 when George Soros broke the Bank of England). Or Country Freedonia will print so much money that inflation will get out of control forcing it to raise interest rates again, (something like this has been happening to Brazil lately).

The exact policy response can vary, but the end result is that Country Freedonia cannot maintain the Impossible Trinity. It will have to raise interest rates, close the capital account, break the peg, or all three in order to avoid losing all of its foreign exchange and going broke.

This shows you how powerful the Impossible Trinity is as an analytic tool.

Once you see a country trying to achieve the Impossible Trinity, you can be sure their system will break down one way or another. You can begin to make investment decisions in anticipation of the breakdown.

Conversely, when you see a country avoiding the Impossible Trinity (by not targeting either A, B, or C in the diagram on the previous page), you can have more confidence in their economic management. That way you can make investment decisions based on that level of confidence.

The Impossible Trinity is a tool to separate countries with good policies from those with bad policies. It is also a tool used to make accurate forecasts based on the sustainability of those policies.

By the way, there is one big exception to the Impossible Trinity. That’s the United States.

The U.S. sets interest rates independently and has an open capital account. The U.S. does not officially peg the dollar to any other currency (thus technically not breaking the Impossible Trinity). But it does work with other countries to allow them to informally peg to the dollar.

Why does the U.S. not suffer adverse consequences? Because the U.S. does not need foreign exchange.

The dollar is the leading reserve currency in the world (about 60% of global reserves and about 80% of global payments), so the U.S. can never run out of foreign exchange to pay for things, it can just print more dollars! This is what the French called the dollar’s “Exorbitant Privilege” in the 1960s.

Now you see why so many trading partners are trying to escape from a dollar-denominated global system. The game is rigged against other countries, and in favor of the U.S. This is why the game won’t last. King Dollar’s days are numbered.

Using the Impossible Trinity to spot trends and make investment decisions requires a lot of analysis. There are three policies that can go wrong (A, B and C above), and three ways to fix them (again, A, B, and C). That gives nine basic scenarios (3 x 3 = 9), and many more when you consider hybrid or combined policies, (a country could devalue its currency and slap on capital controls at the same time).

You don’t need to sweat the details or get a Ph.D. in economics to use the Impossible Trinity. That’s what we do for you at Strategic Intelligence. We’re always on the lookout for nonsustainable policies that are bound to break.