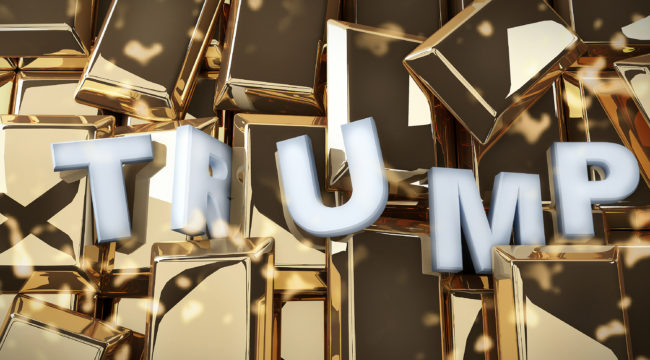 What If Trumpflation Doesn’t Come?

At last check, the index is down fractionally at 19,957. The other major stock indexes are down a bit more. Treasury yields are backing down, the 10-year at 2.55%.

The only economic number capturing traders’ attention today is existing home sales — up 0.7% in November, driven by condo sales.

A lesser-followed economic number is also out today — the Philadelphia Fed state coincident index, a composite of four job indicators in all 50 states. We follow this index because it has a good track record of foretelling recessions.

And while the number was flirting with recessionary territory over the summer, it’s recovered smartly the last two months; today’s reading for November is the strongest in over a year.

“A new low of $950 per ounce is not out of the question based on Fed tightening and resulting dollar strength,” he tells readers of Rickards’ Gold Speculator. “The dollar price of gold is simply the inverse of the dollar. A strong dollar typically results in a lower dollar price for gold.”

What would the setup for $950 look like? “The Fed expects ‘reflation’ under Trump,” Jim explains, “and begins leaning in with rate hikes designed to cut off inflation. This would be the result of Yellen’s belief that tight labor markets plus stimulus equals inflation (the Phillips curve) and her belief that monetary policy acts with a lag (thus the need to act now).”

To no small degree, this is exactly what the Fed declared last week when it laid out plans for three interest rate increases next year… after only two in the last 13 months, the only ones since the Panic of 2008.

But what if “Trumpflation” doesn’t come into being?

Back to Jim’s scenario amid Fed tightening: “The Trump reflation never happens. Instead, Congress pushes back against tax cuts that are not revenue neutral, and opposes big spending plans.

“Meanwhile, the economy in not as strong as many believe. We’re in the eighth year of an expansion, so there’s not much bang for the buck in terms of new spending. We will experience diminishing or negative marginal returns to so-called stimulus.”

Under this scenario, the stock market is getting way ahead of itself — and a violent correction follows. “By the time the Fed sees its blunder and tries to reverse course, it will be too late.”

“They won’t be able to cut rates enough to steer out of the recession. Negative rates and QE4 won’t be effective. The cheaper Chinese yuan and weak euro will make it impossible to cheapen the dollar as a way out. The stock market could crash 30% or more.”

That’s deflation: Asset managers dump whatever they can to raise cash. Gold isn’t spared. That’s what could send gold to $950.

“Gold wins in the end, but it could be a volatile ride, with new lows possible. That’s not a bad thing for those still building their positions, especially in gold miners, which are even more volatile than gold. You should use occasional drawdowns to add to your position.”