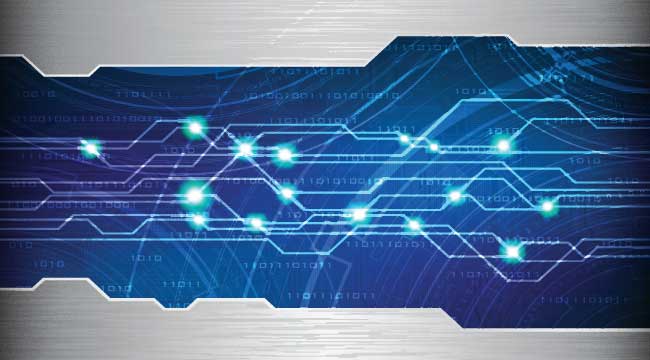 What High-Tech Cannot Function Without

Not long ago I was in Toronto for a couple of days for a conference on what people in the resource space call “Technology Metals.” These are critical elements that go into all manner of advanced materials, electronics, optics and more. Without technology metals, most modern technological systems won’t work like the builders advertise and users desire.

In a global economic sense, all sorts of people and companies produce all manner of technology metals. Technology metals are key to many supply chains, such as high-priority military technology.

For example, Boeing builds airplanes. Much of the structure and skin of airplanes is made of aluminum. So Boeing buys aluminum from, say, Alcoa, which in turn has a chain of processing facilities, smelters and ore in the ground at mine sites, located in faraway corners of the world.

Or Boeing buys jet engines from, say General Electric. GE has all manner of suppliers who build parts and components for those engines. The suppliers, in turn, have their own supply chains, including for exotic, high-strength metals like titanium. Eventually, when you trace the flow for titanium, you’ll find an ilmenite deposit in the rocks of, perhaps, Quebec, or a sandy beach in Australia.

That’s where rare earths (RE) come in. Rare Earth’s (RE) are a set of elements that are critical to the design and manufacture of futuristic high-tech weapons and systems, especially energy weapons like lasers and rail guns.

The fact is, however, that many important global supply chains these days are dominated by producers whose first language is Mandarin. About 95% of the world’s rare earths (RE) come out of China. That’s a serious issue, in terms of security of supply.

Looking ahead, it’s crucial to the U.S. military – and to the defense side of Canada, other NATO nations, Japan, South Korea, Australia and other allied nations – to secure critical elements up and down the technology food chain. In other words, the strategic industrial challenge for the West is to bring new RE suppliers into the field and ultimately develop its own sources of RE.

But first, we need to understand what RE are, what they do and why it matters when you can’t get them. It’s a matter of chemistry. RE are the Lanthanide Series of elements on the Periodic Table. 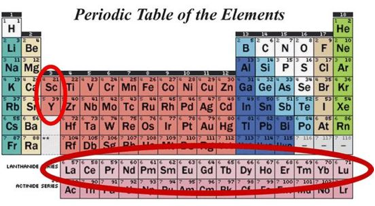 Lanthanide elements have unique chemical and physical properties, which lead to all manner of technological miracles. For example, you need cerium for glass polishing, which is crucial to top quality optics. Neodymium and dysprosium are essential to strong permanent magnets, which go into powerful motors. Erbium and terbium are important phosphors for lighting systems. Yttrium is critical to high-temperature metal casting. And there’s more.

Here’s a specific, RE-themed example. The very exotic, poorly understood element scandium (Sc) improves structural strength in aluminum by literally orders of magnitude. Adding about .2% (by weight) of scandium, to aluminum, will dramatically improve the alloy’s strength, flexibility, resistance to corrosion and the ability to weld the metal, versus using rivets. (It’s almost impossible to break the wings of certain Russian fighter planes – MiG-29 comes to mind – because of the Sc-Al alloys in the wing spars.)

The Way to Star Trek Technology

If you want to manufacture exotic metals, powerful electric motors, complex electric power systems, super-strong magnets, advanced optics, advanced electronics and all manner of other gee-whiz things, you land squarely in the RE and materials space. If you don’t have RE, you just can’t get there from here.

That’s good news for investors. But the biggest challenge everyone in the West seems to face is that in many respects, we don’t really know what we don’t know about many of the RE elements, because so few people do research and development (R&D) with these forms of matter. That’s not a good reflection of Big Science in the U.S.

Tom Wolfe’s great book about the early days of the U.S. space program, The Right Stuff describes our current situation rather well.

At one point, Wolfe was discussing the importance of funding for R&D, and described a get-together between the original seven Project Mercury astronauts and members of the Mercury space capsule design team. The astronauts wanted a window in the capsule, along with an emergency exit door and flight controls. The designers balked.

The designers stared at Cooper. You could tell that they wanted to argue fine points of physics, rocketry and structures. Besides, they were the designers, and didn’t want to be bossed around by a bunch of jet-jockey pilots.

Then astronaut Gus Grissom chimed in, saying “He’s right. No bucks, no Buck Rogers.” (There’s a fabulous depiction of this encounter in the movie version of the book.)

The point is: technology has a cost. You can accomplish much if you have both time and funding. But at the edge of the technical envelope, nothing is easy. There are only many hard, expensive choices.

Yet in spite of these challenges, The U.S. Department of Defense (DOD) has made stunning progress on electromagnetic rail guns, as well as laser systems.

Electromagnetic rail guns, for example, use magnetic force to hurl projectiles downrange. In the olden days – like, for about the past 500 years – people used gunpowder to shoot cannonballs, shells, bullets and the like. Looking ahead, much of that chemical propellant is going away, replaced by what physicists call Lorentz Forces.

But rail guns require complex power generation and management systems. That means powerful motors, complex generators, electrical storage in batteries and capacitors, control electronics, optics and all manner of other components. I see RE up and down this supply chain.

Or consider lasers. Right away, we’re talking about neodymium-doped optical glass, as well as numerous other phosphors. Then there are power systems, storage media (batteries and capacitors), electronics, aiming systems and much more.

All in all, we’re looking at the transformation of military tech by super-advanced materials and electronics, optics and more.

What You Must Know for RE Plays in High-Tech, Mil-Tech and More

If you’re going to buy into RE, go gently and spread your funds around. Don’t “back up the truck,” as the saying goes. Bid patiently, with strict limits near the recent plateaus. If you start buying with bushel baskets, you’ll just kick up the volume, invite a frenzy, and the day traders will eventually nick you down, penny by penny.

You need to understand that the RE space is fluid, and fraught with risks. Right now, most money managers, institutions, funds, brokers and many investors don’t just hate the RE space, they loathe it because of past losses.

Then again, most of the trading houses never really understood RE, and don’t particularly understand what’s happening right now in the space. Their experience comes from a few years ago, when we had a RE boom that morphed into a bubble, which has popped.

Along the way, during the bubble blow-up, many investors and management teams thought they were geniuses, and that this RE stuff was kind of a piece of cake.

Well, experience is a hard teacher. Now, in the wake of the RE share price crash, we have a number of companies that are much better today than about two years ago, yet the share prices are a small fraction of what they used to be.

That is, today we have smarter management. We have better-understood mine and mineral assets. We have better chemistry and metallurgical flow sheets. The downstream market relationships are forming up for RE suppliers. Yet nobody wants to buy the shares.

Thus, for tech investors, this seems to be a reasonable time for bottom fishing, although you have to know that even this market bottom still may have sub-sub-sub-basements.

Say Goodbye to the World As You Know It

The continued demand for AI technology means big things for the industry. We’re entering a prime time of exponential growth for AI that could earn early investors fortunes. Today Ray Blanco explains how.