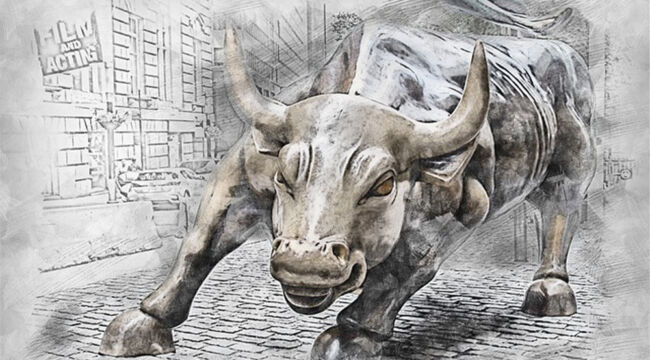 Consensus guessing had come in at 2.8% annualized growth. What is the actual figure?

It nonetheless represents the poorest quarterly progress since last year’s second quarter… when the gross domestic product took a 31% whaling.

Overall, this is a big disappointment given that the consensus expectation at the start of the quarter in July was for a 7.0% gain and even our own bearish 3.5% forecast proved to be too optimistic.

Mr. Ashworth has evidently failed to take aboard the counsel of Washington Post columnist Micheline Maynard:

“We’d do ourselves a favor by consciously lowering expectations.”

Poor economic data keeps the Federal Reserve at the liquidity gauges. It means the business rolls on that much longer.

The Nasdaq Composite — as Yahoo Finance informed us — went galloping to a fresh record today, up 212 points.

Meantime, Main Street scratches by on the leavings. Yet today we declare fabulous news…

Main Street relief is just across the horizon…

Our field agents report Dr. Paul Krugman is atop his sturdy pale steed, barreling in at flank speed. The dust cloud is in sight.

He carries in his skull the most sizzling and stupendous solution to economic privation yet crafted.

A thousand Einsteins strung together could never approach its high genius, its prodigiousness.

Here is this mastermind’s grand economic fix, chiseled down to its granite nucleus:

Tax the rich “for the children.”

Nominate That Man for Another Nobel Prize!

Here is genius itself, flowing out in golden spate:

Tax the rich, help America’s children. This gets at much of what the [proposed “infrastructure”] legislation is likely to do: Reporting suggests that the final bill will include taxes on billionaires’ incomes and minimum taxes for corporations, along with a number of child-oriented programs. And action on climate change can, reasonably, be considered another way of helping future generations…

They’re very good ideas from an economic point of view. They’re extremely popular. And they’re very much in the American tradition.

How do you like it? Has such brilliance as this ever dazzled you so, staggered you so, clobbered you so?

We hereby nominate Dr. Krugman for a second Nobel Memorial Prize in the Economic Sciences.

A rascal might counter that limited government is likewise very much in the American tradition.

But pay him no heed. That is a long-junked tradition.

Because This, Then That

The U.S. economy grew faster during periods when taxes at the top were relatively high than it did when they were low.

There is vast justice here. For example:

It showed all other economies its heels. And top marginal tax rates were never higher.

Post hoc ergo propter hoc, you argue. That here the rooster claims credit for the dawn.

You claim the 1950s’ United States economy outdid all others since much of Europe and Asia — with their rival industries — were yet clawing out of WWII’s bomb rubble.

Moreover, you yell that higher tax rates do not equal higher tax hauls. That the 91% tax rate on the tiptop 1%  — for example — yielded a mere 16.9% effective rate during the same 1950s.

Well, you are certainly gone from your wits, a bedlamite fit for the sanitarium, and 180 degrees off the facts. We will not listen!

“We are also, arguably, the nation that invented progressive taxation.”

We are also, inarguably, the nation that invented atom bombs, you counterfire. Does that justify their use?

Once again you fail to recognize genius. Do you not realize that to whom much is given, much is expected? That the wealthy must pay a share that is fair?

Capital migrates to where it’s treated well. It’s as basic as that. And since no other developed country taxes wealth in the aggressive way that the Democrats are proposing, passage of their proposed tax would result in a massive flight of human and financial capital out of the United States. In other words, a wealth tax would result in a mass exodus of the people and investment that make wealth creation possible in the first place.

We simply forbid you to invoke the horrendous Henry Hazlitt and his hidebound Economics in One Lesson:

When a corporation loses a hundred cents of every dollar it loses, and is permitted to keep only 60 cents of every dollar it gains, and when it cannot offset its years of losses against its years of gains, or cannot do so adequately, its policies are affected. It does not expand its operations, or it expands only those attended with a minimum of risk. People who recognize this situation are deterred from starting new enterprises.

Thus old employers do not give more employment, or not as much more as they might have; and others decide not to become employers at all. Improved machinery and better-equipped factories come into existence much more slowly than they otherwise would. The result in the long run is that consumers are prevented from getting better and cheaper products, and that real wages are held down…

In brief, capital to provide new private jobs is first prevented from coming into existence, and the part that does come into existence is then discouraged from starting new enterprises. The government spenders create the very problem of unemployment that they profess to solve.

You claim higher taxes on the uppermost depress wages for the middle and bottommost? That government spending equals economic sabotage?

That the policies Dr. Krugman blesses would injure the very children they are intended to benefit?

Never in our existence have we encountered such shrieking blasphemies as these.

We declare you a barbarous and implacable foe of American youth. We further declare you an economic royalist and heretic against the doctrines of Lord Keynes.

We will rope you to a stake encircled by uniquely flammable materials.