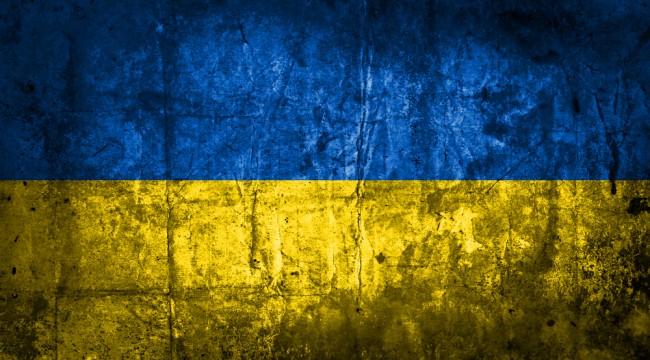 Like usually, you are politically confused. You don’t know which way you can criticize Biden, the Democrats, the media and the right wing’s imagined enemies except you have no alternatives to offer; you would like to see America ruled by some authoritarian regime who would abolish the Constitution, the institutions and the media and return to the ’50s. Your analyses that you think are a normal discourse are always off and sound a little crazy…

Your editor delights to learn that he is merely “a little crazy.” Even he suspects — at times — that a deeper psychological affliction besets him.

And he concedes it at once — without let, without hindrance, without reservation — he is “politically confused.”

Witness, for example, their conjoining on Ukraine. The majority on each side is hot for anti-Russian action. There is very little light between them.

When both sides squeeze together in bipartisan union… your editor begins to perspire at the forehead. He is largely with author Thomas Woods:

There are only two (major) parties today: The Stupid Party and The Evil Party. Once in a while the two parties get together to do something that is both stupid and evil, and that’s called Bipartisanship.

How do Stupid Party and Evil Party interests align in Ukraine?

We hazard the administration is eager to deflect public focus from inflation, the flagging economy and its pandemic totalitarianism. Do not forget: This is an election year.

The Republican half of the bipartisan bloc is enticed by the sweet plums of American exceptionalism and American greatness. They get to yell about freedom and the shining city on the hill.

And so you have your bipartisanship… stupid and evil though it may be.

Let us now continue with J.B.’s bill of complaint against us…

Do we yearn  — as J.B. claims — to be “ruled by some authoritarian regime who would abolish the Constitution, the institutions and the media and return to the ’50s”?

With the highest respect to J.B.: The Daily Reckoning is heart and soul for free men, free markets, free minds and free expression.

We wash no brains, bind no hands and tape no mouths. Moreover, we are fiercely against those who would.

That is, this publication is against any “authoritarian regime who would abolish the Constitution, the institutions and the media.”

Yet J.B. is correct when he claims your editor offers no “alternatives.”

Your editor is not out to convert minds, hearts or souls. He is no preacher. He is no missionary. He is no tub-thumper.

He is instead an anatomist, and in certain instances an autopsist.

He approaches the business with the serene detachment of a man who takes the world as he finds it — not as he would rather it.

He merely tacks his humble note to the community bulletin board. Passersby can pause, give it a look, take it aboard… or they can simply turn away and push on… as they please.

It is all one to him. Yet J.B. is not through with us…

The Republican [Party] is overtaken by angry white men like you who can’t stand the evolution of America and miss the ’50s when they felt [like] the masters of everyone who is not a male, white and Christian. It has become a cult. It follows QAnon cult and crazy-town conspiracies.

Get over it! America is a diverse, multicultural, multi-ethnic country. The only thing that unites us is the Constitution and the rule of law that you are trying to abolish.

Just so. Yet where is our anger? And your editor did not infest this planet Earth during the 1950s. He cannot therefore miss them, anymore than a blind man can miss the colors he has never seen.

And precisely what are “QAnon cult and crazy-town conspiracies”? Where have we peddled them?

And how precisely do we aspire to abolish ”the “rule of law”? Once again, we request specific evidence.

We are confident — supremely — that none is available. We will happily take correction if mistaken.

The two may share an identical exterior. Yet two different spirits animate them. One is stern, one is soft.

How Can You Defend Putin?

Tyranny anywhere is tyranny everywhere. We have to stand against tyranny that Putin is trying to impose on Europe and the rest of the world. Biden is doing the right thing; praise him as an American for a change! Give credit where credit is due. Putin is not a friend of freedom, he is a thug, a tyrant and a war criminal. You can’t as an American defend him or apologize for him directly or indirectly.

Your editor would inform J.B. that he pounds no politician’s tom-toms. Nor does he shout any politician’s “praise.”

A very limited number of exceptions exist. So rare are they that we need not list them.

Your editor believes the bulking majority of politicians are rascals… and the sitting president offers no exception.

If J.B. seeks rah-rahs and cheers, he will not find them here. He has come to the incorrect address.

A Strange Defense of Putin

Mr. Putin naturally sorts into the rascal’s camp. We certainly do not “defend him or apologize for him directly or indirectly,” as J.B. intimates. With the pleasure of repeating ourself:

Mr. Putin is of course the high villain in this morality tale — and justly so. His hands are red with the blood of many, many thousands. He can never rinse it away.

And we would remind the Russian autocrat: As all men, he will one day stand before St. Peter. His deeds will judge him, regardless of his earthly station.

We do not expect Peter to stamp the fellow’s passport.

We would consign this man to damnation everlasting… and yet we defend him? It is a very strange defense.

We merely counsel prudence in dealing with a potential foe who roosts upon a vast stockpile of atomic toys — and who has hinted at playing with them.

Our Patrick Henry claims that tyranny anywhere is tyranny everywhere. It is lovely rhetoric, we concede.

We would argue neither is true.

We have no doubt that J.B. means the best in the world. He is on the side of the angels and saints.

Yet if J.B. is out to scotch tyranny anywhere and everywhere he finds it… he will be extremely busy on multiple fronts… for an extremely long time.

He will also be bankrupted — putting down tyranny is costly business — as the United States has discovered these past several years.

And as its war hawks circle over Ukraine…