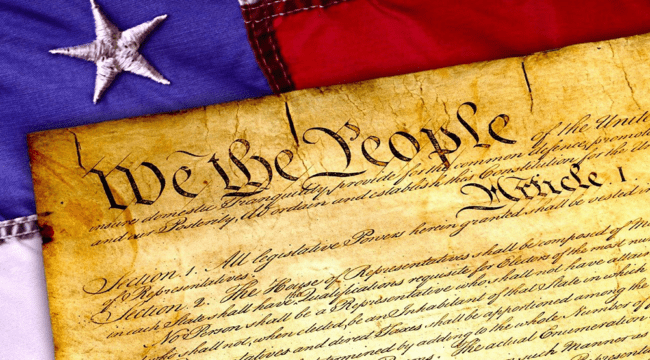 Few Americans realize the high day exists. Fewer yet will hoist a cheering toast in honor of the nation’s founding charter — the first written constitution in Earth’s history.

Nor will your seditious editor celebrate Constitution Day.

That is not because he scorns or abominates the United States Constitution… but because he reveres it.

It has been distorted beyond semblance.

The original constitutional text remains, it is true. The original procedures and formalities remain.

The constitutional republic has its three branches of government. It has its official separation of powers. It has its protocols and decorums.

There you will discover astonishing discombobulations of the bodily processes.

The appendix assumes the powers of the spleen… and the spleen is reduced to an appendage.

In all, the original constitutional anatomy is scarcely recognizable.

On What Constitutional Authority?

We lift our pocket Constitution from our breast pocket, where it is permanently stationed — near our heart — a heart that pumps blood, though icy blood.

We consult Article 1, Section 10, Clause 1 of the United States Constitution, which reads, in part that:

“No State shall… make any Thing but gold and silver Coin a Tender in Payment of Debts.”

Is there a state today that accepts gold and silver Coin a Tender in Payment of Debts?

Please inform us if there is a state. It will be our next address (our minions inform us certain states are considering it).

Next we thumb to Article II, which limits presidential powers to:

Where does the Constitution authorize the president to mandate vaccination… determine the wages of federal contractors… suspend oil production on federal lands or offshore waters… to name some.

We conclude the United States Constitution has endured what old Greek Aristotle labeled “a revolution within the form:”

People do not easily change, but love their own ancient customs; and it is by small degrees only that one thing takes the place of another; so that the ancient laws will remain, while the power will be in the hands of those who have brought about a revolution in the state.

We have in fact two United States Constitutions…

The Old Testament Constitution represents what the legal men term a “charter of negative liberties.”

It binds and shackles the federal authority. It throws up a cordon around it. What is the Bill of Rights but a charter of negative liberties?

Congress shall make no law…  shall not be infringed… The right of the people to be secure… No person shall be… the accused shall enjoy the right to… shall not be construed to deny or disparage (other rights) retained by the people.

The needs of the day — we are told — required an energetic, centralizing government… busy on ever-expanding and previously uncontested fronts.

Social Security is but one example.

The Great Society legislation of the 1960s was perhaps the New Testament Constitution’s high moment, its apotheosis, its grand culmination.

Government That Does for You Must First Do to You

The helping government constitutes, in brief, a menace.

Of course… we understand others hold an opposite view. We have no heat against them.

Yet of this we are certain: The “parchment barrier” of the Constitution could never restrain men determined not to be restrained.

There is much justice in this comment… at least as we see it.

The Constitution Wasn’t Written in Stone

The nine members of the Supreme Court are the high priests and priestesses of the New Testament Constitution.

It is they — and they alone — who interpret scripture under the New Testament.

The drafters of the Old Testament Constitution, in contrast, left the business to the People.

That is, the original United States Constitution blessed future updating. But only through the amendment process.

“If there are errors, it should be remembered, that the seeds of reformation are sown in the work itself,” argued signer James Wilson in 1787.

Surrounded by difficulties, we did the best we could; leaving it with those who should come after us to take counsel from experience, and exercise prudently the power of amendment, which we had provided.

No less a personage than Tommy Jefferson — author of the Declaration of Independence — argued the Constitution should be updated:

“Every 19 or 20 years”… to “be handed on, with periodical repairs, from generation to generation, to the end of time.”

What Happened to the Amendment Process?

In brief, the original Constitution is neither etched in granite… nor written in water. It is in between.

The people can amend the Constitution… providing the proposed amendment fetches two-thirds of both chambers of Congress — plus three-fourths of state legislatures.

That is, the burden is high. The Constitution would not be amended for “light or transient causes.”

The United States Constitution did not authorize an Air Force. Was a separate amendment required to authorize one?

Not under any rational interpretation, no.

The People retain to this day the authority to amend the document.

But the last amendment to the Constitution — the 27th Amendment — was stenciled in nearly 30 years ago.

That is because the amendment process is arduous. It is lengthy. And many lack the patience to wait… or trust the people to push things through.

And so they have effectively turned the business over to the Supreme Court of the United States.

The abstruse and nuanced legal insights of these clergy are beyond our slender abilities to appreciate.

The “penumbras and emanations” glowing from the constitutional text are visible to them. They are invisible to us.

That is, we are disqualified from service upon the Supreme Court of the United States.

But the clergy has blown so much life into the Constitution, so much vitality… the thing is so alive… it is nearly dead.

The Only Constant Is Change

Here we do not pass judgment. We merely observe… reflect… and stroke our chin, pensively.

Perhaps it was all inevitable.

Our co-founders Bill Bonner and Addison Wiggin, from Empire of Debt:

Institutions have a way of evolving over time — after a few years, they no longer resemble the originals. Early in the 21st century, the United States is no more like the America of 1776 than the Vatican under the Borgia popes was like Christianity at the time of the Last Supper…

In America, all the restraints, inhibitions and modesty of the Old Republic have been blown away by the prevailing winds of the new empire…

The United States Constitution is almost exactly the same document with exactly the same words it had when it was written, but the words that used to bind and chafe have been turned into soft elastic.

The government that couldn’t tax, couldn’t spend and couldn’t regulate can now do anything it wants. The executive has all the power he needs to do practically anything. Congress goes along, like a simpleminded stooge, insisting only that the spoils be spread around.