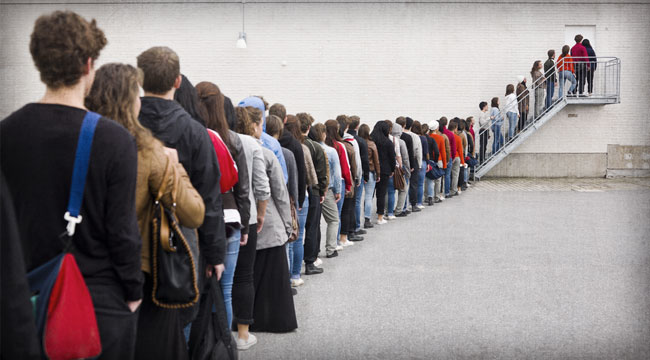 Welcome to the New Depression

The United States is living through a new depression that began in 2007. It’s part of a larger global depression, the first since the 1930s. This New Depression will continue indefinitely unless policy changes are made in the years ahead.

The present path and future course of this depression have profound implications for you as an investor. If you don’t grasp this once-in-a-lifetime dynamic you are at risk of seeing all of your wealth wiped out.

Calling the current economic malaise a depression comes as surprise to most investors I speak to. They have been told that the economy is in a recovery that started 2009.

Economists don’t like the word depression because it does not have an exact mathematical definition. For economists, anything that cannot be quantified does not exist. This view is one of the many failings of modern economics.

But no one under the age of 90 has ever experienced a depression until now. Most investors like you have no working knowledge of what a depression is or how it affects asset values. And economists and policymakers are engaged in a conspiracy of silence on the subject. It’s no wonder investors are confused.

The best definition ever offered came from John Maynard Keynes in his 1936 classic, The General Theory of Employment, Interest and Money. Keynes said a depression is, “a chronic condition of subnormal activity for a considerable period without any marked tendency towards recovery or towards complete collapse.”

The long-term growth trend for U.S. GDP is about 3%. Higher growth is possible for short periods of time. It could be caused by new technology that improves worker productivity. Or, it could be due to new entrants into the workforce. From 1994 to 2000, the heart of the Clinton boom, growth in the U.S. economy averaged over 4% per year.

That is the meaning of depression. It is not negative growth, but it is below-trend growth. The past seven-years of 1% growth when the historical growth is 3% is a depression exactly as Keynes defined it.

Pundits point to 4% GDP growth in the second quarter of 2014 as proof that the economy is expanding robustly. Talk of a new depression seems confusing at best and disconcerting at worst. But second-quarter growth was driven by inventory accumulation, which adds nothing to GDP in the long-run. When inventories are converted to final sales, U.S. growth was only 0.65% in the first half of 2014. That is not a pace that will sustain an economic recovery.

Other observers point to declining unemployment and rising stock prices as evidence that we are not in a depression. They miss the fact that unemployment can fall and stocks can go up during a depression. The Great Depression lasted from 1929 to 1940. It consisted of two technical recessions from 1929–1932 and again from 1937–1938.

The periods 1933–1936 and 1939–1940 were technically economic expansions. Unemployment fell and stock prices rose. But the depression continued because the U.S. did not return to its potential growth rate until 1941. Stock and real estate prices did not fully recover their 1929 highs until 1954, a quarter century after the depression started.

Growth today isn’t strong because the problem in the economy is not monetary, it is structural.

The point is that GDP growth; rising stock prices and falling unemployment can all occur during depressions, as they do today. What makes it a depression is ongoing below trend growth that never gets back to its potential. That is exactly what the U.S. economy is experiencing. The New Depression is here.

Investors are also confused about depression dynamics because they are continually told the U.S. is in a “recovery.” Year after year forecasters at the Federal Reserve, the International Monetary Fund and on Wall Street crank out forecasts of robust growth. And year after year they are disappointed. The recovery never seems to get traction. First there are some signs of growth, then the economy quickly slips back into low-growth or no-growth mode.

The reason is simple. Typically, a recovery is driven by the Federal Reserve expanding credit and rising wages. When inflation gets too high or labor markets get too tight, the Fed raises rates. That results in tightening credit and increasing unemployment. This normal expansion-contraction dynamic has happened repeatedly since World War II. It’s usually engineered by the Federal Reserve in order to avoid inflation during expansions and alleviate unemployment during contractions.

The result is a predictable wave of expansion and contraction driven by monetary conditions. Investors and the Fed have been expecting another strong expansion since 2009, but it’s barely materialized.

Growth today isn’t strong because the problem in the economy is not monetary, it is structural. That’s the real difference between a recession and a depression. Recessions are cyclical and monetary in nature. Depressions are persistent and structural in nature. Structural problems cannot be solved with cyclical solutions. This is why the Fed has not ended the depression. The Fed has no power to make structural changes.

What do I mean by structural changes? Shifts in fiscal and regulatory policies. The list is long but would include things like lower taxes, repeal of Obamacare, approval of the Keystone Pipeline, expanded oil and gas production, fewer government regulations and an improved business climate in areas such as labor laws, litigation reform and the environment.

Power to make structural changes lies with the Congress and the White House. Those two branches of government are barely on speaking terms. Until structural changes are made by law, this new depression will continue and the Fed is powerless to change that.

P.S. Be sure to sign up for the Daily Reckoning — a free and entertaining look at the world of finance and politics from every possible angle. And while the articles you find here on our website represent our commitment to high quality commentary, they’re only a snippet of what you receive in the Daily Reckoning email edition. Click here now to sign up for FREE to see what you’re missing.