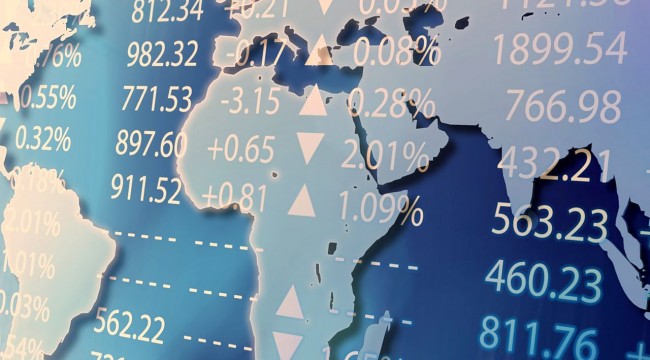 We Need a Crash to Sort the Wheat From the Chaff

Once the phantom collateral vanishes, there’s no foundation to support additional debt and leverage.

When a speculator bought a new particle-board-and-paint McMansion in the middle of nowhere in 2007 with nothing down and a $500,000 mortgage, the lender and the buyer both considered the house as $500,000 of collateral.

The lender counted the house as a $500,000 asset, and the speculator considered it his lottery ticket in the housing bubble sweepstakes: when (not if) the house leaped to $600,000, the speculator could sell, pay the commission and closing costs and skim the balance as low-risk profit.

That’s the trouble with assets bubbles inflated by central-bank/central-state intervention: when inefficient companies and inflated assets are never allowed to fall/fail, it’s impossible to tell the difference between real collateral and phantom collateral.

The implosion of the housing bubble led to an initial spike of price discovery. The speculator jingle-mailed the ownership of the poorly constructed McMansion to the lender, who ended up selling the home to another speculator who reckoned a 50% discount made the house cheap for $250,000.

But what was the enterprise value of the property, that is, how much revenue, cash flow and net income could the property generate in the open market as a rental? Comparables are worthless in terms of assessing collateral, because assets are mostly phantom collateral at bubble tops.

Leveraged 20-to-1, the lender’s loss of $250,000 in collateral/capital unhinged $5 million of the lender’s portfolio as the capital supporting those loans vanished.

The first speculator who put nothing down suffered a loss of creditworthiness, and the second speculator lost $100,000 plus commissions when he dumped the property for a loss.

Then when recession crushes demand (as it inevitably does), revenues, cash flow and net income all plummet, and the buyer can no longer cover operating costs and interest payments.

In a highly leveraged financial system such as ours, when the phantom collateral vanishes, so does the illusion of solvency. Losses are forced down somebody’s throat– either the lender or the owner, or both.

When that happens, the ability of lenders and speculators to leverage debt on collateral is impaired: once the phantom collateral vanishes, there’s no foundation to support additional debt and leverage.

And once the ability to pile on more debt and leverage goes away, the entire debt-dependent financial system does what this building in China did: collapse. 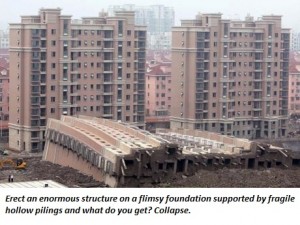 Erect an enormous structure on a flimsy foundation supported by fragile hollow pilings and what do you get? Collapse.

The only way to sort the wheat (real collateral based on enterprise value) from the chaff (phantom collateral created by central banks’ speculative bubbles) is for a crash to force price discovery and the cramdown of losses.