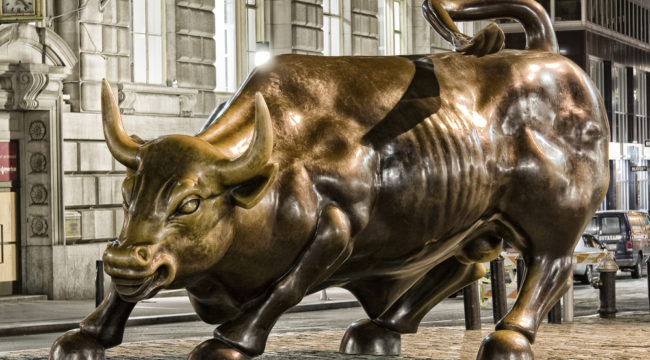 Wall Street's Calling the Sheep to the Slaughter — Again!

I believe the shock of Donald Trump’s election will soon be vastly exceeded by an even more shocking shutdown of Washington governance within days of the inauguration.

For the first time since the 1930s there will be a crash on Wall Street and a recession on main street, but the Imperial City will be powerless to remedy either.

That’s because financial history is not circular; it’s cumulative and all the fiscal and monetary artifices, expedients and frauds that can be deployed by the state to maintain the illusion of prosperity and soaring financial asset prices will have finally been exhausted.

With the Fed pitifully impaled on the zero bound for 96-months running, it has become evident to even the bubble vision cheerleaders that the massive monetary stimulus of the last two decades is over and done. The only thing left in the Fed’s arsenal is sub-zero interest rates, and that option does not have even a remote prospect of getting off the ground.

Donald Trump won the election against all odds, and that he did so on the back of a populist uprising that is unmitigated bad news for Wall Street. Brandishing whatever the present day equivalent of torches and pitchforks might be, the people will surely descend en masse on the Eccles Building if the Fed even hints at the possibility of imposing negative rates on savers and retirees.

Nor can the market be rescued through the backdoor of some kind of antiseptic QE that showers gamblers with unspeakable windfalls and stir the populist political pot to a full boil.

The obvious dead-end of monetary policy, in fact, is why there has been such frenzied rotation to the Trump reflation trade after the election.

The idea of a massive Trump stimulus was literally invented on the spot late on election night by Wall Street operators in order to attract gullible homegamers into the casino one last time.

But the smart money will soon be done selling and the unvarnished Washington disaster looming dead ahead will come screaming back into view. Even if Donald Trump had a semi-coherent economic program, which he clearly doesn’t, there is not a chance that he could get it through the Congress.

What passes for the nation’s highest legislative body will be riven with unprecedented partisan rancor and dysfunction from the moment it convenes in January. In part, that’s because the Democratic Party will be captured by the ultra-partisan left.

Shrill anti-Trump scolds like Senator Elizabeth Warren will make it their one and only mission to ensure that Trump fails and that what they consider to be the freak accident of November 8th is literally extinguished.

But high decibel partisanship isn’t the half of it. It is virtually certain that the GOP majorities in both Houses will become fractured and immobilized by the trauma of the impending fiscal bloodbath. The razor thin GOP majority in the Senate would have been stillborn under any circumstances owing to the 60-vote hurdle.

But in the House even the new 241-194 GOP majority will never withstand the blunt force trauma of Trump’s wildly irresponsible fiscal program slamming smack dab into the jaws of $1 trillion annual deficits.

We’re seeing the return of the bond vigilantes — a metaphor for a condition of rapidly rising deficits and simultaneously rising interest rates. However, the bond vigilantes have been absent from the scene for so long that historical memory of the resulting political blowback has undoubtedly been lost in the Imperial City and the mainstream media which celebrates its follies.

Yet know this: Washington’s fiscal bloodbath is coming to the cable news coverage-athons soon. The commentariat will be shocked and flummoxed by its arrival, having embraced the all-is-awesome recovery myth so completely that it is unaware of the stunning fact that the public debt rose by $1.7 trillion during the last two years alone.

That is, Uncle Sam issued monumental amounts of new debt during months #63-87 of a recovery that has already outlasted the typical 61-month post-war expansion; and did so during the late stage phase of the cycle where even traditional Keynesians said deficits should be eliminated or minimized in order to preserve dry powder for the next downturn.

Stated differently, for all practical purposes fiscal policy has replicated the folly emanating from the Eccles Building by remaining in emergency mode right through the entire business cycle recovery, rendering it paralyzed in the teeth of the next recession.

But the fact of that folly has remained obscured by Washington’s resort to budgetary accounting shenanigans that pale into insignificance the infamous frauds of Enron, WorldCom, Tyco, AIG, Valeant and Bernie Madoff combined.

For instance, last year Uncle Sam financed $96 billion of new student loans, but only $15 billion of that was charged to the deficit. That’s because in its wisdom Washington determined that student loans are an “investment” and only a small “provision” need be taken for potential future losses.

Right. The Democratic Party has adopted Bernie’s “free stuff” when it comes to college tuition and even Donald Trump has proposed a vast forgiveness scheme that would cap student loan repayments at 12% of income for a limited number of years, and cancel the rest. So piling $100 billion per year of additional student debt on top of the $1.3 trillion outstanding is deficit spending by any other name.

And Congress ordered the Fed to transfer $19.3 billion of purely fictional accounting reserves to the highway trust fund in order to keep it “solvent” until next year.

Yet that deception was on top of the underlying fraud. That is, the transfer of the Fed’s annual “profit” after expenses to the U.S. Treasury. That amounted to $97 billion last year, and it was neither real nor sustainable.

To the contrary, the transfer was just make-believe accounting “profits” that result from the $119 billion of interest the Fed earns on its massively bloated $4.5 trillion balance sheet.

Stated differently, the nation’s central bank bought its massive trove of treasury debt and other paper with credits conjured from thin air and therefore has no material funding cost for its “liabilities.”

Yet it is pleased to call this exercise in monetary magic an accounting profit and return it to the Capitol Hill politicians to offset the reported net interest expense on Uncle Sam’s massive $19.6 trillion debt.

Here’s the thing. Now that the bond vigilantes have been resurrected by the Trumpflation story, even this fictional accounting profit is about to disappear. That’s because the Fed will now experience massive mark-to-market losses on its $4.5 trillion bond portfolio as interest rates normalize one way or another.

Yet under its accounting rules, and appropriately so, it must charge the bond losses against it so-called operating profit. This means the Fed’s profit repatriation to the U.S. Treasury is about to shrink drastically.

The jig will soon be up. Federal receipts during the last six months are down by nearly 2% because the current aging business cycle expansion is grinding to a halt.

So based on spending and entitlements which are already built into the existing budget baseline, and given the prospect of stagnant revenues at best, I believe the first full budget (for 2018 ) that the Trump Administration will have to grapple with will show an inherited deficit of about $850 billion and a new borrowing requirement of nearly $1 trillion.

And that’s before it spends one dime on infrastructure or tax cuts!

And it’s also before another near certainty. Namely, when the stock market crashes in response to a breakdown of governance in the Imperial City and the disappearance of the massive stimulus story, the U.S. economy will slide into full-fledged recession. Then the deficit will be back into the trillion dollar plus category in a heartbeat.

As I said, there is a fiscal bloodbath coming soon.