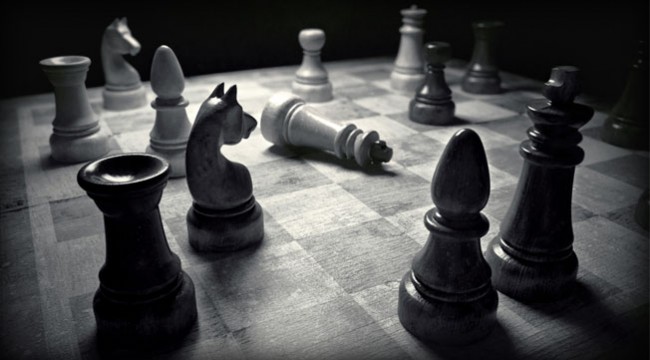 Waiting For The Zugzwang

“There’s a term in chess called zugzwang,” writes Michael Sivy at Time, “which describes the point in a game when it’s your turn to move but every move you could make would worsen your situation. That’s pretty much what the chessboard looked like for Ben Bernanke this morning.”’

We have ourselves kvetched that the nitpicking of Bernanke’s testimony to Congress is but a “pointless commotion” and yet, we confess, we couldn’t help but watch.

The anticipation was palpable. The Dow, already up 40 points before Bernanke uttered a word. Then, the lights dimmed, silence fell and the curtain lifted…

“A premature tightening of monetary policy could lead interest rates to rise temporarily” Mr. Bernanke pontificated, “but would also carry a substantial risk of slowing or ending the economic recovery and causing inflation to fall further… High rates of unemployment and underemployment are extraordinarily costly…”

It was like watching a foreign film…we couldn’t quite understand him, so we made sure the subtitles were on.

The dollar jumped… the Dow climbed another 100 points… and gold curled up alone in the corner. Whimpering.

“If we see continued improvement” Bernanke mumbled on, “and we have confidence that that’s going to be sustained, then we could, in the next few meetings, we could take a step down in our pace of purchases.”

Bernanke: But we could tighten, too.

That was all it took. The Dow dropped back to where it started. Gold dropped down to $1,357.

There were enough “ifs,” “coulds” and commas in his statement to make even our own corporate attorney’s heads spin, thereby fulfilling its mandate.

“The lender of last resort should remain ambiguous,” we paraphrase professor Kindleberger’s description of the Fed’s role in supporting an otherwise fragile economy.

The only safe assumption is this: Given a choice, Bernanke will likely strangle the currency (your money)… in favor of “strengthening” the economy, the employment rate… the relative calm of the political environment (IRS be damned)…. and the banking system.

Still, while not yet at the nosebleed heights of those years, the banking sector is starting to resemble the runup to the banking crisis of 2008.

“Securitization,” reports CNBC this morning, the demon from which mortgage backed securities were spawned prior to 2008, “has hit volume of $225 billion,” logging 365 deals in 2013. That’s already a third of the pre-crisis record.

“Shadow banking”, another indication of risk tolerance, has risen above traditional banking levels for the year. Loans among firms willing to do business “outside the normal channels” have surpassed $16 trillion — more than the $15 trillion in total assets in traditional deposit banks… and “more than double the $6 trillion in corporate bonds” (figures, again, from CNBC).

Corporate debt has, well, returned to the upward pre-crisis trend as well. 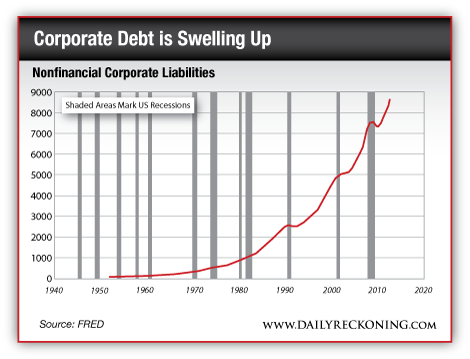 And so it goes in the crackup boom.