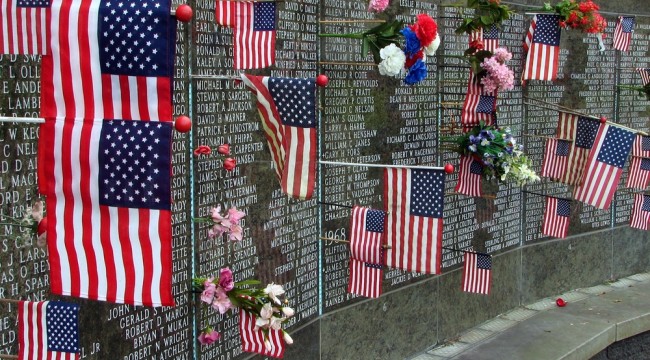 Vietnam War at 50: Have We Learned Nothing?

Last week Defense Secretary Ashton Carter laid a wreath at the Vietnam Veterans Memorial in Washington in commemoration of the “50th anniversary” of that war. The date is confusing, as the war started earlier and ended far later than 1966. But the Vietnam War at 50 commemoration presents a good opportunity to reflect on the war and whether we have learned anything from it.

Some 60,000 Americans were killed fighting in that war more than 8,000 miles away. More than a million Vietnamese military and civilians also lost their lives. The US government did not accept that it had pursued a bad policy in Vietnam until the bitter end. But in the end the war was lost and we went home, leaving the destruction of the war behind. For the many who survived on both sides, the war would continue to haunt them.

It was thought at the time that we had learned something from this lost war. The War Powers Resolution was passed in 1973 to prevent future Vietnams by limiting the president’s ability to take the country to war without the Constitutionally-mandated Congressional declaration of war. But the law failed in its purpose and was actually used by the war party in Washington to make it easier to go to war without Congress.

Such legislative tricks are doomed to failure when the people still refuse to demand that elected officials follow the Constitution.

When President George HW Bush invaded Iraq in 1991, the warhawks celebrated what they considered the end of that post-Vietnam period where Americans were hesitant about being the policeman of the world. President Bush said famously at the time, “By God, we’ve kicked the Vietnam Syndrome once and for all.”

They may have beat the Vietnam Syndrome, but they learned nothing from Vietnam.

Colonel Harry Summers  returned to Vietnam in 1974 and told his Vietnamese counterpart Colonel Tsu, “You know, you never beat us on the battlefield.” The Vietnamese officer responded, “That may be so, but it is also irrelevant.”

He is absolutely correct: tactical victories mean nothing when pursuing a strategic mistake.

Last month was another anniversary. March 20, 2003 was the beginning of the second US war on Iraq. It was the night of “shock and awe” as bombs rained down on Iraqis. Like Vietnam, it was a war brought on by government lies and propaganda, amplified by a compliant media that repeated the lies without hesitation.

Like Vietnam, the 2003 Iraq war was a disaster. More than 5,000 Americans were killed in the war and as many as a million or more Iraqis lost their lives. There is nothing to show for the war but destruction, trillions of dollars down the drain, and the emergence of al-Qaeda and ISIS.

Sadly, unlike after the Vietnam fiasco there has been almost no backlash against the US empire. In fact, President Obama has continued the same failed policy and Congress doesn’t even attempt to reign him in. On the very anniversary of that disastrous 2003 invasion, President Obama announced that he was sending US Marines back into Iraq! And not a word from Congress.

There have been too many war anniversaries! We want an end to all these pointless wars. It’s time we learn from these horrible mistakes.