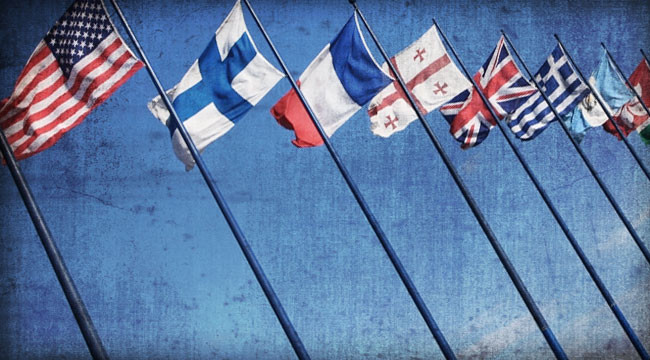 The Coming War Between the U.S. and (Insert Country Here)

War between the US and China — an unpleasant thought, for sure…unless you happen to be a defense contractor. The threat of war could be sufficient to power the defense industry’s profit growth for many years.

We would not be tackling this grim topic — nor engaging in the financial market version of grave-dancing — if the suits and uniforms in Washington understood that China is merely implementing its own version of the Monroe Doctrine.

China’s Monroe Doctrine aims to keep the United States from getting closer than it is already.

If you don’t remember the Monroe Doctrine from history class, it goes like this: President James Monroe in 1823 put the European powers on notice that if they meddled anywhere in Latin America, the United States would step in to put a stop to it. It was a big “keep out of our backyard” sign.

OK, it was more subtle than that; an aging Thomas Jefferson congratulated Monroe on achieving a “cordial friendship with England.” The doctrine was, indeed, a tacit agreement between the United States and Great Britain. The US took a free ride on the Royal Navy. Its ships patrolled the waters surrounding Latin America, keeping the continental powers far from America’s doorstep.

“The Pacific basin has long been home to the United States’ largest trading partners, and Washington deploys more than 320,000 military personnel in the region, including 60% of its navy,” writes Conn Hallinan of the think tank Foreign Policy in Focus. “The American flag flies over bases in Japan, the Philippines, South Korea, Malaysia, Thailand, the Marshall Islands, Guam and Wake.” The US Seventh Fleet routinely sails near the Chinese coast, to the edge of the “12-mile limit” where international waters end. 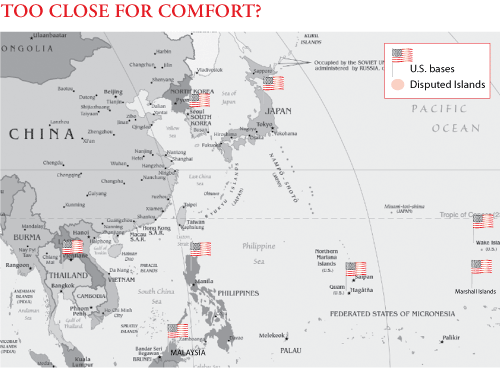 No wonder Chinese leaders sense — rightly or wrongly — that they’re being encircled.

“China has made it clear that it will not tolerate the threat to its security represented by a foreign military presence at its gates when these foreign forces are engaged in activities designed to probe Chinese defenses and choreograph a way to penetrate them,” writes our acquaintance Chas Freeman, the veteran US diplomat who was President Nixon’s interpreter on his groundbreaking visit to “Red” China in 1972.

“There’s no reason to assume that China is any less serious about this than we would be if faced with similarly provocative naval and air operations along our frontiers.”

Thus are the Chinese asserting their dominion over the disputed Senkakus Islands. “China sees the islands as part of its defensive parameter,” Hallinan explains, “an understandable point of view considering the country’s history. China has been the victim of invasion and exploitation by colonial powers, including Japan, dating back to the first Opium War in 1839.”

China also insists it rightly controls a host of islands in the South China Sea — rich fishing grounds and a potential source of oil and gas. These islands, such as the Spratlys and Paracels, are also claimed by… oh, let’s run down the list: Vietnam, Malaysia, Taiwan, Brunei and the Philippines. Maybe the Kardashians too, for all we know.

In addition, China has…

A sensible US response would go something like this: “Hey, China’s implementing its own Monroe Doctrine. They want to be in charge in their own backyard. Meanwhile, we’re $16.4 trillion in debt. Heck, we owe $1.1 trillion of that to China. Why are we going deeper in debt to keep 60% of the Navy stationed in the Pacific basin? Maybe we should reconsider this whole ‘American lake’ thing.”

“…America’s strategic move east is aimed in practical terms at pinning down and containing China and counterbalancing China’s development.”

Instead, the US government is doubling down.

“As the war in Iraq winds down and America begins to withdraw its forces from Afghanistan, the United States stands at a pivot point,” then Secretary of State Hillary Clinton wrote in Foreign Policy’s November 2011 issue. “One of the most important tasks of American statecraft over the next decade will therefore be to lock in a substantially increased investment — diplomatic, economic, strategic and otherwise — in the Asia-Pacific region.”

In DC wonk circles, this statement of intentions has come to be known as “the pivot.”

The same month Clinton published that article — with the presumptuous title “America’s Pacific Century” — the Obama administration stationed 2,500 US troops on Australia’s northern coast for the first time. More encirclement.

“The U.S. sees a growing threat to its hegemony from China,” said a commentary from the official Xinhua News Agency. “Therefore, America’s strategic move east is aimed in practical terms at pinning down and containing China and counterbalancing China’s development.”

In Empire of Debt, we postulated the empire has a logic all its own. That logic will bring about events beyond your control. It is far better to understand those events and plan your life and your portfolio accordingly… than to allow them to blindside you and your family.

ITA is up over 46% from the time we urged subscribers of Addison Wiggin’s Apogee Advisory to buy it in November 2011. Still now, the industry is positively salivating over the pivot.

In crass terms, we call our strategy “making the empire pay.” Or, if it suits you better, simply think of it as channeling some of your tax dollars back into your own pocket. If you have a problem with investing alongside the military industrial complex, have no fear. We wrote about the ethics of such investing in these pages last Tuesday.

“Name almost any investment,” we wrote, “and we can come up with a valid objection to it… and not on hippy-dippy ‘save the Earth’ or ‘fair trade’ grounds, either.”

“The military industrial complex kills people.” protests one reader, “If you can live with being an owner of a company that profits from state sponsored killing … that depends on government sanctioned and directed killing, that’s fine. I can’t. Your argument is just a way to rationalize bad behavior.”

Fair enough. Everyone will have to draw their own line on this one.

P.S. It’s our job to simply present you with the opportunities. In today’s Daily Reckoning email edition we gave readers a specific investment opportunity with even greater potential than our ITA recommendation. We simply put it out there and let them decide what profits they were comfortable taking. If you’re not signed up for The Daily Reckoning email edition you missed out… simply click here to sign up for free, and never miss another opportunity like this one.