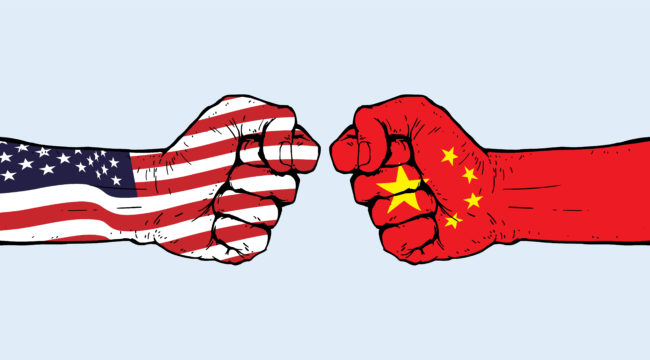 Is the United States trying to eliminate China as an economic threat?

And is Trump recruiting a critical ally in support thereof?

Today we peer behind the sturm und drang of daily events… and pursue the deep currents of strategy beneath the roiling surface.

It was released to the blast of trumpets… and great fanfare.

The report details China’s ambitions to lead in such fields as robotics, aerospace, clean energy and advanced materials.

By 2025, for example, China intends to seize 70% of market share for “basic core components and important basic materials” in strategic industries.

China’s being a truly global superpower by 2050.

Since June, the Chinese government appears to have suppressed all mention of Made in China 2025.

But not once since June 5.

One Western diplomat — who refused to be identified — told Reuters:

“China is apparently starting to adjust to the blowback caused by the heavy propaganda… They won’t stop doing it, [but] the way they talk about it is changing.”

But official Washington is on alert…

This June, Trump’s senior trade adviser Peter Navarro said of Made in China 2025:

The Chinese are now suppressing it from being referenced in public because they don’t want people to know the intent of the plan, which is to capture 70% of global production in the emerging industries of the future within the next seven years… These are the future of the world and of America, and China cannot have 70% of production of these industries by 2025.

Navarro has authored a book yielding some insight into his perspective on China:

“If we lose the industries of the future,” warned Trump, “we won’t have a future.”

Can the United States derail — or at least delay — China’s superpower ambitions?

“Engineering a decade of rolling Chinese financial crises would be the most effective foreign policy the U.S. could run.”

“The best way to bring Beijing to its knees is by running a tight monetary policy in the U.S.,” continued Mr. Peters.

We can’t help note the U.S. is presently running a tight monetary policy — or tighter, at least.

The Federal Reserve is in midcourse of a rate hike cycle that could endure through 2020.

It has also taken to reducing its balance sheet — a form of tightening.

A stronger dollar attracts investors away from weaker currencies, such as the Chinese yuan.

If capital flees China en masse, the pillars supporting its economy could begin to crack.

China has the world’s most overleveraged, fragile financial system. In 2008, China’s total debt-to-GDP was 140%. It is now roughly 300%, while GDP is slowing. The economy is held together by capital controls. If those fail, the whole system fails…

And we’re 80% of the way there — we instigated a trade war, implemented a massive fiscal stimulus, which created the room to raise interest rates. The combined policy mix makes capital want to leave at the same time it makes the dollar more attractive and effectively shuts down new investment inflows to China.

Here Peters refers to capital controls. China is desperate to keep capital from exiting the country.

These efforts will fail ultimately, as Jim Rickards explains here and here.

But Peters then introduces a joker card to the drama, a third independent actor — Russia.

The Western world’s wrath is directed uniquely and powerfully toward Russia.

All the while, China is at its own tricks — pushing around its neighbors in the South China Sea, for example.

It is almost as if China has been creating a Russian smokescreen to distract from its own chicanery, says Peters:

Russia at its very worst is a moderate threat to the U.S.… China is the real strategic threat… It’s so telling that everyone is in hysterics over Russia. It’s a distraction that makes you wonder if the Chinese aren’t enabling or pushing the narrative.

Has the U.S. focus on Russian skullduggery been a strategic blunder?

And is Trump trying to correct it by enlisting Russian support against China?