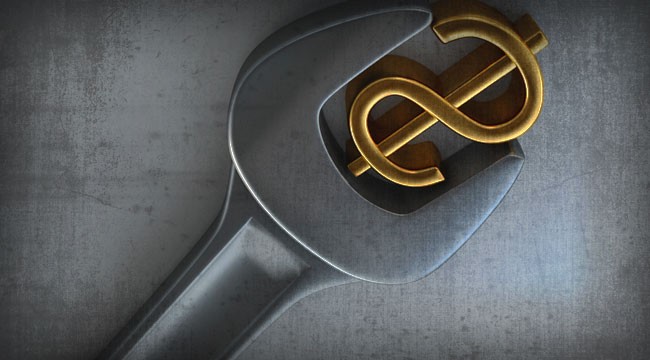 Why the U.S. is Letting China Accumulate Gold

The reason is that a country’s reserves are a mixture of gold and hard currencies, and the currencies can be in bonds or other assets. The United States doesn’t need other currencies. We print dollars, so why would we hold euros and yen?

The U.S. doesn’t need them, so it makes sense that the country would have a very large percentage of its reserves in gold. China, on the other hand, has greater need for other currencies.

A better metric, in my opinion, is to look at a country’s gold holdings as a percentage of GDP. GDP is a representation of how big a country’s economy is. It’s the gross value of all the goods and services.

There are different measures of money supply — M3, M2, M1, and M0. In a money economy, however, you can say that the country’s gold holdings are the real money. I call a country’s gold reserves gold “M-subzero”.

The IMF officially demonetized gold in 1975. The U.S. ended the convertibility of gold in 1971. Gold disappeared “officially” in stages in the mid-1970s. But the physical gold never went away.

Today, the US has about 8,000 tons. We haven’t sold a significant amount of gold since 1980. We dumped a lot of gold in the late 1970s to suppress the price, but none after that. So one of my questions for central bankers is, if gold is such a ridiculous thing to have, why are we hanging onto it? But that’s a separate question.

For example, Russia has one-eighth the gold of the United States. It sounds like they’re a small gold power — but their economy’s only one-eighth as big. So, they have about the right amount of gold for the size of their economy.

In China, that number is 0.7 percent officially. Unofficially, if you give them credit for having, let’s say, 4,000 tons, it raises them up to the US and Russian level, but they want to actually get higher than that because their economy is growing.

Here’s the problem: If you took the lid off of gold, ended the price manipulation and let gold find its level, China would be left in the dust. It wouldn’t have enough gold relative to the other countries, and because their economy’s growing faster and because the price of gold would be skyrocketing, they could never acquire it fast enough. They could never catch up. All the other countries would be on the bus while the Chinese would be off.

There is statistical, anecdotal and forensic evidence piling up for this. All of it is very clear. I’ve also spoken to members of Congress, the intelligence community, the defense community and very senior people at the IMF about it.

China is our largest trading partner.  It’s the second largest economy in the world.  The US would like to maintain the dollar standard.

I’ve described some catastrophic scenarios where the world switches to SDRs or goes to a gold scenario, but at least for the time being, the US would like to maintain a dollar standard. Meanwhile, China feels extremely vulnerable to the dollar.  If we devalue the dollar, that’s an enormous loss to them.

That’s why, behind the scenes, the U.S. needs to keep China happy.  One way to do that is to let China get the gold.  That way, China feels comfortable.

Gold is liquid, but it’s a fairly thin market.  If I call JP Morgan and say, “Hey, I want to buy 500 tons of gold,” I can’t do it.  That would be a huge order.  An order like that has to be worked between countries and central banks behind the scenes.

It’s done at the BIS, the Bank for International Settlements, in Basel, Switzerland.  They’re the acknowledged intermediary for gold transactions among major central banks and private commercial banks.

That’s not speculation.  It’s in the footnotes of the annual BIS report. I understand it’s geeky, but it’s there.  They have to acknowledge that because they actually get audited.  Unlike the Fed and unlike Fort Knox, the BIS gets audited, and they have to disclose those kinds of things.

The evidence is there. China is saying, in effect,  “We’re not comfortable holding all these dollars unless we can have gold.  But if we are transparent about the gold acquisition, the price will go up too quickly.  So we need the western powers to keep the lid on the price and help us get the gold, until we reach a hedged position.  At that point, maybe we’ll still have a stable dollar.”

P.S. While many are waiting for the next economic crisis down the road, the real economic problems are already here. Financial flaws have been crafted into the system. If you know what you’re looking for, you can see this collapse coming a mile away.  This shock is so concerning that Jim Rickards is sending out his roadmap to any American wanting to learn how to best use gold (the #1 asset in a currency crisis) so that you can not only prepare and survive – but THRIVE – in a coming dollar collapse. Click here to claim your FREE copy.