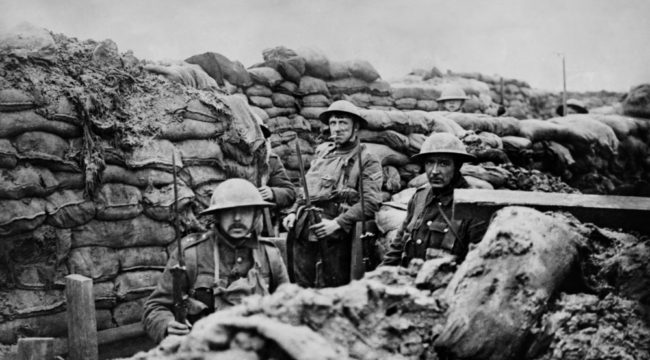 U.S. Entry Into World War I Was a Disaster

103 years ago, in 1914, the Federal Reserve opened-up for business as the carnage in northern France was getting under way.

And it brought to a close the prior magnificent half-century era of liberal internationalism and honest gold-backed money.

The Great War was nothing short of a calamity, especially for the 20 million combatants and civilians who perished for no reason discernible in any fair reading of history, or even unfair one.

Yet the far greater calamity is that Europe’s senseless fratricide of 1914-1918 gave birth to all the great evils of the 20th century — the Great Depression, totalitarian genocides, Keynesian economics, permanent warfare states, rampaging central banks and the follies of America’s global imperialism.

The Great War undid it all.

In the case of Great Britain, for example, its national debt increased 14-fold, its price level doubled, its capital stock was depleted, most off-shore investments were liquidated and universal wartime conscription left it with a massive overhang of human and financial liabilities.

Yet England was the least devastated. In France, the price level inflated by 300% its extensive Russian investments were confiscated by the Bolsheviks and its debts in New York and London catapulted to more than 100% of GDP.

Among the defeated powers, currencies emerged nearly worthless with the German mark at five cents on the pre-war dollar, while wartime debts — especially after the harsh peace of Versailles — soared to crushing, unrepayable heights.

In the first place, America’s wholly unwarranted intervention in April 1917 prolonged the slaughter, doubled the financial due bill and generated a cockamamie peace, giving rise to totalitarianism among the defeated powers and Keynesianism among the victors.

Even conventional historians admit as much. Had Woodrow Wilson not misled America on a messianic crusade, the Great War would have ended in mutual exhaustion in 1917 and both sides would have gone home battered and bankrupt but no danger to the rest of mankind.

Indeed, absent Wilson’s crusade there would have been no allied victory, no punitive peace, and no war reparations; nor would there have been a Leninist coup in Petrograd or Stalin’s barbaric regime.

Likewise, there would have been no Hitler, no Nazis, no holocaust, no global war against Germany and Japan and no incineration of 200,000 civilians at Hiroshima and Nagasaki.

Nor would there have followed a Cold War with the Soviets or CIA sponsored coups and assassinations in Iran, Guatemala, Indonesia, Brazil and Chile to name a few. Surely there would have been no CIA plot to assassinate Castro, or Russian missiles in Cuba or a crisis that took the world to the brink of annihilation.

Nor would we have had to come to the aid of the mujahedeen and train the future al Qaeda in Afghanistan. Likewise, there would have been no Khomeini-led Islamic counter-revolution, and no U.S. aid to enable Saddam’s gas attacks on Iranian boy soldiers in the 1980s.

Nor would there have been an American invasion of Arabia in 1991 to stop our former ally Saddam Hussein from looting the equally contemptible Emir of Kuwait’s ill-gotten oil plunder — or, alas, the horrific 9/11 blowback a decade later.

Nor would we have been stuck with a $1 trillion Warfare State budget today. But I digress.

Economically, the Great War enabled the already rising American economy to boom and bloat in an entirely artificial and unsustainable manner for the better part of 15 years.

The realities of war finance also transformed the new Federal Reserve into an incipient central banking monster in a manner wholly opposite to the intentions of its great legislative architect — the incomparable Carter Glass of Virginia.

During the Great War America became the granary and arsenal to the European Allies — triggering an eruption of domestic investment and production that transformed the nation into a massive global creditor and powerhouse exporter virtually overnight.

Needless to say, these fantastic figures reflected an inflationary, war-swollen economy — a phenomena that prudent finance men of the age knew was wholly artificial and destined for a thumping post-war depression.

World War I simply gave birth to the modern Fed as we know it.

When Congress created the Federal Reserve on Christmas Eve 1913, just six months before Archduke Ferdinand’s assassination, it had provided no legal authority whatsoever for the Fed to buy government bonds or undertake so-called “open market operations” to finance the public debt.

In part this was due to the fact that there were precious few Federal bonds to buy. The public debt then stood at just $1.5 billion, which is the same figure that had pertained 51 years earlier at the battle of Gettysburg, and amounted to just 4% of GDP.

Thus, in an age of balanced budgets and bipartisan fiscal rectitude, the Fed’s legislative architects had not even considered the possibility of central bank monetization of the public debt, and, in any event, had a totally different mission in mind.

The big point here is that Carter Glass’ “banker’s bank” was an instrument of the market, not an agency of state policy. The so-called economic aggregates of the later Keynesian models — GDP, employment, consumption and investment — were to remain an unmanaged outcome on the free market, reflecting the interaction of millions of producers, consumers, savers, investors, entrepreneurs and even speculators.

But WWI crossed the Rubicon of modern Warfare State finance. During World War I the U.S. public debt rose from $1.5 billion to $27 billion — an eruption that would have been virtually impossible without wartime amendments which allowed the Fed to own or finance U.S. Treasury debt.

These “emergency” amendments — it’s always an emergency in wartime — enabled a fiscal scheme that was ingenious, but turned the Fed’s modus operandi upside down and paved the way for today’s monetary central planning.

Washington learned that it could unplug the free market interest rate in favor of state administered prices for money, and that credit could be massively expanded without the inconvenience of higher savings out of deferred consumption.

It was this wartime transformation of the Fed into an activist central bank that postponed the normal post-war liquidation — moving the world’s scheduled depression down the road to the 1930s.

The Fed’s role in this startling feat is in plain sight in the history books, but its significance has been obfuscated by Keynesians presuming that the state must continuously manage the business cycle and macro-economy.

The Great Depression thus did not represent the failure of capitalism or some inherent suicidal tendency of the free market to plunge into cyclical depression — absent the constant ministrations of the state through monetary, fiscal, tax and regulatory interventions.

Instead, the Great Depression was a unique historical occurrence — the delayed consequence of the monumental folly of the Great War, abetted by the financial deformations spawned by modern central banking.

The “failure of capitalism” explanation of the Great Depression is exactly what enabled the Warfare State to thrive and dominate the rest of the 20th century because it gave birth to what have become its twin handmaidens — Keynesian economics and monetary central planning.

Together, these two doctrines eroded and eventually destroyed the great policy barrier — that is, the old-time religion of balanced budgets — that had kept America a relatively peaceful Republic until 1914.

If only we could rewind the clock to 1917 and keep Wilson out of WWI, history — and economics — likely would have been a lot different.