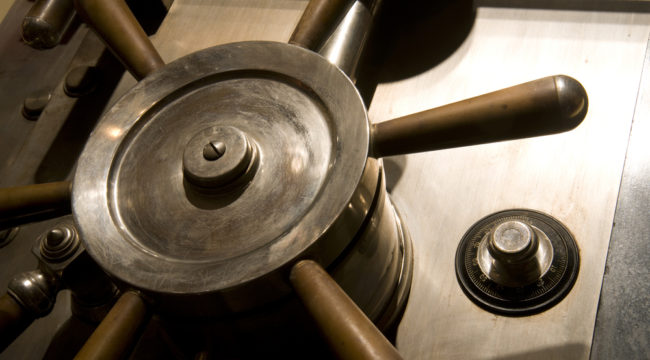 The Truth About the Fort Knox Gold

One of the little-known items on the Fed’s balance sheet is a vital asset it received from the U.S. Treasury a long time ago…

During the Great Depression, in 1933, President Roosevelt issued an executive order requiring anyone with gold to surrender it to a Federal Reserve bank or any member bank of the Federal Reserve system.

But under the Gold Reserve Act of 1934, the Fed was ordered to surrender all its gold to the Treasury Department. All the nation’s gold in effect came under direct government ownership.

Now, this is key: The Federal Reserve is actually a private system, while the Treasury is an arm of the U.S. government. And the Fifth Amendment of the Constitution prevents the government from taking private property without just compensation.

To get around that legality, the “just compensation” was a gold certificate the Treasury issued to the Fed in exchange for its physical gold.

To this day, the Fed carries that gold certificate on its balance sheet.

The Treasury officially values its gold at $42 an ounce. That was the official gold price from 1973, two years after the U.S. abandoned the Bretton Woods system. Of course, the market price of gold today is almost $1,300 an ounce.

But if you take the face value of the gold on the Fed balance sheet, divide it by $42 an ounce and then come up with a number of ounces and convert that into tons, it comes out to over 8,000 tons.

That’s highly interesting, because that’s how much gold the Treasury currently owns.

The Treasury needs at least 8,000 tons of gold to back up that paper certificate it handed the Fed back in the 1930s to satisfy the Fifth Amendment.

So the secret to the Fed’s balance sheet is its “hidden gold asset,” that gold certificate it received from the Treasury in the 1930s.

Nobody talks about this or admits it. But our whole system is based on gold.

But what about the gold in Fort Knox? Is it actually there?

There is a lot of confusion on this subject.

First off, Fort Knox was built in 1937 partly to house gold that the Treasury was scooping up after the Gold Reserve Act took effect. The gold had been kept it in vaults in the basement of the Treasury. But they ran out of space, so they built Fort Knox to house the gold.

Many gold bugs and conspiracy theorists say there is no actual gold in Fort Knox. They say the reason the government will not audit the gold, for example, is because the gold is not there.

But the truth is quite the opposite.

If you are the Fed or the Treasury and you want people to think that gold is unimportant — which they do — why would you audit it?

I am in favor of an audit, just to be clear. But the fact that the government does not audit the gold does not tell you that the gold is not there. They just do not want you to pay any attention to it.

But is the gold actually in Fort Knox?

Incidentally, most people think all the Treasury gold is in Fort Knox. But that is not correct. A little more than half the gold is at Fort Knox, but the rest is stored at West Point on the Hudson River in New York.

People will occasionally ask me who controls the gold. Is it the Fed or the Treasury?

The real answer is neither. The U.S. Army actually controls the gold because both Fort Knox and West Point are Army bases. The Army has it under lock and key. But it technically belongs to the Treasury.

Now, some people like billionaire precious metals trader Eric Sprott argue that the gold could very well be at Fort Knox, but it’s been leased out to commercial banks. And yes, it could very well be leased. But leasing is a paper transaction. It doesn’t mean the government surrenders possession of the gold.

If JPMorgan, for example, leases gold from the U.S. Treasury, it does not mean that they back up a truck in Fort Knox and drive the gold away. There is no need for that. It is just a paper transaction. The gold could be sitting there on a shelf in Fort Knox and still be leased out and unaudited.

Now, once JPMorgan has the gold they will sell it at times 100 to gold investors who think they have bought actual gold. But what they really have is what is called unallocated gold. Unallocated gold is a euphemism for no gold.

That means they do not claim to have any specific bar with a serial number or your name on it. In reality they have taken the same bar of gold and sold it to 100 different investors.

Now, that’s not a problem unless all 100 parties show up at once and ask for their gold. The first person may get the gold, but the other 99 people are going get their contracts terminated. They will receive a check for the value of gold at the close of business the previous day. But they are not going to get the gold they thought they were buying.

That is when you discover that JPMorgan does not have the gold.

A lot of it could very well be leased out, and that leads to confusion about whether or not the government actually has the gold. But all the evidence tells me that the gold is in Fort Knox and at West Point.

And if you were the United States of America, why would you let the gold out of your sight?