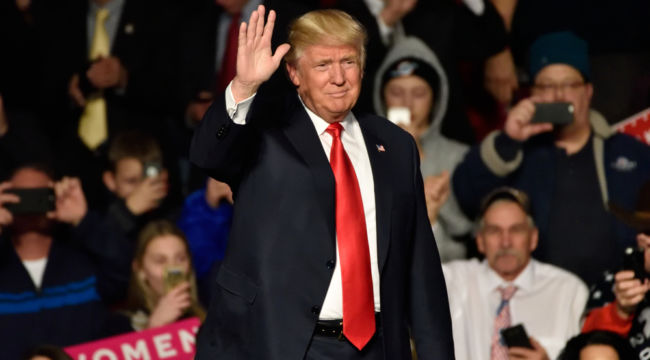 The president appeared before the American people last evening… and assessed the state of the American Union.

In his telling the union is in a swell and exalted state, marvelous beyond compare.

And he is eager to accept credit…

A grand fellow, by all the gods, the president has fanned a mighty cyclone of American prosperity.

And Mr. Trump let us know that America’s record stock market is the world’s envy.

We can only look on in awe, eyes apop and jaw adrop. As we have written before…

We confess a sincere admiration for any man so certain of his stars, so certain of whom the angels are for… and whom they are against.

No modesty hangs about him. No self-doubt gnaws at him. No scruple enchains him.

In Trump we have the popinjay pure and perfect, the supreme chest-thumper, the peacock of peacocks.

The fellow is simply… sui generis.

We concede he may be no deeper than the skin that encases him. But intellectual depth is vastly overrated in a president.

Overrated? It is often a menace…

It is the “deep thinkers” who think the republic into its deepest fixes.

The “Sage of Baltimore,” H.L. Mencken, certainly hooked onto something when he wrote:

“We suffer most when the White House bursts with ideas.”

Woodrow Wilson — for example — was the only doctor of philosophy to ever seize the White House.

And the nation is still afflicted with his lovely ideas…

Who signed the Federal Reserve Act into law?

The answer is Mr. Wilson.

Who signed the federal income tax into law?

The answer is Mr. Wilson.

The same Mr. Wilson ordered the doughboys “over there.” 116,000 of them will remain forever over there.

And the Versailles Treaty that closed the “war to end all wars” spawned the “peace to end all peace.”

WWI was “the Great War” until an even greater war imposed a Roman numeration upon it.

In contrast to the intellectual president, we find Wilson’s successor once removed — Calvin Coolidge.

Slept more than any other president, whether by day or by night… There were no thrills while he reigned, but neither were there any headaches. He had no ideas, and he was not a nuisance.

Take due note of the phrasing — it was not “He had no ideas, but he was not a nuisance.” It was rather:

“He had no ideas, and he was not a nuisance.”

Loftier praise for any president is scarcely imaginable: He had no ideas and he was not a nuisance.

Being a nuisance, alas, is how presidents nudge their way onto the history pages.

Whom do historians slobber and swoon over — a Calvin Coolidge or a Franklin Roosevelt?

A Grover Cleveland — or a Theodore Roosevelt?

Both Roosevelts were colossal nuisances.

Our central criticism of Trump is not that he is a nuisance… but that he has not been nuisance enough.

Trump was elected, in fact, to be a nuisance.

Not a statesman, that is — but a demolition man.

He would end the forever wars… and disentangle the United States from entangling alliances.

And did he not pledge to retire the debt?

Yet the United States remains entangled as ever… and more indebted than ever.

The swamp, meantime, remains as deep, as thick, as gaseous as ever.

But it is not our purpose to bring the president into contempt or ridicule. We have no heat against the fellow whatsoever.

And his campaign rallies are the highest comedy. Nothing comes within 100 miles of it.

Besides, we never believed that Mr. Trump stood the slightest chance of emptying the swamp.

Nearly the entire governmental apparatus is against him — including much of his party.

He is simply a man out of his depth.

But a George Washington would be out of his depth today.

Even “Old Hickory” Andy Jackson would be under the presidential desk the first day on the job, sinking a bottle of Tennessee’s hardest whiskey and sobbing for his mother.

No, the national rot is too deeply advanced for any one man to turn back.

The termites have eaten too deeply into the floorboards beneath… and the rafters above.

And they are after whatever solid timber that remains…