“The Trump administration has clearly signaled that the day of the strong dollar is over,” says Jim Rickards.

“The dollar tumbled on Tuesday,” says the Reuters newswire, “headed for its worst start to a year in three decades.” We noted yesterday how Team Trump was jawboning the dollar downward.

But what about the Federal Reserve? What about the epic showdown between the White House and the Fed that we were anticipating a month ago?

Trump has grand plans for tax cuts, infrastructure spending, defense spending, all manner of dollar-weakening “stimulus.” But going into 2017, the Fed was talking about raising interest rates three times a year.

Fiscal loosening, monetary tightening: What happens to the dollar — and the economy — when Trump mashes the accelerator while Janet Yellen slams the brakes?

As it happens, the Fed is wrapping up two days of meetings today. It has issued a “policy statement” right around the time this is posted. Almost no one anticipates a rate increase today; traders will instead try to read between the lines to divine the Fed’s intentions for its March 15 meeting and beyond.

But they’re wasting their breath. Jim says the outlines for the next few months are already coming into view… and the situation has changed from only a month ago. The Trump – Yellen showdown has been averted… for now.

“The dollar may get one last boost from a Fed rate hike in March, but after that, even the Fed will acknowledge that they got it wrong again and start another easing cycle,” Jim tells us.

The Fed has been lurching back and forth between tightening and easing for nearly four years now — ever since Yellen’s predecessor Ben Bernanke dropped a bombshell by telling Congress the Fed was looking to “taper” its $85 billion a month in bond purchases.

Just in the last two years, we’ve been treated to the following fits and starts…

It’s at this moment we come back to something Jim told me during a visit to our Baltimore offices on a spring day in 2014: “Don’t ever think for a minute that the central bankers know what they’re doing.” Heh…

And so the Fed is setting up to lurch back to easing — even if it won’t admit that this afternoon.

Why? “U.S. growth continues to disappoint,” says Jim. “Fourth-quarter GDP came in at 1.9%, below expectations — the final chapter on the worst year of U.S. growth since 2011, when the economy was still healing from the global financial crisis. The strong dollar is a major head wind to growth, along with flat labor force participation and weak productivity growth.”

And as we mentioned on Monday, the Fed’s preferred measure of inflation remains stubbornly below the Fed’s 2% target.

Jim’s forecast: The Fed will follow through with a rate increase on March 15 — remember, the Fed needs to raise rates so it can lower them again during a crisis — but then the increases will be put on hold.

“The fundamental weakness of the U.S. economy combined with tighter monetary conditions and a strong dollar will induce some combination of job losses, deflation and a stock market correction that will cause the Fed to back off again and ease by the spring.”

Result: “When you see a coordinated attack on the dollar from the White House, the Treasury and the Fed, you can bet the dollar will weaken. That means a higher dollar price for gold.”

And it’s not just a falling dollar that will put wind in gold’s sails during 2017. There’s also good old supply and demand.

“Vault operators have told me physical gold holders are taking gold out of banks and putting it into private vaults, where it is no longer available to prop up the paper market.”

Recall that for every ounce of real gold out there, another 100 “paper” ounces trade in the futures markets. Commercial banks whose customers put real gold on deposit effectively borrow against that gold to leverage those paper trades. It’s one way the powers that be manage to keep a lid on the price of gold. That’s why the withdrawal of that gold from the banks is so significant.

Even the mining industry says it’s running out of gold.

“Due to the price decline since 2011,” Jim explains, “new mines are not opening, output from existing mines is declining, old mines are being shut in, capex is being cut and reserves are being reduced.” 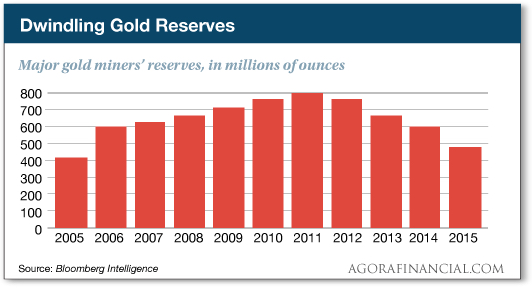 “We’re heading for a crackup,” says Jim, “where physical shortages will cause delivery failures and ignite panic buying of physical gold that even the paper market can’t contain.”