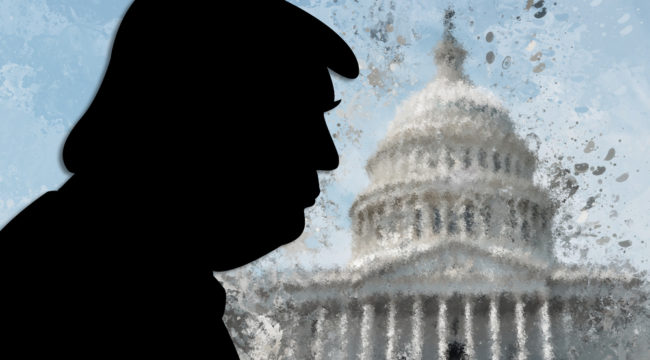 Trump Vows to Save Americans From Congress

If rumors are to be credited, the proposal would cap the annual contributions Americans can make to tax-deferred 401(k) retirement plans.

The proposal would lower maximum contributions all the way to $2,400 — a thumping difference.

Fifty-four million Americans had active 401(k) accounts as of 2015, according to the good people at the Investment Company Institute.

We suspect many of them vote.

But yesterday the president officially denied the rumors:

There will be NO change to your 401(k). This has always been a great and popular middle class tax break that works, and it stays!

Does the great and popular middle-class tax break stay as Trump claims?

Or is it subject to negotiation?

But a more fundamental question presents itself:

Why would Republicans venture upon such a proposal at all?

The answer reduces itself to two words: tax reform.

If the Republican Congress intends to lower taxes without lowering spending, it needs to locate additional revenue sources to make the shortage good.

Tax cuts must be “paid for,” that is.

But in order to give the full story, we must briefly consecrate ourself to that sleepy task…

The fellow collects his taxes at the back door on the way out when participants begin withdrawing their funds. Contributions enter the front door untaxed.

Roth IRAs, on the other hand, invert the process — they pay Uncle Sam now instead of later.

He sits at the front door and collects his toll on the way in. Unlike the 401(k), withdrawals escape the bite.

The Wall Street Journal claims federal revenues would be $115.3 billion higher this year without the 401(k) tax deferment.

The Treasury puts the figure near $600 billion over the next five years.

And here the devil emerges from the details…

By lowering the cap on tax-deferred payments from the current $18,000 to the proposed $2,400, the Republican plan would effectively force Americans into Roth IRAs… in which taxes are paid upfront.

The shell game would scare up enough nickels, dimes and quarters to help “pay for” the Republican tax plan.

By lowering that cap, Uncle Sam’s tax revenues would increase because less employee income would be shielded with the 401(k) provision.

If enacted, U.S. workers would have to switch to Roth IRAs, which are taxed on the front end but are shielded from taxes on the back end when the money is withdrawn.

Leaning more on Roth IRAs would create more tax revenue upfront for the government, and is seen by some as an accounting gimmick that creates revenue earlier and helps pay for the broader tax reform bill.

But as our colleague Dave Gonigam of The5 Min. Forecast wonders, if 401(k)s are off limits, how does Congress ensure their tax package is “revenue neutral”?

“As it is,” says Dave, “both Congress and the White House appear determined to eliminate the deduction for state and local income taxes and property taxes. What else might they do to ‘offset the revenue loss from a reduction in business tax rates that Republicans have put at the center of their plan’?”

The White House has said it would pursue looking at ways to simplify the tax treatment of retirement accounts, leaving open the possibility that there could be changes in this area.

Here at The Daily Reckoning, we propose our own three-step “revenue-neutral” tax proposal that leaves the 401(k) blessedly intact: