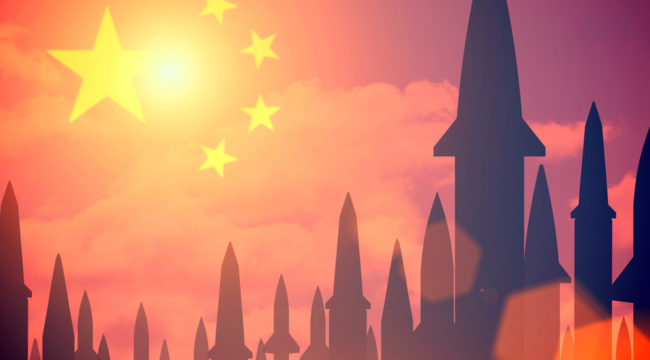 “There’s never been a presidential transition like the one we’re about to go through,” warned Jim Rickards last night. “This transition could turn the world upside down.”

Donald John Trump gets sworn in as the 45the president of these United States this Friday, high noon. And that’s when the world could start going head-over-heels…

Our very own Peter Coyne and Jim Rickards held an emergency live broadcast last evening… just a block from the White House, outside… in the January chill.

The purpose: to warn investors about a looming currency shock that could blindside markets and devastate stocks in the near future. And how to prepare for it.

On day one, huffs Trump, “China will be labelled a currency manipulator.” That’s no mere gust of rhetoric. Jim says that will begin a formal process that could end with the U.S. imposing harsh trade sanctions on China.

That, continues Jim, is “like firing the first shot of a currency war.” And China will retaliate with what Jim calls their “nuclear option.”

China’s nuclear option? We’ll return to that shortly. But first…

Chinese opinions of Trump have shifted post-election. Many initially thought he’d take a pragmatic, businesslike approach to U.S.-China relations. But many of Trump’s post-election actions have the Chinese doing a 180…

“China needs to face up to the reality,” argues a recent editorial in the Chinese Global Times, “that the Trump team maintains a hard-line attitude.”

First Trump took a post-election congratulatory call from the leader of Taiwan. That was a big no-no for China. It also broke 37 years of diplomatic protocol. China will tolerate nothing that even suggests Taiwan’s an independent state.

Rex Tillerson, Trump’s secretary of state nominee, wants to deny China access to the artificial islands it’s built in the South China Sea. A blockade, in other words. A blockade is an act of war, we mention apropos of nothing in particular.

Maybe this is all a negotiating ploy? Maybe Trump’s simply trying to bargain from a position of strength to get better trade deals, the art of the deal and all. Ask for the sun and settle for the moon. Maybe he’s much more flexible than he’s letting on.

Trump thinks he can use talk of Taiwan’s independence as a negotiating lever. But Taiwan’s a nonstarter for China, says Jim. Trump can’t use it as a lever because China would never budge a jot. “It’s like China recognizing California as a separate country,” says Jim. So Trump enters negotiations with a pair of nines instead of the royal flush he thinks.

Also, North Korea’s close to developing deliverable nuclear weapons. China has great influence over North Korea. It’s their main source of food. And Trump wants China to use that leverage to get the Norks to quit it.

But Jim says China can’t afford to cut off North Korea’s food. North Korea would then open its border and flood China with a million starving refugees. That would destabilize China — which China fears far more than even the establishment fears Trump. No deal then. Another weak hand…

And those islands in the South China Sea? Is China really going to let the U.S. Navy blockade them? Would the U.S. tolerate a Chinese blockade of an island it built in the Caribbean? What’s there to negotiate?

Jim got to the nub last night: “Trump wants things the Chinese can’t give. He’s going to demand them, the Chinese are not going to give them, Trump’s going to fire back by calling them a currency manipulator and then China’s going to go for [the nuclear option].”

China could devalue the yuan 20%, 25%, 30%, overnight. The last two times the Chinese devalued, in 2015 and early 2016, it was only a few percent. But it was enough to drop the stock market over 10% each time. Some feared stocks would never come back.

What happens if China devalues 30%?

Jim explained last night that China’s actually propping up the yuan right now. And they’re burning through their dollar reserves to do it (selling dollars and buying yuan boosts the yuan.)

But Trump’s unimpressed. And if Trump’s not offering China any reward for playing nice, what does China have to lose by devaluing? And they could have much to gain. Jim:

By propping up the yuan, China’s trying to keep the U.S. happy. But if there’s no reward for good behavior, if they’re going to be called a currency manipulator anyway, and it looks like it’s headed that way, why should they prop up the currency? Let it go down 30%. Their problem is solved. They’re not going broke propping up their currency. They can keep their reserves. Their exports will be better. And they can say they didn’t start it. The U.S. fired the first shot.

Add the numbers and it’s clear, says Jim: “We’re heading for a major clash between the United States and China.”

He thinks the fun could start Friday, next Monday or three weeks from now. Regardless, “It’s coming,” Jim says. “It’s coming.”

Stocks barely held on the last time China devalued. Can they survive the next one? We may soon get an answer…