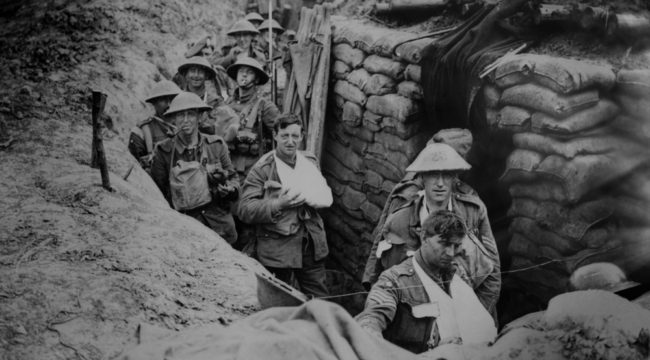 Generalissimo of American forces, John “Black Jack” Pershing, for example, thought the terms of armistice far too easy on the barbarous Hun.

Pershing wanted to read the ogres a severe lesson in American arms — to “teach them a lesson.”

Ninety-nine years ago today, on the 11th month, 11th day and 11th hour… the guns went quiet on the Western Front…

And the white dove of peace took wing.

Today we step away from our normal beat to reflect briefly upon that morning of Nov. 11, 1918… and a little-known chapter of history

At least 320 Americans fell dead that final crimson morning of the Great War.

More than 3,240 were gravely wounded.

Casualties on all sides that morning neared 11,000… exceeding the combined 10,000 casualties of D-Day, 26 years later.

Yet it had been known for two days — unofficially — that hostilities would cease the morning of Nov. 11th.

By 5:40 a.m, news of the armistice had reached the capital cities of the combatants.

Word quickly spread to the remotest switch trench on the Western Front.

So why did the feuding armies suffer more casualties that final morning than on bloody D-Day… when all sides knew the war ended that day?

So he allowed his glory hounds one final wallop.

Nine of Pershing’s 16 divisional commanders attacked right up until 11 that morning… and wouldn’t relent before the referee blew the whistle.

One commander threatened to court-martial any artillery battery chief who hadn’t fired all his shells by 11:00.

American forces took a severe trouncing crossing the River Meuse that morning… a river they could have crossed in peace had they only waited until 11 a.m.

Meantime, the 89th Division was ordered to capture the pinprick village of Stenay.

So the men could take baths.

The town had public bathing facilities, and the commanding general decided his men should take the waters of the charming French village.

The attack commenced at 8 a.m.

Perplexed German machine-gun men tried to wave off the marauding Americans rather than shoot them.

But the Yanks forged ahead… under orders from above.

By the time the war was over three hours later, 61 men of the 89th no longer required baths — but caskets.

Another 304 would have to get their baths in a hospital… after recovering from their wounds.

After the war the commander responsible for the attack was promoted to executive assistant to the Chief of Staff of the Army.

A less gaudy distinction fell to a young man under his command that morning — Pvt. Henry Gunther, of our very own Baltimore.

The poor fellow was the last allied fatality of that fateful day, Nov. 11, 1918 — and of the Great War itself.