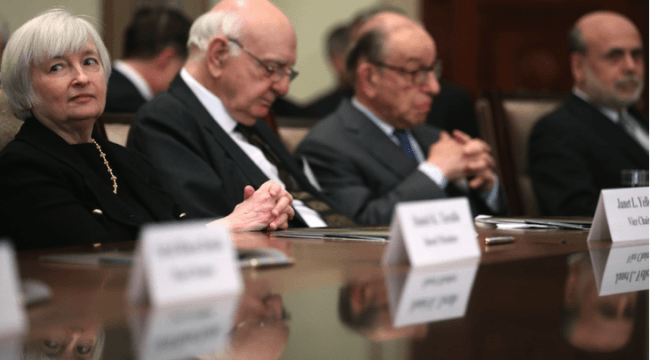 I love to use stories and narratives that revolve around fundamentals, predictions and forecasts as a way to teach the benefits of trend following. And today, we are once again afforded a fantastic teaching lesson.

After months of news headlines about a pending recession… and worries about what appeared to be the bursting of the U.S. stock market bubble… and the now subsequent market reflate… Americans have been given the “all clear.”

Janet Yellen and her predecessors, Ben Bernanke, Alan Greenspan and Paul Volcker, all agreed that the U.S. economy is in good shape.

No bubbles in sight was the gist of the lemmings-running-off-a-cliff refrain. Yellen described the current state of the U.S. economy as “sound”—whatever that might ****ing mean exactly.

Should you trust them?

Here are Dear Leader Yellen’s analytical and forecasting skills on display in 2006 in the midst of then plummeting home prices:

“Housing is a relatively small sector of the economy, and its decline should be self-correcting.”

In February 2007, in the face of even more rapidly collapsing housing prices, she saw “signs of stabilization in the housing market,” and said, “housing’s slowdown had [not] spilled into other parts of the economy.”

Let that inept drivel sink in as you remember she leads the Fed now.

Then when things got even worse in April 2008, Yellen finally admitted her forecasting skills were junk. She slunk out of sight while we dealt with the chaos.

The housing market and economy ignored her “wisdom” and flat-lined, leading to the worst recession since the Great Depression.

Last week, he said, “Just because we’ve been in 7 years of recovery doesn’t mean we’re due for another recession at all.”

Bernanke doesn’t see any more risk of a recession this year than any other year.

So why shouldn’t we have faith in him?

Because he’s the same man who as Fed chair in 2007 offered this brain fart to Congress on the then exponentially expanding housing crisis:

“At this juncture, however, the impact on the broader economy and financial markets of the problems in the subprime market seems likely to be contained.”

If by “be contained” he meant to say “burn through the global economy like a kerosene-fueled wildfire,” then Bernanke was accurate.

But keep the faith. Alan Greenspan says both Dear Leader and Ben have it right now.

Why not trust Greenspan? In 2005, he offered this:

“The use of a growing array of derivatives and… more sophisticated approaches to measuring and managing risk are key factors underpinning the greater resilience of our largest financial institutions… Derivatives have permitted the unbundling of financial risks.”

Those same non-risky derivatives sent the global economy into a near depression a few years later.

These people have no clue.

Is Paul Volcker a Trend Follower?

What about Paul Volcker?

We’re going to cut him some slack.

He’s on record saying economists are like arthritis specialists… both are better at explaining things that have already happened than at forecasting things that will happen.

Wiser words have never been spoken.

However, even with my slight praise there, some might be unnerved by my earlier criticisms of his colleagues. Some might say this is a personal attack on them.

At some point, there’s enough of the niceties. These people pretend they know what happens next.

They don’t. And we pay the price.

This is personal for me.

I am tired of reverence for people that deserve no such thing.

Do you really want to trust these people with their conflicting agendas and dubious track records?

They don’t add value to our understanding.

Think about this: Why do reporters ask Janet Yellen and other former Fed chiefs if they think there’s a stock market bubble?

Will the answer help any investor?

In fact, it’s much more likely to hurt investors, as many naïvely believe the Fed act as wise gods.

The truth is nobody knows if we’re in a bubble. The stock market could go much higher from here. It could also crash.

You need to be ready for either eventuality.

You need to be ready to go up or down.

Whatever happens, we’ll be prepared because we’ll be following the trend.

That’s how you make money.

You never make money allowing yourself to be seduced by government suits.

Government suits are synonymous with economic pain and misery.

So you always have a choice…

There’s trend following… or putting your trust in the “buy and hold” Fed manipulation crowd.

Please send me your comments to coveluncensored@agorafinancial.com. I’d love to hear your thoughts. Don’t sugar coat it!