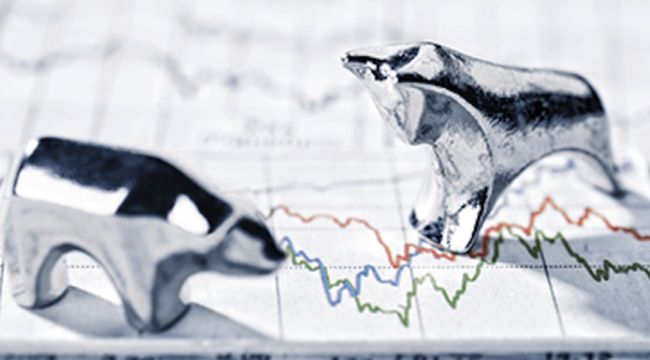 This Era of Extremes

We exist in an era of extremes.

The current economic expansion runs to record lengths. The stock market goes at — or near — record highs.

And United States household wealth rises to record highs — some 535% of GDP.

Today’s household wealth-to-GDP ratio yet exceeds the Himalayan levels preceding the 2001 and 2008 pummelings: 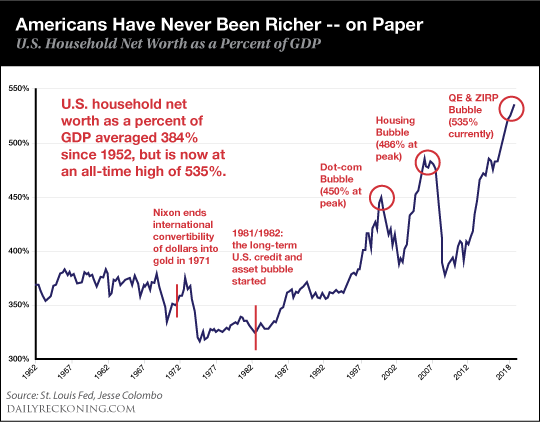 But here at The Daily Reckoning, we take the long view, the overall view… the view sub specie aeternitatis.

And seen at this distance, the extremes iron out.

That is why we are certain today’s extremes will not persist. We do not know when they will end. We know only that they will end.

And if the term “mean reversion” has anything in it… the world is in for a good hard wrenching once they do.

United States household wealth would plummet at least 25% if the previous two collapses are indications.

Next consider the stock market…

Only in 2000 Were Stocks More Expensive

By some measures stocks have never been more expensive. Today’s stock market valuations rise even above 1929’s — and leave 2008’s in the shade.

The cyclically adjusted P/E (CAPE) ratio is a popular yardstick of stock valuations.

Currently CAPE rises near 30 — nearly double the average of the past century.

Only during the great dot-com dizziness were stocks dearer than today. 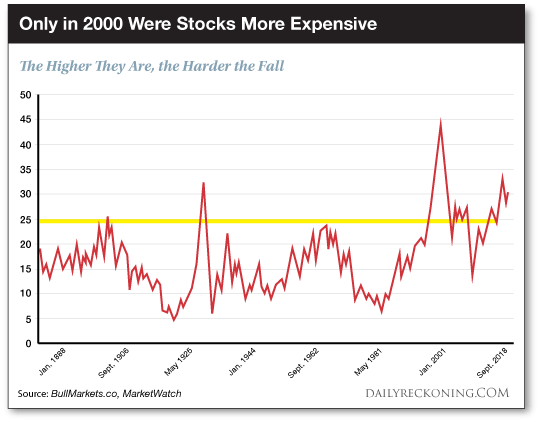 How much longer can stocks keep ahead of the pitiless laws of probability?

And how long might stocks wallow once the same pitiless laws of probability run them down?

The S&P presently goes at 3,012. What damage might 10 years of underperformance work upon it?

If returns over the next 10 years revert back to historic norms… we should expect annual returns of -2% for each of the next 10 years. In other words, the analysis suggests the S&P 500 could be around 2,300 in 2029. We caution, however, valuations can slip well below historical means, thus producing further losses…

If this mean reversion were to begin shortly, then expect the inflation-adjusted S&P 500 to fall 600–700 points below the trend over the next 10 years, meaning the real price of the S&P index could be anywhere from 1,500–2,300 depending on when the reversion occurs.

Perhaps you chuckle at the possibility of S&P 1,500 10 years from now.

But have we already glimpsed premonitions of the coming — the inevitable — mean reversion?

Yet it has delivered annualized total returns of only 5.5% in the 20 months since January 2018 — with far greater volatility.

“That certainly does not inspire confidence in the outlook for equity market returns,” he laments.

It certainly does not.

Here is a question:

What is the average annual return for the S&P since 2000?

Remember, the S&P has had a gorgeous run spanning 10 years.

Here is the answer: The S&P has returned a mere 5.4% on average.

And only the most extreme valuations in history have brought it up that high.

Imagine when valuations are sworded in half — or worse?

Meantime, John Hussman of the eponymous Hussman Investment Trust has likewise sweated through the historical data.

Zero or Negative Returns for the Next 12 Years

His conclusion, based on current valuations?

At current valuation extremes… [investors’] actual basis of wealth — the likely future stream of cash flows that will be delivered into their hands over time — is the smallest amount, relative to those “paper prices,” since the 1929 and 2000 extremes.

Since we have speculated upon the S&P, let us direct our attention to the Dow Jones…

Given today’s impossible valuations… how far might the Dow Jones drop next time?

A simple econometric model whose inputs are past bear markets and CAPE values predicts that if a bear market were to begin from current levels, the Dow would tumble 35.3%. Though that’s less severe than the 2007–09 bear market, it still would sink the Dow below 17,000.

The Recession Countdown Has Begun

Meantime, the Federal Reserve has just lowered interest rates again. It is the second rate cut since the hiking cycle ended last December.

We are convinced more cuts are in prospect.

Yet here is a fact of capital significance:

Each instance of Federal Reserve easing — with the lone exceptions of 1967 and 1996 — has preceded recession.

And look at the past three recessions. Each commenced within three months of the first rate cut that ended a hiking cycle.

Recall, the first rate cut that ended a hiking cycle fell in July.

By this dismal calculus, recession could be underway next month.

But it would not be immediately apparent. Recessions often go unidentified for as much as one year after their onset.

Of course, we could be mistaken. And the economy could rub along for another year… or longer.

But remember to take the long view… and consider reversion to mean.

The scales will once again balance even. And the great equalizer of time will level things out.

The day, the hour, we cannot say.

But as we have noted before:

The mills of God grind slowly. Yet they grind exceeding small…