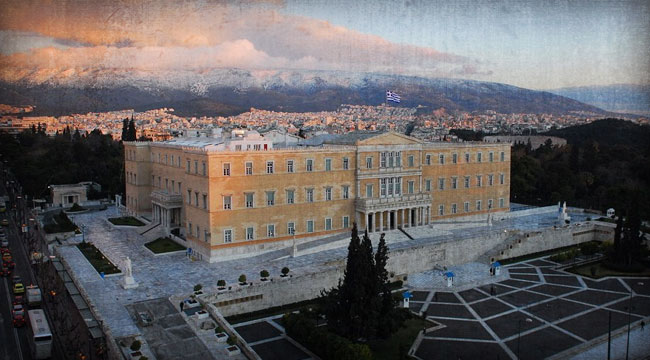 There Will Be No "Grexit"

Greece’s headline drama will unfold the same way it has for the last five years. There will be a lot of turmoil. I’m not saying there aren’t problems in Greece; there are big problems there. But what I’ve said all along going back to 2010 is that Greece isn’t leaving the euro; there will be no Grexit.

Nobody’s going to get kicked out or quit.

Now that doesn’t mean everything’s fine in Greece. They could have bail-ins, nationalizations, bond defaults and a lot of economic disruption around the country. None of that is the same as Greece leaving the euro, however. I’m confident in my assessment because this isn’t solely an economic issue; it’s also political.

I’ve often referred to Europe today as the Fourth Reich. Go back to 1991; Margaret Thatcher was opposed to German reunification because she said every time the Germans get back together they take over Europe. They’re doing it again today, except economically and politically.

There’s a political will to keep Greece in the euro. If you look at Greek polls the Greek people overwhelmingly favor the euro. They don’t like the austerity that goes with it, but they favor the euro.

Germany wants Greece in the euro, too. The political will is there and they will stay — everything else is just a detail.

But before we get too far, a little background might be helpful to you. As I say, this issue is political, economic and theatrical at times with a lot of moving parts.

Greece is part of the European Union (EU), obviously. But the EU is a larger economic group. Within the EU you have what’s called the “eurozone.” Those are 19 countries that issue the euro and use the euro as their currency and Greece is one of them.

Today, Greece is in an awful debt crisis. A few years ago there was even a partial default where they restructured some bonds.

Since then, they’ve been getting bailouts from something called the “Institutions.” Interestingly, it used to be called the “Troika,” but I think the Greeks were a little bit offended by that, so the Germans changed the name.

But the Troika or Institutions are three entities: The European Central Bank, the European Union itself operating through special purpose entities, and the International Monetary Fund (IMF). These are the three places that Greece has received its bailout money from.

As always there’s what the Institutions call “conditionalities.” For example, they might tell Greece, “OK. We’ll give you the money you need. But you have to agree to certain conditions. And if you don’t abide by the conditions, we won’t give you the money.”

It’s a forcing mechanism to get Greece to change its political and economic arrangements. That’s been going on for a few years.

The money’s also disbursed in tranches meaning they’ll give Greece some of the money but not all of it. The Institutions will check the conditions set before releasing subsequent tranches. That’s the basic background for where we are now.

Today, Greece’s Syriza party — a more socialist, left-leaning party — has said to the Institutions “We’re not going to agree to the conditions anymore. They’re too harsh. We’re cutting pensions. We’re cutting government spending. We’re running a primary surplus. Unemployment is over 25 percent. We’re not getting the growth that was promised. This whole thing doesn’t work. So we want to, in effect, tear up the deal and start over. We’re not saying we won’t do a deal, but we’re saying we want new terms and conditions.”

Syriza was elected on that platform and, of course, Greece is a democracy. They have to respect the will of their voters.

That’s why we have today’s train wreck.

On the one hand, the EU and the so-called Institutions — the old Troika — are insisting that they will not give Greece any more money unless they meet certain conditions.

Meanwhile, Greece is saying, “We’d like some more money, thank you very much. But we’re not going to meet the conditions. We want a new deal.” All the while, the clock is ticking and Greece has major bond payments and interest payments due. This is why analysts are talking about Greece exiting the euro — the “Grexit.”

There’s no precedent for such a course. No member of the eurozone has ever quit or been forced out. The expectation then is that Greece would go back to the drachma. The drachma was their old currency before they joined the euro.

Of course, when a country has its own currency, it can print as much as they want. So the theory goes, they could exit the euro, go back to the drachma, their central bank could print drachma and pay their bills. But of course they would default on all the euro-denominated debt.

Let me spend a minute on what I call the game theoretic approach. It will show why this scenario is unlikely.

You have to say, “What would that actually mean? How will that actually play out? If one side acts that way, what does it mean for their constituency? Or other people — will the rest of the European Union or, for that matter, Austrian, Dutch, or German citizens be on the receiving end of any bad consequences?”

Some analysts claim “Greece leaving the euro is no big deal.” I couldn’t disagree more. Think of such a situation three steps ahead from the Institutions’ perspective.

And I kept looking at the situation and saying, “This crisis is not over. These are dominoes that are falling. Each one’s hitting the next one and taking the crisis further. We don’t have resolution.”

As I expected, Lehman Brothers was next, and then AIG behind that. Then we saw how bad things got between October of 2008 and the stock market bottom in March 2009 when investors lost 30 to 50 percent of their net worth on that market decline. Not just stocks, but real estate and other assets across the board.

So I see these dominos falling if Greece goes. It’s not about Greece — it’s about Spain, Italy, Portugal, Ireland. It’s about the whole eurozone. It’s about confidence.

That doesn’t mean that if Greece quits the euro, that the next day Italy says, “Oh, we’re quitting too.” I’m not saying that. What I’m saying is that markets will do the job for them.

You don’t need Italy and Spain and Portugal to quit. You just need investors to say, “Well, wait a second. Nobody thought Greece would quit. But they did. And now nobody thought these bonds would default, but they did. So maybe these other things can happen too.”

People would lose confidence in the euro itself. That’s would raise costs. That’s the danger. It’s the contagion and what happens in investors’ minds.

Europe’s leaders understand that. That’s the motivation for both sides to come to the table.

Why is Greece making such a big deal out of this?

Well, one of the things they’re saying is: “This austerity is causing us to cut pensions. We have Greek workers who had worked for 20 or 30 years. And, as part of the conditionality of the European loans,” which I explained above, “we’re required to cut those pension benefits. And we don’t like hurting the pensioners. That’s not fair.”

Going back to game theory, assume Greece quits the euro. The country defaults on its debts. That means they go back to the drachma. What happens then?

Nobody in the world wants drachma so their foreign direct investment’s going to dry up too. They’re not going to be able to finance anything. They will be able to print money. That’s all they’ll be able to do. That means hyperinflation, which destroys Greek pensions.

So, when the Greek government says they’ll play hardball with Europe to preserve Greek pensions, remember their alternative is: go back to the drachma and destroy the pensions anyway.

Greece wants to play hardball, but it knows if it leaves the euro it’s a disaster. Europe knows it will also be a disaster if the kick Greece out of the euro. It’s not that Europe cares about Greece or vice versa, but that they each care about themselves. That’s what drives a negotiation forward.

So, in a prisoner’s dilemma, you have to not only think about what you want to do, but about what is the other player is going to do. The way out of the dilemma is to assume that everybody’s rational.

This will get resolved, in my view. But six months from now or a year from now, we could be at it again. I could be writing to you about the same dynamics at work. Any resolution is just buying time in hopes the economy grows. That’s a separate, bigger-term, structural issue that’s not going away.

But, in the short run, I do expect Greece and Europe to reach an agreement.

Probably a core group that would involve Germany, the Netherlands, the ECB, and Greece, and probably someone from the IMF — a small group of five or six people meeting, who knows?

You know, at a restaurant or some out of the way place with no press involved, no posturing, and a bunch of lawyers waiting outside the room, wordsmithing, trying to come up with the right presentation. That’s where we are right now. There will be no Grexit.

P.S. If you haven’t heard, I’ve just released a new book called The Big Drop. It wasn’t a book I was intending to write. But it warns of a few critical dangers that every American should begin preparing for right now. Here’s the catch — this book is not available for sale. Not anywhere in the world. Not online through Amazon. And not in any brick-and-mortar bookstore. Instead, I’m on a nationwide campaign to spread the book far and wide… for FREE.

Because every American deserves to know the truth about the imminent dangers facing their wealth. That’s why I’ve gone ahead and reserved a free copy of my new book in your name. It’s on hold, waiting for your response. I just need your permission (and a valid U.S. postal address) to drop it in the mail. Click here to fill out your address and contact info. If you accept the terms, the book will arrive at your doorstep in the next few weeks.