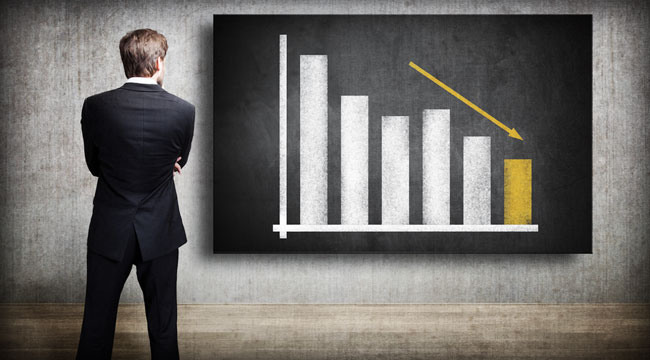 The Warren Buffett Economy -- Why Its Days Are Numbered (Part I)

During the 27 years after Alan Greenspan became Fed chairman in August 1987, the balance sheet of the Fed exploded from $200 billion to $4.5 trillion. Call it 23X. 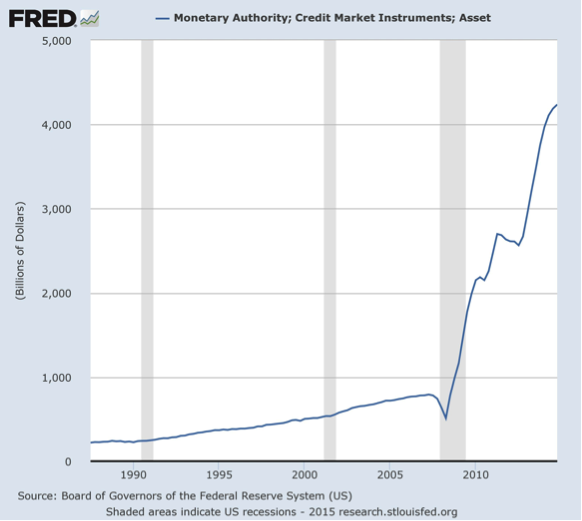 During those same years, the value of non-financial corporate equities rose from $2.6 trillion to $36.6 trillion. That’s on the hefty side, too—- about 14X. 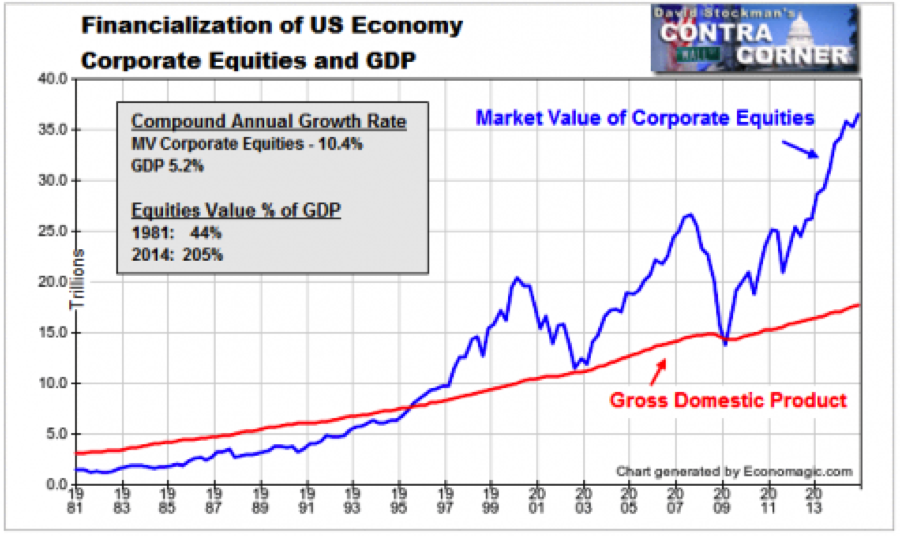 When we move to the underlying economy that purportedly gave rise to these fabulous gains, the X-factor is not so generous. As shown above, nominal GDP rose from $5.0 trillion to $17.7 trillion during the same 27-year period. But that was only 3.5X

Next we have wage and salary compensation, which rose from $2.5 trillion to $7.5 trillion over the period. Make that 3.0X.

Then comes the median nominal income of US households. That measurement increased from $26K to $54K over the period. Call it 2.0X.

Digging deeper, we have the sum of aggregate labor hours supplied to the nonfarm economy. That metric of real work by real people rose from 185 billion to 235 billion during those same 27 years. Call it 1.27X.

Finally, we have real median family income. Call it a round trip to nowhere over nearly three decades!

OK, its not entirely fair to compare Warren Buffet’s 35.0X to the median household’s 0.0X. There is some “inflation” in the Oracle’s wealth tabulation, as reflected in the GDP deflator’s rise from 60 to 108 (2009 =100) during the period. So in today’s dollars, Buffet started with $3.8 billion in 1987. Call his inflation-adjusted gain 19X then, and be done with it.

And you can make the same adjustment to the market value of total non-financial equity. In 2014 dollars, today’s aggregate value of $36.7 trillion compares to $4.5 trillion back in 1987. Call it 8.0X.

Here’s the thing. Warren Buffet ain’t no 19X genius nor are investors as a whole 8X versions of the same. The real truth is that Alan Greenspan and his successors turned a whole generation of gamblers into the greatest lottery winners in recorded history.

That happened because the Fed grotesquely distorted and financialized the US economy in the name of Keynesian management of the purported “business cycle”. The most visible instrument of that misguided campaign, of course, was the Federal funds or money market rate, which has been pinned at the zero bound for the last 78 months. 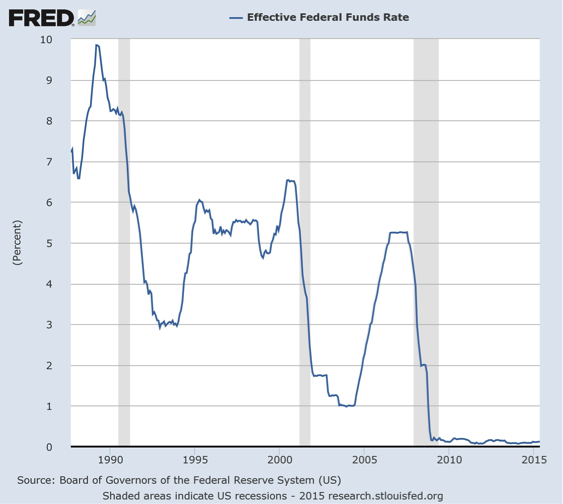 Not only did the Fed spend 27 years marching toward the zero bound, but also in the process it has gotten addicted to it. During the last 300 months, it has either cut or kept flat the money market rate 80% of the time. And it has now been 108 months since it last raised interest rates by even 25 basis points! 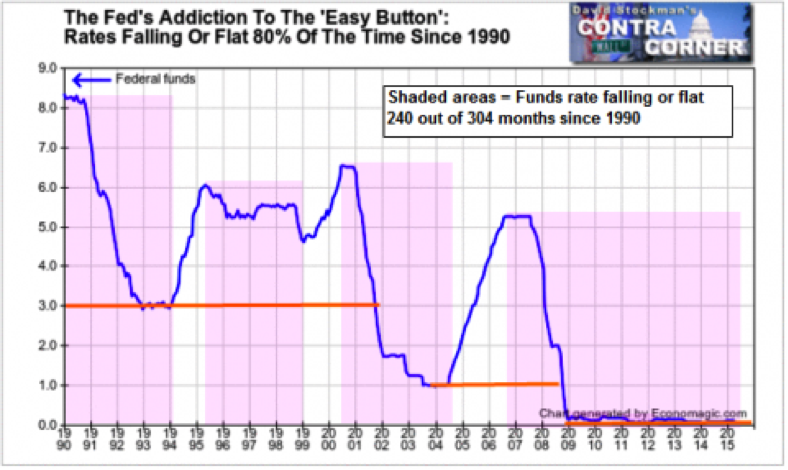 The simple truth is, the Fed has caused systematic, persistent and massive falsification of prices all along the yield curve and throughout all sectors of the financial market. The single most important price in all of capitalism is the money market rate of interest. It sets the cost of carry in all asset markets, and therefore indirectly fuels the bid for all debt, equity and derivative securities in the global financial system.

Needless to say, when the cost of money is set at— and held at— zero in nominal terms, and driven deeply negative in after-inflation and after-tax terms, it becomes the mother’s milk of speculation.

Accordingly, it is neither a slightly lower trend rate of CPI inflation over the past 27 years nor an improvement in the art of central banking which has driven the core reference rate in the world financial markets—the 10-year US Treasury note — down by 80%.

Instead, the true agent of that decline is massive central bank intrusion into financial markets, wholesale manipulation of prices and fraudulent monetization of public debt and other securities. Just since 2006, the combined balance sheets of the world’s central banks have expanded from $6 trillion to $22 trillion, meaning that the scale of the implicit monetary fraud has been monumental. 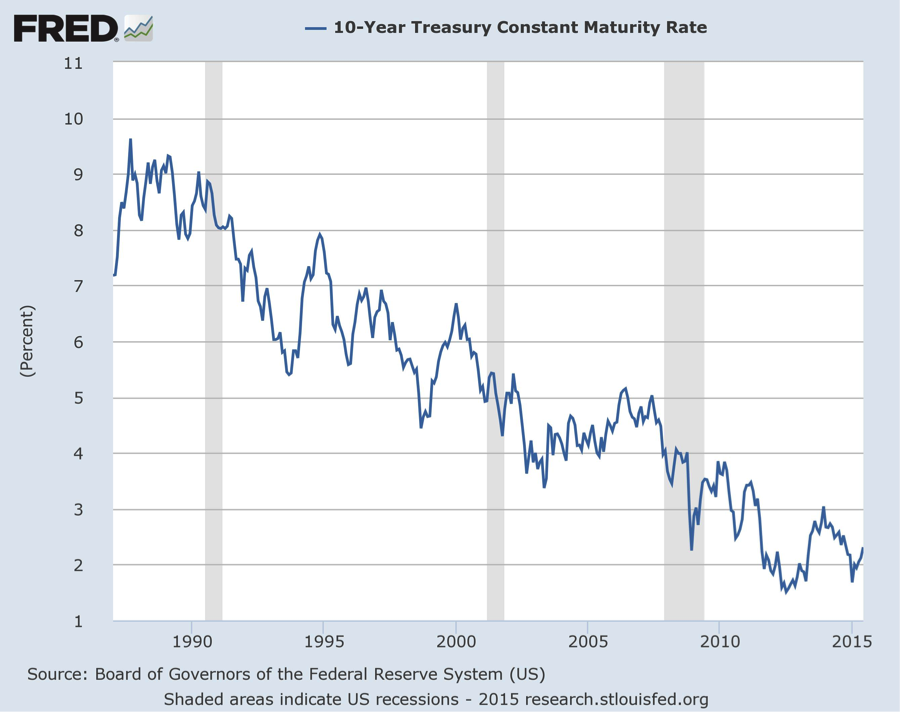 Needless to say, the plunge of the world market’s core “cap rate”  to what are false and unsustainably low levels caused two powerful distortions. In the DM economies like the US, it generated an enormous expansion of unproductive debt that funded fiscal expansion, household consumption and business financial engineering.

The result was a massive financialization of the economy that took the sum of business debt and market equity from about $12 trillion at the time of Greenspan’s arrival at the Eccles Building to $93 trillion today. Stated differently, the value of debt and equity securities mushroomed from about 2.4X GDP to 5.4X.

It was this massive financial bubble that begat paper wealth gains of 8X and 19X and even more.

Secondly, the worldwide central bank financial repression led by the Fed resulted in massive over-investment in fixed productive assets on a global basis, but especially in China and the emerging markets. The impact was a one-time acceleration of global economic activity that temporarily inflated current income and further goosed the value of financial assets.

This central bank fueled boom will ultimately be paid for in the form of a prolonged deflationary contraction. Then, trillions of uneconomic assets will be written off, industrial sector profits will collapse and the great inflation of financial assets over the last 27 years will meet its day of reckoning.

On the morning after, of course, it will be asked why the central banks were permitted to engineer this fantastic financial and economic bubble. The short answer is that it was done so that monetary central planners could smooth and optimize the business cycle and save world capitalism from its purported tendency toward instability, underperformance and depressionary collapse.

As will be shown in Part 2, tomorrow, the whole case for this sweeping and unprecedented Keynesian demand management by the monetary authorities was a crock.

Accordingly, the days of the “Warren Buffet economy” are indeed numbered.

In today’s world, all money is debt… If all debt disappears, money disappears too…