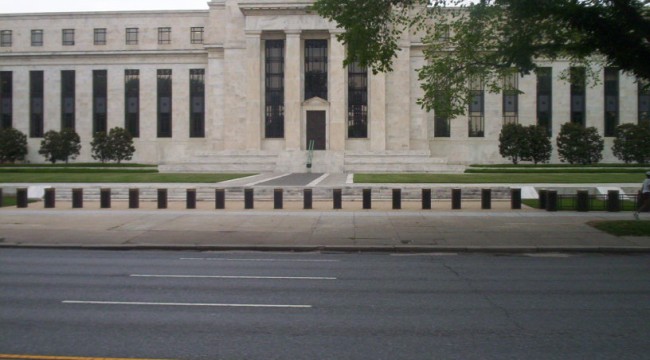 The Warren Buffett Economy -- Why Its Days Are Numbered (Part 3)

During the last 27 years the financial system has ballooned dramatically while the US economy has slowed to a crawl—–a divergent trend that has intensified with the passage of time. For instance, since Q4 2000, nominal GDP has expanded by just 70% compared to a 140% gain in market finance (i.e. the value of non-financial corporate equity plus credit market debt per the Fed’s Flow Of Funds report).

As a consequence, and as we previously demonstrated, the ratio of finance to economic output has soared to nearly 540% of national income compared to a historic norm of about 200%. Had even the stabilized ratio of 240% that the Volcker sound money policy had put in place by 1986, for example, remained at the level, total credit market debt and equity finance would be $50 trillion lower than today’s gargantuan $93 trillion total. 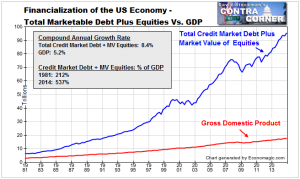 Even when you purge the cumulative price inflation out of the above picture, the story does not remotely add-up. While real median household income has not gained at all since the late 1980s, and thus currently stands at just 1.03X of its 1987 value, the GDP deflator-adjusted value of corporate equities and credit market debt outstanding stands at 8.0X and Warren Buffett’s real net worth at 19.0X.

The question remains why did the Fed expand its balance sheet by 22X over the past 27 years (from $200 billion to $4.5 trillion)? After all, the empirical result was a sharp slowing of main street growth, a massive financialization of the US economy and monumental windfalls to financial speculators who surfed on the $50 trillion bubble.

Warren Buffett is not a genius and did not invent anything — even a unique method of investing and allocating capital. He may have read Graham and Dodd as a youthful investor, but his nominal net worth did not grow from $2.1 billion in 1987 to $73 billion at present by following the old fashioned precepts of value investing.

Instead, he bought the obvious consumer names of the baby boom demographic wave like Coke and Gillette; had a keen ear for buying what he believed slower footed investors would also be buying later; appreciated the value of banks and other companies that suckled on the public teat; and mainly rode the 27-year wave that caused finance to soar from $12 trillion to $93 trillion after Greenspan took the helm at the Fed.

Stated differently, under a regime of honest money and free market finance no mere insurance company portfolio manger could make 19X in real terms in 27 years. Yes, perhaps a real inventor of something fundamentally new and economically transformative could — such as Thomas Edison, Henry Ford or Bill Gates.

But the better part of St. Warren’s fortune was manufactured in the Eccles Building. Even he backhandedly admitted as much in his famously gratuitous letter thanking the Fed for bailing out the financial system (and his investment in Goldman, Well Fargo and other financial institutions) during the so-called financial crisis.

The mythology of Buffett’s purported investment prowess, however, is just emblematic of the larger narrative that obfuscates the destructive monetary regime that has been in place since Greenspan’s accession. As the mainstream narrative has it, the $50 trillion bubble embedded in the above graph is completely natural and a sign of long-term progress — even if its expansion has thus far been interrupted by thundering meltdowns in 2000-2001 and 2007-2008.

Of course, the latter are chalked off to exogenous factors, not the doings of the central bank. The devastating financial busts since 1987 were owing to a mix of too much investor exuberance, too much deregulation and a smattering of Wall Street greed and corruption, too.

That’s not to overlook some of the more far-fetched reasons for the two big financial meltdowns of this century. The Greenspan-Bernanke fairy tale that Chinese workers making under $1 per hour were saving too much money, thereby causing low mortgage rates and a runaway housing boom in America, stands at the top of that list.

As indicated in Part 2, the assumption that market capitalism is chronically and destructively unstable and that the business cycle needs constant management and stimulus by the state is belied by the historical facts. Every economic setback of modern times, including the foundation events of the Great Depression, was caused by the state — either in the form of inflationary war finance or central bank fueled credit expansion — not by the deficiencies or inherent instabilities’ of market capitalism.

So while the rationale for monetary central planning is bogus, the model on which state intervention is based is even more invalid. To wit, its assumes that the US is essentially a closed economy, and that what ultimately matters is aggregated volumes, not the discrete billions of prices, including the price of labor and capital, which comprise the real economy.

For reasons I have previously explained, Keynesian aggregate demand management tools seemed to work for about three decades but it all amounted to a one-time monetary parlor trick. That is, households and other economic actors were repeatedly induced to “lever up” via periodic cycles of cheap money stimulus, but that simply borrowed economic activity  from the future; it did not generate new, sustainable wealth. And now it doesn’t work anyway because balance sheets are fully leveraged relative to income.

Nevertheless, the theory of this baleful regime of monetary central planning was that the capitalist business cycle is always falling short of an economic ether called “aggregate demand”. The latter is purportedly a quantity of household and business “spending” which should be happening in order too fully utilize domestic labor and business capacity.

Accordingly, it is the job of the state — the fiscal authorities in the original Keynesian incarnation and now essentially the central bank — to supply the missing “demand” so that presently the nation’s economic bathtub will be filled to the brim with labor fully employed, industry at full capacity, government coffers at “full-employment” revenues and unicorns prancing around happily throughout the land.

Here’s the thing. The whole potential GDP and full employment story is a crock. It consists of a bunch of made-up benchmarks that are absolutely meaningless in today’s global, fluid and  technologically dynamic economy. Indeed, these potential GDP and full employment benchmarks are so silly, primitive, constantly changing and logically superficial as to beg the question. Namely, if massive financialization and cheap money were not so convenient for Wall Street and Washington alike, would real adults  actually take them seriously?

I think not. Yet the reason the Fed and its fellow central banks maintain their constant state of intrusion in the financial markets, including what will soon be 80 months of ZIRP lunacy, is purportedly to help close the gap between actual and potential GDP.

Well, let’s see. Everyone knows this is a service economy so how do you measure the capacity of Pilates studios and whether their instructors are fully employed? Should that count seven days a week and two eight hour shifts of instruction per day or what? And does it count solos, duets, group sessions or what as output?

How about black car limo fleets and drivers. Now that Uber has arrived in a lot of cities with service on demand,  limo fleets do not spend half of their time sitting around waiting for clients anymore. Huge latent fleet capacity has thus been liberated by technology in this instance, and in too many like and similar circumstances to even recount.

Likewise, in a globalized market for labor, what counts is the price of labor (i.e. the wage rate) not the theoretical volume of unused bodies deemed to be in the labor force by the lights of the BLS.  If domestic labor is over-priced on the margin, which it surely is in the US, then no amount of aggregate demand stimulus is going to put displaced textile and furniture workers back to work.

Worse still, when monetary central planning is practiced on a global basis, as it has been for most of this century, it causes enormous over-investment in industrial capacity owing to the repression of capital costs. To take one example, China now has more excess steel capacity than the entire steel industry of the US and Europe combined.

That excess is now beginning to massively flow into the world steel market as the overlords in Beijing desperately try to cool down their out of control credit and construction bubble .Consequently, the capacity utilization figures for domestic iron and steel are just noise insofar as monetary policy intervention is concerned, yet it comprises part of the potential output benchmark on which the Fed predicates its incessant monetary pumping.

David Stockman
for the Daily Reckoning

I originally posted this series, right here, at my Contra Corner blog.