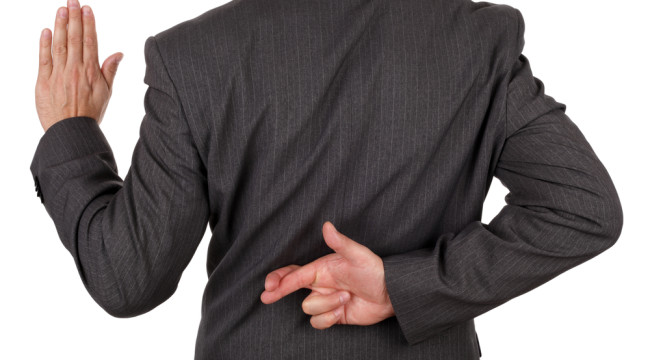 I have come to the point that I cannot believe a thing President Obama says. That’s not quite the same as saying I don’t believe anything he says. When he speaks he may be telling the truth, he may not be, or he may be parsing his words to mislead. But it’s impossible to know which is which?

It has been his pattern since, well, forever, as John Heilemann and Mark Halperin demonstrate in their excellent book on the 2008 presidential election, Game Change.

One revealing passage recounts Obama’s decision to run for president. The authors quote him in 2005 telling Senate Chief of Staff Pete Rouse, “I can assure you there’s no way I’m running [in 2008].”

In 2006 he told Meet the Press’ Tim Russert that he would “absolutely” serve out his full first term in the Senate. “So you will not run for president in 2008?” Russert is quoted as asking. “I will not,” Obama answered.

The president criticized his opponents for saying he was against drilling for oil and gas. He then boasted that oil and gas production have been higher than ever under his administration.

Later, Obama-confidant Valerie Jarrett questioned him about the absoluteness of his response. Heilemann and Halperin quote Obama as saying, “You can always change your mind.”

Yes, you can, and have, Mr. President, which partly explains the public-trust deficit. Thinking people who reflect and debate issues do sometimes change their mind. (I know I do.) But dissimulators can also use it as an excuse to dismiss previous statements to the contrary.

Does anyone — ANYONE — really believe Obama wasn’t virtually certain he would run for president in 2008 even though he absolutely denied it to Russert? So how does one know when the president means what he says vs. plans to become a “mind-changer”?

With respect to Syria, the president tells us there will be no U.S. boots on the ground. Um, would that be like:

Or how about when Obama told Fox News host Bill O’Reilly that he hadn’t raised taxes when there were 21 new or increased taxes in Obamacare alone. Or when he claimed that he didn’t draw the “red line” with respect to Syria, the international community did, when it is very obvious from his taped statements that he alone drew the line.

And when Obama or his team aren’t asserting something that is demonstrably false, they are frequently making claims that might be technically true, but are intended to mislead.

For example, during the last presidential campaign the president attacked his critics because they claimed that the size of government had grown under his watch when it had actually decreased.

The fact is that the number of federal employees had increased significantly, while the number of state employees had declined, primarily because of tight state budgets. Taken together the total was smaller. But the president had no control over the hiring and firing of state employees. So while that number declined, he had nothing to do with it. Where he did have control, federal employees, that number had grown.

Take another example. The president criticized his opponents for saying he was against drilling for oil and gas. He then boasted that oil and gas production have been higher than ever under his administration.

Yes, but the vast majority of that drilling has been done on private land — where the president has no control. As for drilling on public lands, which his administration does control, drilling was significantly lower.

Was what Obama claimed a lie? Not technically, but neither was it the truth, because it was purposely intended to mislead.

These are only a few of the many, many instances where Obama or his minions have been caught in false, deceiving or misleading statements — even under oath. It has become so pervasive that people have grown very skeptical of the president’s assertions.

Yet amazingly, some of those same skeptics now defend Obama’s claim that U.S. troops will not be used in Syria. Would that be like his absolute denial to Russert? Maybe Obama means it, or maybe he’ll change his mind. No one can know for sure.

The country needs to be able to trust a president and his staff and believe what they say. But that’s not the case anymore. Maybe Heilemann and Halperin would have better captured the moment if they had named their book Mind Change.

Merrill Matthews
for The Daily Reckoning

The U.S. Wants Assad -- Not ISIS In The Middle East

In the last week, U.S. forces have shot down two Syrian government aircraft. On the surface this sounds pretty reasonable — Syria shouldn’t mess with the U.S. But Managing Editor Davis Ruzicka has a different viewpoint that paints another picture. One that the mainstream media refuses to acknowledge — the REAL reason why the U.S. is shooting down Syrian aircraft, and why the U.S. in constantly involved in Middle East affairs…

Merrill Matthews, Ph.D., is a resident scholar with the Institute for Policy Innovation, a research-based, public policy “think tank.” He is a health policy expert and weekly contributor at Forbes.com. He also serves as Vice Chairman of the Texas Advisory Committee of the U.S. Commission on Civil Rights.