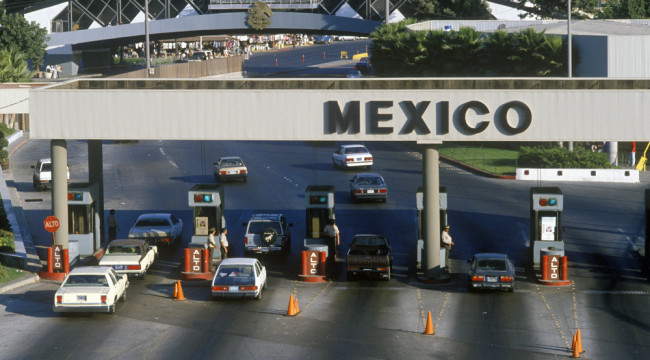 One of the greatest Western movies of all time was The Magnificent Seven starring Steve McQueen, Yul Brynner and James Coburn.

It told the story of seven American gunslingers who came to the rescue of a Mexican village besieged by banditos.

The villain of the film, Calvera, was the bandito gang leader memorably portrayed by Eli Wallach in one of his best, and most sinister, roles.

Today another story is unfolding between the U.S. and Mexico. This time, America is not riding to the rescue but is actually the villain.

The Federal Reserve’s tight money policies of the past two years (yes, you read that right, tight money, due to tapering and threats to raise rates) have resulted in a global slowdown that has Mexico in the cross hairs.

The long, shared border between the United States and Mexico has been much in the news lately. Yet the U.S. and Mexico are linked in far more complex ways than a shared border.

Those linkages can be positive for both economies when growth is robust and trade is expanding. But the opposite is true. When growth is slowing in the U.S., it is impossible for Mexico to avoid the consequences.

And when Mexican growth is slowing on its own, slowdowns in both countries create an adverse feedback loop with negative implications for Mexican capital markets.

I specialize in combining geopolitical intelligence with dynamic systems analysis. I do this to identify instability in capital markets before the instability results in an actual collapse.

These collapse points are called “phase transitions” by physicists who study the same phenomena in other systems. Mexico appears poised on the brink of just such a collapse.

Mexico is the third-largest trading partner of the U.S., after Canada and China. Mexico has important trading relationships with China and Canada as well, the latter greatly expanded under NAFTA. All four economies — the U.S., China, Canada and Mexico — are slowing perceptibly.

Canada is officially in a recession. Mexico and the U.S. may not be far behind.

China is not technically in a recession. This is due partly because it starts with such a high growth rate. Yet its precipitous decline in growth (from about 8% in recent years to 5% today, adjusted for wasted investment) represents massive lost output even if output is still in positive territory.

It is difficult to see how Mexico can avoid a recession when all of its major trading partners are hitting the brakes.

Mexico has a host of indigenous economic problems apart from weak growth among its trading partners. The most obvious is the collapse in oil prices over the past year. The oil price crash affects Canada and the U.S. as well, but Mexico is even more dependent on energy than its North American neighbors.

Mexico is also vulnerable because its banking sector is highly concentrated and largely foreign owned. In a recent article, analyst Nomi Prins points out that five Mexican banks own 72% of the total banking assets in Mexico.

This concentration of Mexican banking assets in U.S. and European hands means Mexican liquidity can be starved for reasons having nothing to do with Mexico.

If U.S. and European banks decide to retrench because of Basel III-type regulation, Mexican credit markets will be collateral damage.

Mexico shares many of the problems common to other emerging markets that we have written about recently. These markets, which include Mexico, Malaysia, Korea and Turkey, have all gorged on cheap dollar debt facilitated by the U.S. Federal Reserve’s zero interest rate policy.

When domestic corporations in these countries are faced with a choice between borrowing in local currency at, say, 6% interest or U.S. dollars at 3%, they prefer the lower interest rates available with dollar loans. Of course, these borrowers assume the dollar will be stable against their own currencies.

That assumption turns out to be false.

The dollar has surged to its highest levels in 10 years. Any savings from the lower dollar interest rates have been wiped out by the foreign exchange losses. Some of those losses were hedged over the past year, but the hedges are now expiring, and the losses are piling up. Defaults and some bankruptcies will not be far behind.

Those dollar-related credit defaults are in addition to energy-related defaults that are also emerging. Many oil exploration and development projects were started based on the assumption that oil prices would remain at $70 per barrel or higher.

With oil trading much lower (and capped out at $60 per barrel by Saudi Arabia), these projects no longer make sense. Apart from credit defaults, the oil sector is seeing layoffs and slashed capital expenditures. This will only contribute to the slowdown already visible in the trade and fiscal sectors.

Mexico has been a model of an emerging market that embraced the “Washington consensus” policies. The policies consist of free currency convertibility, open capital accounts and floating exchange rates.

This works fine when capital is flowing in. But an open capital account is a two-edged sword. When liquidity dries up, capital can run for the exits in search of higher yields or greater safety.

This is beginning to happen in Mexico, with reserves declining as the central bank engages in a futile effort to prop up the Mexican peso.

Many of Mexico’s vulnerabilities are not homegrown but are a consequence of U.S. Federal Reserve tightening policies since 2013.

The U.S. tightening began with Ben Bernanke’s “taper talk” in May 2013 and continued with the actual taper of asset purchases from December 2013-November 2014.

This was quickly followed by Janet Yellen’s threats to raise interest rates in 2015 and a resulting surge in the exchange value of the U.S. dollar. Yellen had recently backed off from the tough talk, but the damage to emerging markets had already been done.

Mexico also suffers from around 25,000 homicides per year, most of which are related to drug gang turf wars. That story is not new, but it gains prominence when foreign investors get nervous for other reasons.

Finally, presidential candidate Donald Trump has promised to build a massive wall along the U.S.-Mexican border. His promise also includes his plans to make Mexico pay for it.

He has threatened to hurt U.S. companies such as Ford that relocate jobs and new investments to Mexico. Without passing judgment on Trump’s policies or the likelihood of his election, the talk alone is enough to damage foreign investor perceptions of Mexico.

The Mexican stock market has declined slightly in the past year, but that decline is from a high level and has much further to fall.