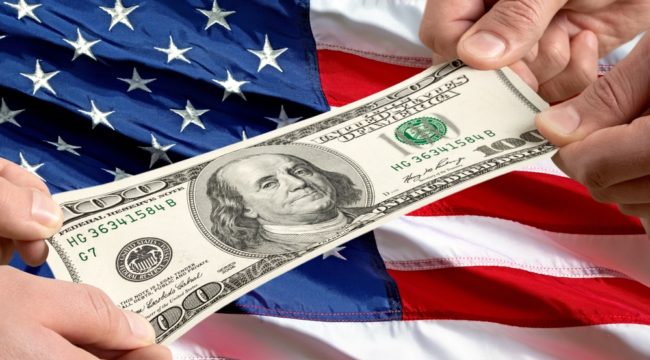 The United States Is Going Broke

Those who focus on the U.S. national debt (and I’m one of them) keep wondering how long this debt levitation act can go on.

The U.S. debt-to-GDP ratio is at the highest level in history (106%), with the exception of the immediate aftermath of the Second World War. At least in 1945, the U.S. had won the war and our economy dominated world output and production. Today, we have the debt without the global dominance.

The U.S. has always been willing to increase debt to fight and win a war, but the debt was promptly scaled down and contained once the war was over. Today, there is no war comparable to the great wars of American history, and yet the debt keeps growing.

In a new Weekly Standard article, the celebrated James Grant of Grant’s Interest Rate Observer reviews not only the current debt and deficit situation but provides an overview of the U.S. national debt since George Washington and Alexander Hamilton.

Grant makes the point that the debt has been increased and decreased on a regular basis but never until today was there a view that the deficit didn’t matter and could be increased indefinitely.

He points out that it took the United States 193 years to accumulate its first trillion dollars of federal debt. And amazingly, that it will add that much in the current fiscal year alone.

Grant also describes how these historic debt management efforts have been bipartisan.

Republicans Harding and Coolidge reduced the debt; the Democrat Andrew Jackson actually eliminated the debt in 1836. Today there is bipartisan profligacy. The article lays out the big picture and the likelihood of a U.S. debt crisis sooner rather than later.

The U.S. budget deficit under Trump is approaching $1 trillion per year, similar to what we saw in 2010 and 2011 under Obama. This is the result of tax cuts (that don’t “pay for themselves”), removal of spending caps, snowballing student loan defaults and defective growth estimates by the Office of Management and Budget, or OMB.

And it looks like annual deficits will exceed the trillion dollar level as soon as next year when projected spending is factored in.

With growth now fading after the Trump tax cut boost (there will be no tax cuts in 2019), the debt-to-GDP ratio is now up to 106%, since debt is growing faster than GDP.

As Grant points out, the national debt has registered compound annual growth of 8.8%, but only 6.3% for GDP. That’s not a sustainable situation. And it’s not at all clear that GDP will close the gap.

I don’t say that to be hyperbolic. I’m not looking to scare people. It’s just an honest assessment, based on the numbers.

When is the debt-to-GDP ratio too high? When does a country reach the point that it either turns things around or ends up like Greece?

They put the danger zone at a debt-to-GDP ratio of 90%. Once it reaches 90%, they found, a turning point arrives…

At that point, a dollar of debt yields less than a dollar of output. Debt becomes an actual drag on growth.

We are deep into the red zone, that is. And we’re only going deeper. The U.S. has a 106% debt to GDP ratio, trillion dollar deficits on the way, more spending on the way.

We’re getting more and more like Greece. We’re heading for a sovereign debt crisis. That’s not an opinion; it’s based on the numbers.

How do we get out of it?

For elites, there is really only one way out at this point is, and that’s inflation. And they’re right on one point. Tax cuts won’t do it, structural changes to the economy wouldn’t do it. Both would help if done properly, but the problem is simply far too large. Growth would have to greatly exceed current levels, and that’s just not in the cards.

There’s only one solution left, inflation.

Now, the Fed printed about $4 trillion over the past several years and we barely have had any inflation at all, even though it does appear to be percolating lately. Not enough to satisfy the Fed, but some inflation measures have been on the uptick.

The reason we didn’t have inflation all that time is because most of the new money was given by the Fed to the banks, who turned around and parked it on deposit at the Fed to gain interest. The money never made it out into the economy, where it would produce inflation.

The bottom line is that not even money printing really worked to get inflation moving. Is there anything left in the bag of tricks?

There is actually. The Fed could actually cause inflation in about 15 minutes if it used it. How?

The point is to cause a generalized increase in the price level. A rise in the price of gold from today’s roughly $1,230 per ounce to $5,000 per ounce is a massive devaluation of the dollar when measured in the quantity of gold that one dollar can buy.

Don’t think this is possible? It’s happened in the U.S. twice in the past 80 years. The first time was in 1933 when President Franklin Roosevelt ordered an increase in the gold price from $20.67 per ounce to $35.00 per ounce, nearly a 75% rise in the dollar price of gold.

He did this to break the deflation of the Great Depression, and it worked. The economy grew strongly from 1934-36.

I’m not saying it’s going to happen anytime soon, especially with inflation beginning to show up here and there.

But if it doesn’t prove sustainable and if we enter a deep recession at some point— which is very likely — the Fed could reach deep into its bag of tricks for the golden inflation cure.