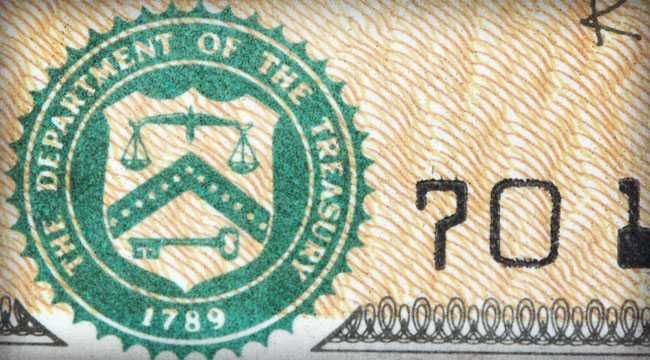 How many times have you heard the phrase “bond bubble” in the past three years?

It seems that every time you turn on financial television or go to a financial website, there’s an analyst warning you about a bond bubble about to burst. The commentary usually consists of the observation that “interest rates are near an all-time low” and “have nowhere to go but up.”

There’s not much more to the analysis than that. In fact, interest rates are near all-time highs and could drop significantly, setting off one of the greatest bond market rallies in history.

When the typical analyst talks about interest rates, they are looking at the nominal rate, or the rate you actually earn in interest payments when you buy the bond.

When we consider interest rates at we focus on the real interest rate, which is the nominal rate minus inflation.

It is true than nominal rates are quite low in historic terms. The coupon on the current 10-year Treasury note is 2.31%, and the yield-to-maturity is only slightly higher at current market prices. But recent inflation reports have shown negative inflation, technically deflation, which puts the real rate at about 3.0%, extremely high by historical standards.

Today’s real rate of 3.0% is five percentage points higher than the real rate in 1980! That’s what we mean when we say real rates are near all-time highs.

How low can rates go? We need look no further than Japan and Germany for the answer.

Those countries are advanced developed economies with deep liquid bond markets like the United States. Nominal interest rates in Japan and Germany have been in a range from negative 0.5% to positive 0.5% for months.

Since bond prices move inversely to bond yields, a two-percentage point drop in U.S. nominal rates from current levels would be one of the most dramatic bond market rallies in history.

We got a taste of this in the Oct. 15, 2014 “flash crash” in bond yields, when bond prices skyrocketed in a matter of minutes. Even if the next rally played out over weeks, rather than minutes, the capital gains on Treasury notes could be huge.

What is the catalyst for such a bond market rally? According to the proprietary indications and warnings that I use in my analysis, there are two catalysts on the horizon: recession and a geopolitical shock.

It seems extreme to discuss a new recession when it seems we’ve barely had a recovery from the last one. That’s because the recovery has been so weak. But this recovery is now 72 months old, which is much longer than the average recovery since the end of World War II, and long even by the standard of the stronger recoveries since 1982.

But just because the recovery is long doesn’t mean it can’t get longer. Still, the data are flashing recession warning signs. Job creation peaked last November. Retail sales have disappointed four of the last five months.

GDP will probably be negative in the first quarter of 2015, when the revisions are announced later this month. And the Atlanta Fed real-time GDP tracker (shown below) for the second quarter shows that growth is barely positive and trending downward.

These kinds of weak and declining growth and borderline recessionary conditions are completely inconsistent with real interest rates of 3.0%. In fact, that sky-high real rate is one of the reasons growth is so weak.

Since the Fed cannot stimulate by cutting rates that are already at zero, the bond market will have to do the Fed’s job for it.

Then there is the possibility of a geopolitical shock that would send global investors running into the U.S. Treasury market in a flight to safety.

After the failure of President Obama to observe his own “red line” in Syria in 2012, dictators in Russia and China perceived the U.S. as weak and decided to test the United States in other areas.

Russia invaded Crimea in 2014 and has supported a separatist movement in eastern Ukraine ever since. China has expanded its territorial claims in the South China Sea and has been backing up those claims by building artificial islands and installing oil rigs.

Ukraine and the South China Sea are like geopolitical bookends in the Eurasian landmass. Confrontation will test U.S. military alliances with NATO and the Philippines.

Whether a war breaks out remains to be seen, but tensions are increasing and the likelihood of some direct military confrontation is high.

Given the current high level of U.S. real interest rates, either a recession or a geopolitical flare-up would be enough to trigger a bond market rally. The possibility of both happening in the next six months cannot be ruled out.