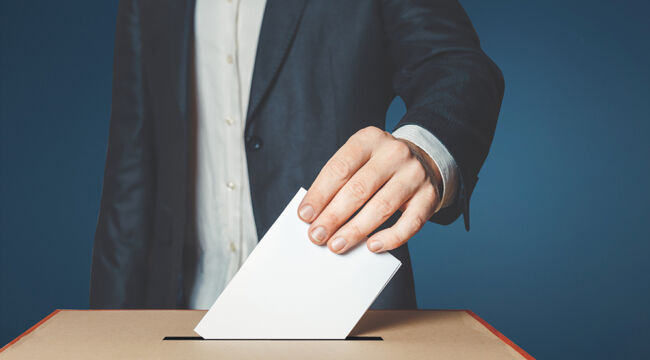 The Tragedy of Democratic Politics

The “most important election in our lifetimes” is but five days distant.

Thus the Republic’s very fate dangles in the balance… we are warned.

Good vs. evil, light vs. darkness, democracy vs. fascism — these are the life-and-death combats before us.

You must therefore take to the polls next week, and vote.

Perhaps there is justice here. Perhaps the nation perches truly and precariously upon the devil’s shovel.

And we concede it at once: Our ruthless anti-partisanship has faced severe trial of late. And we have a tort or two to file against the reigning party.

Why must a man’s fortunes be tied to politics and all its rages? Why should politics bulk so large in his existence?

Today we revisit a subject about which we have reckoned before: the superiority of markets over politics.

Politics Besieges Us All

It is true, no man can avoid politics. All are in siege.

No rival field of human enterprise approaches politics’ ferocity. War is the extension of what by other means… in Mr. Carl von Clausewitz’s grim telling?

The answer of course is politics.

Democratic politics offer no exception. They in fact constitute the very proof of the rule. Assume a democratic election…

Each candidate is little more in this world than a liar, jackleg and rogue.

Yet this human sculch appears before the voters, hopeful of election.

Both roar their flubdubberies before eager and attentive crowds. Both shout their propagandas and thump their chests.

Each denounces the other as a very arm of Satan. Amazingly, both are often correct. Come the election…

Thus X claims the laurel. He proceeds instantly against the desires, hopes and interests of the vanquished 49.9%.

Each day they live they cringe, wither and chafe beneath X’s atrocities… helpless as worms on fishermen’s hooks.

See — for example — the past two years of Democratic jammings down unreceptive and protesting non-Democratic throats.

Only upon some distant November can voters heave this jackal out. This, happily, is one such November. Assume voters do heave him out…

X’s voters must then endure their own parallel hells until the following election.

The same pitiful calculus applies to elections at any level of American government… down to canine-catcher.

The higher the office… the greater the menace.

Yet these victims are free to jump the fence.

The bordering hamlet might run to saner and more tolerable settings as the outvoted sees them. And so the oppressed can flee, refugees from oppression.

The same asylum-seeking applies to states.

Has a California or an Oregon or an Illinois gone lunatic? For many they have. But a Texas or a Tennessee or a Utah holds out its beacon.

These local competitions form a severe brake on the natural rascalities of politics, especially in the American system.

These local competitions, in fact, form the crowning glory of the American device of government.

But to escape a president? A fellow must jump the Rio Grande to the south, the 49th parallel to the north or cross oceans east and west to get away.

If he chooses to linger on, he must rot down four years until he takes another go at the vote booth.

Our poor wretch must endure another four years under occupation — for a total of eight.

Let us once again present a parallel case to our previous electoral bout, our political bout…

A Coca-Cola holds itself out before the American people, for example. It is Candidate X in our market race.

“Vote for me,” yells this candidate. I’m the “real thing.”

Behind another podium stands a Pepsi-Cola — Candidate Y.

The fickle and capricious voter proceeds to choose. Out comes his wallet, containing his vote for the one or the other.

Yet does his individual vote injure, usurp or ruffle the opposing voter? Does he club the other voter over the head to enforce his wishes… as he does in politics?

A voter for either Coca-Cola or Pepsi-Cola is a satisfied voter. Crucially, neither would deny the other his soft drink of choice.

Multiply this one example countless times and in countless directions. What emerges is a picture of majestic electoral peace and serenity.

And if voters decline both offerings, each plunges into bankruptcy… and goes away.

In this instance the voter has also delivered his message, and thunderously. Do electoral politics grant him such power?

A vote for any of them is peaceful as a dove. The voter on the free and open market holds no gun against any ribs.

Yet when he steps into the vote booth on Election Day— conversely — the gun goes against the ribs.

But neither attempts to dragoon or bayonet the other. Each concedes the other’s freedom to vote his own way, as he might, unhindered.

They will fall into savage combat, Hatfield versus McCoy.

That is because the loser understands he must endure his sufferings for the following two years, four years or six years.

A vote in the marketplace is a “win, win” deal, as our co-founder Bill Bonner styles it. Both the purchaser and the producer gain from the transaction.

What is more, market voting improves the world in ways large and small…

On the unimpeded market each business must compete for the consumer’s vote. That vote injures no one and menaces no one — as we have established.

If a business fails the market’s harsh and ruthless voting, the voters may yank its candidacy altogether. It goes the way of the Whigs.

Yet here is perhaps politics’ greatest crime, its most scarlet of sins:

That is, politics has stripped society’s power and liberty… and placed them in the state’s hands.

Albert Jay Nock, dates 1870–1945, was a gentleman and thinker of deep and penetrating insight.

Nock sobbed about the loss of social power during the New Deal:

Every assumption of State power, whether by gift or seizure, leaves society with so much less power. There is never, nor can there be, any strengthening of State power without a corresponding and roughly equivalent depletion of social power…

As the frog in its pot acquiesces to the gradually warming water… the citizen has acquiesced to his gradual loss of social power:

New generations appear, each temperamentally adjusted — or as I believe our American glossary now has it, “conditioned” — to new increments of State power, and they tend to take the process of continuous accumulation as quite in order.

The lingering vestiges of social power are in the state’s sights. And many voters, it appears, are hot to sign these away.

No — not earnestly. We merely diagnose a disorder. We do not prescribe a fix.

We have previously held out the relative virtues of monarchy. But this we did largely to take razzes at cherished democratic theories and their silly drummers.

We certainly do not expect — nor do we propose — a return to monarchy.

You say the system under which we wallow is the best on offer in this fallen world of sin and evil. Let us not make the perfect the enemy of the good.

Just so. You may very well be correct. You are very likely correct.

Yet as old Ben Franklin never said: Democracy is two wolves and one sheep voting — voting on which will appear upon the lunch plate.

What if you are the lamb?