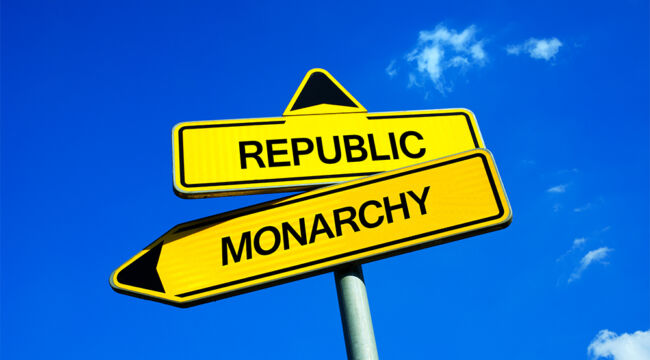 Today we trample sacred ground… trumpet a message of heresy… and offend the pieties. For we challenge the cherished and soothing assumptions of democracy.

In 2001, academic Hans-Hermann Hoppe scribbled a book bearing the soaring title Democracy: The God That Failed. Hoppe’s work is a dart leveled against that holiest of secular divinities.

It wastes. It exhausts its capital. It forever takes the short view. Hoppe uses the economic concept of time preference to nail his point through.

A Jill with low time preference delays her gratification until the future. She is disciplined. She is willing to have her cake later — only after she has tended to her duties.

But a Jack with high time preference orients toward present consumption. He wants his cake now — and the future can go scratching.

Democracy, in Hoppe’s regard, “wants it now.” It is a spendthrift, a profligate, a child at large in a candy store.

As the drunkard cannot see beyond the next drink… democracy cannot see past the next election.

The problem, says Hoppe, is that democratic leaders do not own the machinery of government. It is theirs on temporary loan. Thus the democratic politician is a mere placeholder.

But is that not our system’s cardinal virtue — that power is not permanently lodged in a single vessel? A rotating roster of rogues is far superior to one alone, you counter.

Otherwise, the American Revolution was a vast swindle, and the Fourth of July is a blackguard’s holiday.

A Prearranged Raid on the Treasury

But because a leader under democracy does not own the government apparatus, argues Hoppe, he has no incentive to maximize its value. Instead, he tends to deplete it. His limited time horizon forces him toward immediate gratification.

That is, he must get while the getting is there to be gotten.

Consider the aspiring democratic official who seeks the franchise of a demanding public.

He may feel the tug of fiscal conscience. But should he fail to gratify the crowd’s clamorings, he knows the other fellow will. And our democratic aspirant will lose his election.

So he offers up the requisite sweets.

If Social Security benefits must increase to sweep him into office, they will increase. Will it take more Medicare benefits, more unemployment insurance, more welfare? Then these you will see.

His election represents a prearranged raid upon the Treasury. If the national purse is thin, if the burden cannot be met from existing stocks, then let it go upon the credit card.

Is the business sordid? Might it eventually throw the Republic into bankruptcy?

Well, eventually is a long way off, he says. Let it fall into the next fellow’s lap. Besides, we’ll simply grow our way out of it.

This is the office-seeker under modern democracy.

Compare, for a moment, democratic government with a rented automobile…

Who Ever Washed a Rental Car?

The renter does not own the auto. He, therefore, has no regard for its long-term health. So he over-accelerates the engine. He pummels the brakes. Down its gullet, he pours the lowest-test gasoline. Would he ever check the oil?

And who, may we inquire, has ever run a rental through a wash?

It must be regarded as unavoidable that public-government ownership results in continual capital consumption. Instead of maintaining or even enhancing the value of the government estate, as a king would do, a president (the government’s temporary caretaker or trustee) will use up as much of the government resources as quickly as possible, for what he does not consume now, he may never be able to consume… For a president, unlike for a king, moderation offers only disadvantages.

Hoppe speaks of a king.

Unlike democracy, Hoppe contends, monarchy takes the long view. The monarch owns the apparatus of government. As will his heirs. So he naturally inclines to policies that increase the value of his property over time.

If Social Security, Medicare and the rest begin to deplete the government’s stocks, the monarch will announce a halt to them.

“It’s welfare you want, subject? I understand the church runs a charity.

“Social Security, you seek? I suggest you begin planning early for your retirement. And remember to save against the rainy day.

“You say you want health care? I hope you don’t smoke or drink too much. And let me mention it now — sugar is a far-from-healthful substance. Besides, there are private insurers. I can refer you to several if you wish.”

The People Tell the King to Get Bent

Is such a system undemocratic? Certainly.

Callous, perhaps? Well, perhaps it is.

But is it fiscally stable? Yes.

In brief, monarchy may be better with money than democracy. It is a superior steward of wealth — at least by this theory.

While a king is by no means opposed to debt, he is constrained in this “natural” inclination by the fact that as the government’s private owner, he and his heirs are considered personally liable for the payment of all government debts (he can literally go bankrupt, or be forced by creditors to liquidate government assets).

Consider, as one example:

In 1392, England’s Richard II was in arrears to the Pope in Rome… and required 1,000 pounds toward satisfaction of his debt. He did not have it.

So old Rich appeared before the citizens of London with an open hat.

Moreover, they refused him. Imagine it!

Freeman Tilden, from his neglected 1936 masterwork A World in Debt:

Kings had power enough to contract debts, but found it much more difficult to take advantage of that power… The feudal system, with its insecurity and constant clash of petty divisions, was not calculated to invite credit.

In distinct contrast, Hoppe argues, we find the democratic president:

A presidential government caretaker is not held liable for debts incurred during his tenure of office. Rather, his debts are considered “public,” to be repaid by future (equally nonliable) governments.

Perhaps this explains — pandemic aside — why the national debt of the United States runs to some $31 trillion?

It is a capital fact beyond all dispute:

How does this lovely, lovely state compare with the barbarous age of monarchs, Mr. Hoppe?

During the entire monarchical age until the second half of the 19th century… the tax burden rarely exceeded 5% of national product. Since then it has increased constantly. In Western Europe it stood at 15–20% of national product after World War I, and in the meantime it has risen to around 50%.

Government spending ran to roughly 10% of GDP prior to World War I. It currently nears 50% in many democratic countries.

Total government spending in this Land of the Free amounts to 36% of GDP — nearly 40%.

Perhaps in retrospect, the world might have been made safe for monarchy in 1917.

And maybe our Colonial forefathers should have left old King George alone in 1775. His tax bite was so light… it failed to break the skin.

Our researches reveal that American Colonial taxation ran to about 1% of total income — 1%.

And between 1764 and 1775, claims political scientist Alvin Rabushka:

The nearly 2 million white Colonists in America paid on the order of about 1% of the annual taxes levied on the roughly 8.5 million residents of Britain, or 1/25th, in per capita terms…

As traitorous as it may appear, we are half-tempted to disinter King George’s innocent bones and throw them a much overdue parade.

But let us entertain no more thoughts of heresy.

The Worst System of Government… Except for the Rest

Hoppe’s book is actually no call for monarchy. As the author himself states at the onset — “I am not a monarchist and the following is not a defense of monarchy.”

His primary purpose is to diagnose an illness — not to prescribe a cure.

Hoppe’s sins against democracy are nonetheless of the mortal variety. And mainstream academics put him under excommunication for his blasphemies.

But to repeat, Hoppe does not call for monarchy. Nor do we.

Beneath our seditious motley beats the heart of an American patriot… and our blood runs true under red, white and blue.

Besides, a king could be every inch the scoundrel as an American president. And since he faces no election, how could we possibly count upon him to say amusing and idiotic things?

Let us, therefore, not discount the comedic value of democratic government.

In addition, monarchy is certainly no guarantee against bankruptcy — as history records well. More than a few ne’er-do-well kings have driven their realms to rack and ruin. Who can dispute it?

But it is due more to incompetent kingmanship than kingmanship itself. A rascally Henry VIII can inherit a throne as easily as a wise Solomon. Regardless, it matters little…

Hoppe’s monarchic realm will never exist — not in today’s age of mass democracy.

But does it soften his case?

Winston Churchill famously quipped that democracy was the worst form of government except for the rest.

But upon further reflection, perhaps monarchy is the worst form of government… except for the rest…