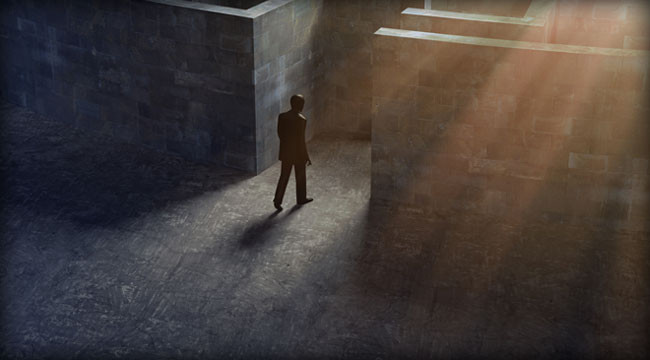 The "Small" Solution to a Big Tax Problem

If the government levies taxes on landowners, retailers, corporations, and individuals, it is far from certain that the targeted interest groups will actually pay the tax. Depending on a variety of factors, they may be able to roll over or shift the tax to other people (tenants, consumers, workers, etc.) either partly or entirely. As Alfred Marshall said: “There is scarcely any economic principle which cannot be aptly illustrated by a discussion of the shifting of the effects of some taxes.”

The Swedish Nobel Laureate, economist, sociologist, and politician Karl Gunmar Myrdal also contended that the results of taxes can “diverge greatly” from the intentions. (All government interventions in free markets lead to unintended consequences.) This was already obvious to David Ricardo, who commented: “Almost all taxes on production fall finally on the consumer.”

Another issue relates to what percentage of total revenues a government should collect from indirect taxes (sales taxes, taxes on tobacco, gambling, alcohol, gasoline, all kinds of transaction taxes, and import duties), which tend to be somewhat regressive, and how much it should raise through direct taxes (income, capital gains, property taxes, etc.). This is an issue that preoccupied John Stuart Mill, whose view was: “The very reason which makes direct taxation disagreeable, makes it preferable…. If all taxes were direct, taxation would be much more perceived than at present; and there would be a security which now there is not, for economy in the public expenditure”.

This is an excellent point. If every American had only to pay income taxes and the government collected no revenues from indirect taxes, which are less visible to people, there would likely be a revolution, because Americans would suddenly realise how much tax they were paying (my guess is around 25% of their income) for a government that is incapable of achieving any meaningful military successes abroad, that is failing to successfully implement a healthcare website for which it has already paid US$600 million, and which cannot provide a school system to which people are happy to entrust their children’s education.

However, by far the largest issue I have with PIMCO’s Bill Gross’s proposal to increase capital gains taxes (which I discussed in my essay “The World’s Only Popular Tax”) is that I oppose higher taxes under any circumstances because higher taxes allow the government to expand and, in the process of expanding, to retard economic growth and curtail individual freedom. Bob Hoye recently sent out a missive highlighting the difference between the expansion of the Fed’s balance sheet during the Second World War and since 2009. 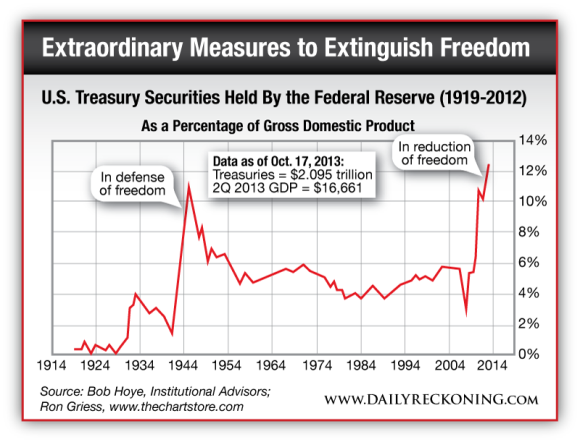 According to Hoye, extraordinary funding measures between 1940 and 1944 were justifiable because “World War II was prosecuted in the defense of freedom”, whereas the recent increase “has been to fund the expansion of the state for the state itself” and “ironically, this has been part of a relentless attempt to extinguish freedom”.

But aside from this, we are all aware of how dysfunctional and wasteful the US government is. In some European countries, the situation is not much better or is even worse. Does anyone really want to give the government more money with which to wage additional senseless and extremely costly wars, and to distribute even more food stamps, and to allow even more people to receive disability benefits? 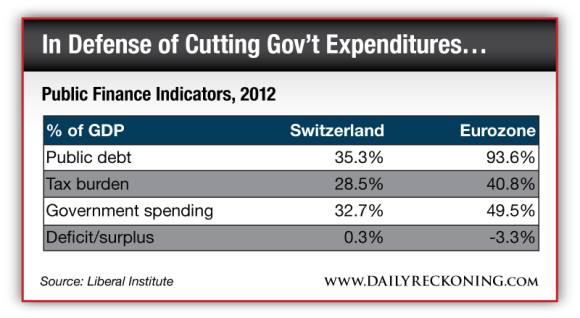 As a percentage of all households, Switzerland also has a far higher number of millionaires than the US . I concede that it is natural for small low-tax countries or city-states with a high degree of freedom and good infrastructure to attract a large number of wealthy people. 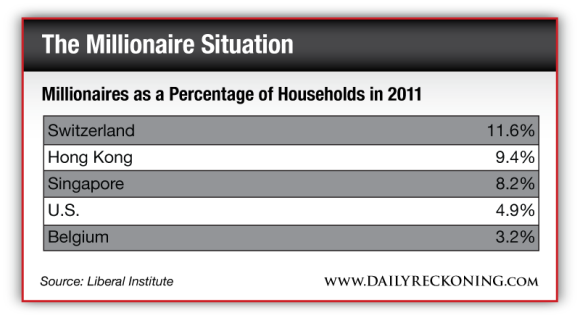 Lastly, income inequality as measured by the so-called “Gini coefficient” is relatively low in Switzerland. I am not singling out Switzerland because I am Swiss, but because I wish to show that we may have to look not just at tax rates but also at other factors in order to explain high income and wealth inequality.

I do concede, however, that income inequality is low in the high-tax regimes of the European Nordic countries and high in the low-tax regimes of Hong Kong and Singapore.

I mentioned that I would always be in favour of lower taxes and lower government spending. However, I have sympathy with the economic and social system in Nordic countries, where people contribute to the government a large portion of their income but also get in return first- class schools, healthcare facilities, and other social benefits. Friedrich Hayek explained in The Road to Serfdom that the world would be a better place if it consisted of smaller nations. My friend, the economist Jim Walker , recently drew my attention to Hayek’s comment in his book:

We shall not rebuild civilisation on a large scale. It is no accident that on the whole there was more beauty and decency to be found in the life of small peoples, and that among the large ones there was more happiness and content in proportion as they had avoided the deadly blight of centralisation. Least of all shall we preserve democracy or foster its growth if all the power and most of the important decisions rest with an organisation far too big for the common man to survey or comprehend.

Nowhere has democracy ever worked well without a great measure of local self-government, providing a school of political training for the people at large as much as for their future leaders. It is only where responsibility can be learnt and practised in affairs with which most people are familiar, where it is the awareness of one’s neighbour rather than some theoretical knowledge of the needs of other people which guides action, that the ordinary man can take a real part in public affairs because they concern the world he knows.

Where the scope of the political measures becomes so large that the necessary knowledge is almost exclusively possessed by the bureaucracy, the creative impulses of the private person must flag. I believe that here the experience of the small countries like Holland and Switzerland contains much from which even the most fortunate larger countries like Great Britain can learn. We shall all be the gainers if we can create a world fit for small states to live in.

Heinz Blasnik, a leading expert on Austrian Economics, supplied another Hayek thought from the same book, which relates to a change in moral values that is brought about by the advance of collectivism. According to Hayek,

There is one aspect of the change in moral values brought about by the advance of collectivism which at the present time provides special food for thought. It is that the virtues which are held less and less in esteem and which consequently become rarer are precisely those on which the British people justly prided themselves and in which they were generally agreed to excel. The virtues possessed by Anglo-Saxons in a higher degree than most other people, excepting only a few of the smaller nations, like the Swiss and the Dutch, were independence and self-reliance, individual initiative and local responsibility, the successful reliance on voluntary activity, noninterference with one’s neighbor and tolerance of the different and queer, respect for custom and tradition, and a healthy suspicion of power and authority.

The point is that what may work in terms of state involvement in small societies such as the Nordic countries, which are in nature more like country clubs where the members share a common interest and pride themselves on maintaining the club in perfect condition, is unlikely to work in population-rich countries where different interest groups are eager to benefit at the expense of someone else. I should add that these “Country Club Nordic Societies” are likely to change in the years ahead as immigrants from Eastern Europe and Africa settle there in order to take advantage of the generous social benefits and high educational standards.

The high wealth and income inequality in Hong Kong and Singapore is undesirable but needs to be understood in the following context. Because of their low taxes and high degree of freedom, both cities have attracted wealthy people from all over the world, which explains the high number of millionaires in these cities.

Furthermore, the expansionary US monetary policies created colossal asset bubbles in these two cities’ high-end real estate markets (this applies particularly to Hong Kong, whose currency is pegged to the US dollar) and is much in line with record high art, precision watch, wine, and diamond prices for the highest-quality pieces.

But the difference between the wealth and income inequality in Singapore and Hong Kong, and that in the US, is that most people in these two cities (the so-called 90%) enjoy better living conditions than 15 years ago and their net worth has appreciated, whereas in the US this is not the case.

Ed. Note: It’s too late for the U.S. to go with a “small is better” approach to socio-economic reform. Of course, that doesn’t mean it’s doomed to failure. It just means that you have to be more careful of how you manage your money, and more diligent in where you decide to invest. That’s where The Daily Reckoning comes in… The free email edition of The Daily Reckoning comes complete with several chances (no less than 3) to discover real, actionable advice from some of the most respected names in the investment world. And it gets delivered, for FREE, straight to your inbox every afternoon. Bottom Line: If you’re not getting The Daily Reckoning email edition, you’re only getting half the story. Sign up for FREE, right here.