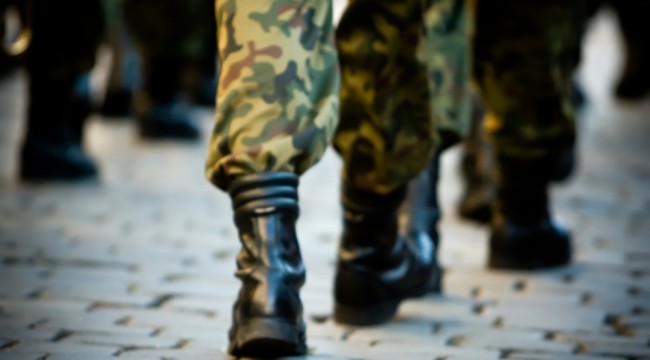 The Slow March to Ruin

As many as 50,000 stray dogs roam the streets and vacant homes of bankrupt Detroit, replacing residents, menacing humans who remain, and overwhelming the city’s ability to find them homes or peaceful deaths.

They are among the victims of a historic financial and political collapse.

Detroit, a former auto-manufacturing powerhouse, declared the largest U.S. municipal bankruptcy on July 18, after years of decline. The city had more than $18 billion in long-term debt and had piled up an operating deficit of close to $400 million. Falling revenue forced cutbacks in police, firefighting… and dog control.

Gradually, in imperceptible baby steps, what was once preposterous and odious becomes normal and acceptable.

Hey. Dogs don’t vote. They don’t make campaign contributions. They don’t have any lobbyists in Washington. To hell with them.

You don’t find Department of Defense staffers wandering the empty slums of a bankrupt city.

Witness one of the wonders of modern imperial democracy. In its effort to enrich the defense industry, not only is the U.S. free to engage in all the “wars of choice” it chooses, but it also is free to choose which side it supports. Minding its own business seems to be out of the question.

So in Egypt, the U.S. is free to choose. Will it go for those who claim to represent the forces of democracy, light, justice, and progress? Or will it throw its immense weight behind the side that promises law, order, and a reliable treaty with Israel?

Frankly, we don’t give a damn. But we will let dear readers get exercised on the issue, if they choose.

Here is The Wall Street Journal, naturally, telling its readers that it is “Time to Choose Sides in Egypt.”

And here is John Bolton arguing, naturally, for a policy of unrestraint:

“Discrete crises in collapsing Middle Eastern and African countries are giving way to broader regional chaos, which is now a geostrategic factor…”

Is there a bigger jackass than John Bolton?

He makes no mention of his own role in causing the regional chaos in the Middle East. He was a major warmonger — arguing for the invasion of Iraq, which is now on track to cost the U.S. more than $5 trillion. And who gained? Only Islamic terrorists… and the defense industry.

Now Bolton says we should go into Egypt on the side of the military.

He doesn’t like the Muslim Brotherhood. How many brothers has he met? We don’t know, but he gives the impression that he thinks they are bad people.

Facing off against him in the Journal is Elliott Abrams. We couldn’t make much sense of Mr. Abrams’ argument other than that he thinks the military rulers are bad people. We were going to quote a passage of it for you, but we couldn’t find anything worth retyping.

Several editorials urge the U.S. to back the Muslim Brotherhood in Egypt, as one put it, if we are really “believers in democracy.”

Well, that leaves us out!

What’s really interesting is how the defense industry, the meddlers, and the warmongers have put themselves in a winning situation.

Nobody knows which side God is on. Nobody knows what will happen if one side wins or the other loses. All we know with reasonable certainty is that the more meddling we do in the affairs of others, the more enemies we make… and the more of the national treasure is transferred to the zombies in the defense industry.

But that’s how it goes. Gradually, in imperceptible baby steps, what was once preposterous and odious becomes normal and acceptable. And then you wake up and realize that things have gone too far… and there’s no turning back.

Here’s something to chew over from They Thought They Were Free, by Milton Mayer, in which Germans recall how life changed, little by little, from 1933-45:

“To live in this process is absolutely not to be able to notice it — please try to believe me — unless one has a much greater degree of political awareness, acuity, than most of us had ever had occasion to develop.

“Each step was so small, so inconsequential, so well explained, or, on occasion, ‘regretted,’ that, unless one were detached from the whole process from the beginning, unless one understood what the whole thing was in principle, what all these ‘little measures’ that no ‘patriotic German’ could resent must someday lead to, one no more saw it developing from day to day than a farmer in his field sees the corn growing. One day it is over his head.”

Americans are already in it way over their heads.

Ed. Note: Even though many Americans are “in it way over their heads” as Bill points out, there are a few who’ve made it their mission to see above the crowds. And you can stand on their shoulders. Sign up for the Laissez Faire Today email edition to learn how.