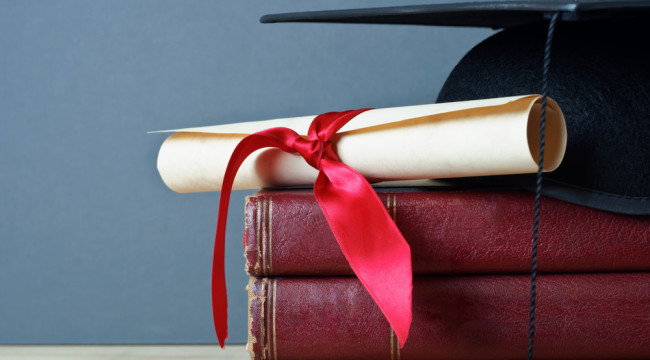 Everyone understands soaring student debt is a problem: burdened with $1.3 trillion in student loans, young people are unable to start businesses, buy homes and start families. The high cost of housing and meeting regulations to launch businesses add additional burdens, but the weight of $1.3 trillion in debt right out of the starting gate is crushing.

The “solution” being pursued by the federal government is obvious: take over most of the student debt and then eventually bury it in the zombie-loan graveyard (i.e. defaults are ignored but the debt isn’t officially written off), write it down via forgiveness programs, or some other mechanism to reduce the burden.

If this wasn’t the plan, then why has federal ownership of student loan debt skyrocketed from zero to $900 million in a few short years? 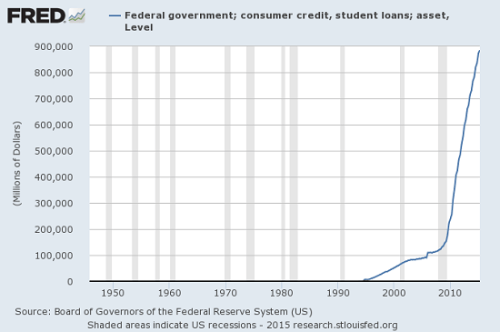 This is a decades-old problem that’s finally reaching critical mass: student debt has leaped from less than $500 billion in 2006 to $1.3 trillion today, a mere 9 years later: 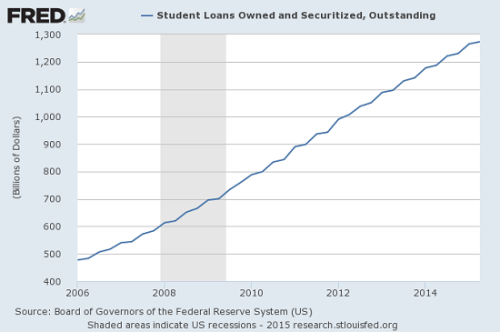 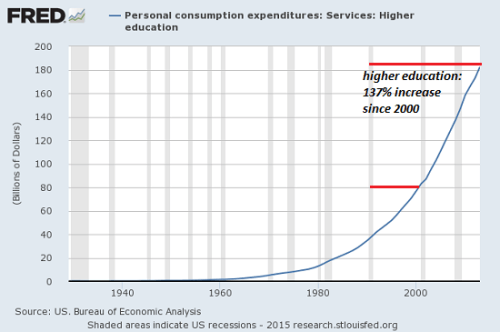 Apologists claim the student-loan crisis is the result of underfunding of colleges by states. While it’s true that some of the cost burden has been shifted from taxpayers to students, the real problem is soaring costs of the higher education cartel, which fixes prices via the artifical scarcity of accreditation.

The extraordinary rise in administrative staffing and costs and the boom in building costly temples of higher education are well-known. This chart depicts the rise of the educrat class, at the expense of teachers/professors: 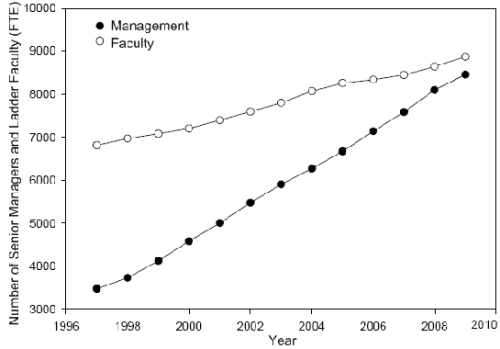 I cover the rise in costs and the the equally extraordinary failure of the higher education cartel to prepare students for work in the emerging economy in my book The Nearly Free University and the Emerging Economy: The Revolution in Higher Education.

So the problem is two-fold: it isn’t just the insane cost of higher education that’s the issue; the cartel is failing to prepare students for an economy that requires the 8 essential skills in addition to whatever technical skills are needed in a particular field.

Consider the study Academically Adrift: Limited Learning on College Campuses which concluded that “American higher education is characterized by limited or no learning for a large proportion of students.”

In all, from 1987 until 2011-12–the most recent academic year for which comparable figures are available—universities and colleges collectively added 517,636 administrators and professional employees, according to the analysis by the New England Center for Investigative Reporting.

“There’s just a mind-boggling amount of money per student that’s being spent on administration,” said Andrew Gillen, a senior researcher at the institutes. “It raises a question of priorities.”

The number of employees in central system offices has increased six-fold since 1987, and the number of administrators in them by a factor of more than 34.

Paying a bloated institution for the privilege of sitting through four years of lectures, online courses and a few labs no longer makes sense for the vast majority of students. What makes sense is dispensing with the entire bureaucracy of the cartel and costly campuses altogether, and designing directed apprenticeships which combine the best of online coursework with on-the-job training in workplaces.

The top research universities (numbering around 125 out of thousands of colleges and universities) can continue to train the relatively small cadre of academics and researchers the economy can support. (Just issuing STEM (science, technology, engineering, math) degrees doesn’t magically create jobs for the graduates.)

The vast majority of student are better served by mastering the 8 essential skills required in the emerging economy–skills that students can acquire on their own, a process of accrediting yourself that I address in detail in Get a Job, Build a Real Career and Defy a Bewildering Economy.

Forgiving skyrocketing student debt won’t solve the real problem which is the soaring costs imposed by a cartel that is failing to prepare students for the economy of tomorrow.