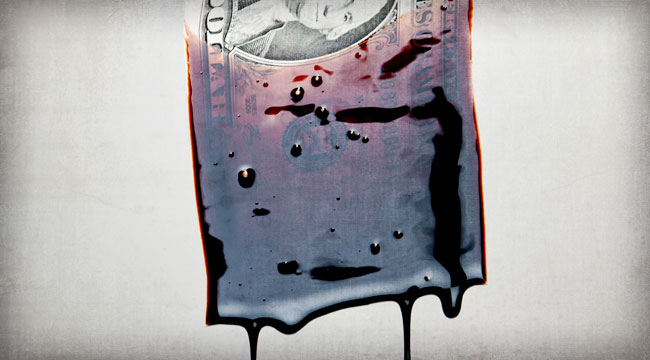 The Power Play to Eliminate the Petrodollar

Anthropology isn’t the profession that springs to mind when wondering how to turn a buck in the financial markets. But the marauding armies of antiquity may tell you more about the shifting Saudi-US alliance than you can read about in The Wall Street Journal. The petrodollar standard couldn’t exist, after all, without the example of Rome.

…it’s like the Jones family took over Texas and started calling it Jones’ Texas.

Throughout history, cash markets – money itself – arose through war. This is linked to the premise that it is credit, not money, which is the main constant in human affairs. We wish we could lay claim to this idea, but it’s not ours. It belongs to David Graeber, an anthropologist, who wrote the intriguing book Debt: The First 5000 Years:

“Say a king wishes to support a standing army of 50,000 men. Under ancient or medieval conditions, feeding such a force was an enormous problem… On the other hand, if one simply hands out coins to soldiers and then demands that every family in the kingdom was obliged to pay one of those coins back to you [to pay taxes], one would, in one blow, turn one’s entire national economy into a vast machine for the provisioning of soldiers, since now every family, in order to get their hands on the coins, must find some way to contribute to the general effort to provide soldiers with the things they want.”

One of the themes of Debt is that the history of the world can be broken into yin and yang periods of dominance between credit style economies and bullion/cash ones. Money springs up, Graeber argues, in periods of generalised violence.

“For much of human history, then, an ingot of gold and silver, stamped or not, has served the same role as the contemporary drug dealer’s suitcase full of unmarked bills: an object without a history, valuable because one knows it will be accepted in exchange for other goods just about anywhere, no questions asked.”

Graeber says money as we know it today came into existence first and foremost through tax and tribute policies. These were designed to provision soldiers and finance the warmongering of different States. Fast forward to today. Graeber speculates it’s no coincidence that, with the exception of China, most of the US federal debt is in the hands of countries that are protectorates of the US military. This leads him to the question of whether these are loans at all, or what they look like: tribute to the muscle of Empire, like the barbarians sent to Caesar.

No one has benefited more from this muscle than the House of Saud. The Saudi Royal family is essentially backed by the US military, or at least by arms sold to the Royal family by the American military industrial complex.

Go back to early maps of the area and it’s called Arabia. The ‘Saud’ comes from Ibn Saud, the father of the modern nation you might say. As analyst Richard Maybury likes to say, it’s like the Jones family took over Texas and started calling it Jones’ Texas.

It’s not a complicated arrangement. US muscle keeps the Saudi monarchy in power. In return, the Saudis price oil in US dollars. Pricing oil in dollars reinforces the dollar’s status as the reserve currency of the world. This arrangement has pleased both sides for the last 50 years, although it may be less pleasing to countries that must buy dollars in order to buy oil from Saudi Arabia.

But the arrangement may be ending. Currency Wars author and analyst James Rickards, one of the key note speakers at our upcoming World War D conference, pointed out in December that “The petrodollar system is collapsing for two reasons. The US has abused its privileged reserve currency position by printing trillions of dollars in an effort to create inflation.”

“More recently,” Rickards continues, “President Obama has taken steps to anoint Iran as the regional hegemon of the Middle East, and to ease the way, in stages, toward Iran’s possession of nuclear weapons capability. This is viewed as a stab-in-the-back by the Saudis and the Israelis and will lead quickly to Saudi Arabia obtaining nuclear weapons from Pakistan.”

Maybe it won’t be long before we’re all talking about the petroyuan.

In other words, a 50-year status quo in the world’s most dangerous region with the world’s largest proven oil reserves is coming unstuck because of US monetary policy. Rickards writes that, “There is also a newly emerging alliance among Saudi Arabia, Israel, Egypt, and Russia. The new alignment will have no particular use for US dollars and no reason to support them. This turn of events marks the beginning of a significant diminution in the role of the dollar in the international monetary system.”

A key fact at play here is that China is now the largest importer of oil in the world. When the Saudis go looking for a new security patron, they won’t have to look far. Maybe it won’t be long before we’re all talking about the petroyuan.

China’s currency is rising in trade finance too, according to global transaction services organization SWIFT. With an 8.66% market share it’s not quite up there with the dollar at 81.08%, but the trend looks up from here as China’s economic power grows.

And if the economic power grows, so will China’s military power. At the Third Plenum recently, the Chinese Communist Party made no secret that defense spending is a priority for the regime. Byron King, who will also be speaking at World War D next week, has written in these pages that China is flexing its muscle in the Pacific and will continue to do so.

He says the government of China formally establishing the ‘East China Sea Air Defense Identification Zone’ (ADIZ) to cover the Diaoyu/Senkaku islands… and the recent annexation of Crimea are meaningful and powerful signals of a major geopolitical shift. The long version will no doubt get fleshed out at World War D. The short version is the next arms race has begun.

Callum Newman
for The Daily Reckoning

Ed. Note: For an even better understanding of the global financial system, and how you can parlay that into huge gains for your portfolio, sign up for the FREE Daily Reckoning email edition. Every issue comes packed full of insightful commentary and analysis, as well as regular opportunities to discover real, actionable stock picks. Sign up for FREE, right here, and start getting the whole story.