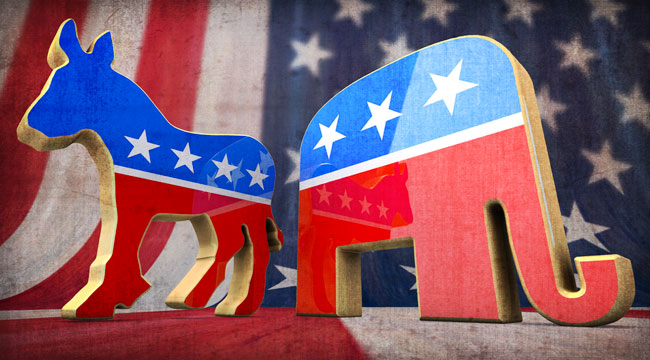 One Thing Liberals and Conservatives Can Agree On

Just shy of a decade ago, a retired rector named George Regas stepped into the pulpit at All Saints Episcopal Church in Pasadena, California, a few days before the November election and let fly with some good, old-fashioned fire and brimstone. The targets of his passion: President George W. Bush and the war in Iraq. Also, “conservative politicians.” Not to mention “the religious right.”

Regas described war as “the most extreme form of terrorism.” Speaking in the voice of Jesus Christ, he said, “The killing of innocent people to achieve some desired goal is morally repudiated by anyone claiming to follow Me as their savior and guide.” He went on to condemn poverty, defend abortion rights, and so on.

What happened next will surprise you only if you just fell off a turnip truck: The IRS came knocking. It threatened the church’s tax-exempt status, demanded all kinds of paperwork, and carried on an investigation that lasted more than two years — and cost the church $200,000.

The saga of All Saints could soon be coming to a community near you. Thanks partly to the scandal surrounding the IRS’ targeting of conservative groups, the agency has proposed a new set of rules for a huge number of social-welfare groups that claim tax exemption under Section 501(c)4 of the tax code.

Do liberals really want it to take control of an IRS that has been so dangerously weaponized?

That includes groups such as the Sierra Club, the Brady Campaign to Prevent Gun Violence, the League of Conservation Voters, and the Alliance for Justice (a coalition of more than 100 liberal organizations). It also includes many conservative groups, from Karl Rove’s Crossroads GPS to grassroots tea party groups — the ones the IRS scrutinized by demanding, e.g., old fundraising letters and all Facebook posts.

Under a finding that dates back to 1959, those social-welfare groups can remain tax-exempt so long as they are “primarily engaged in promoting in some way the common good and general welfare of the people of the community.” Politicking cannot be their primary focus, and “primary” in this case means “51% or more.”

The new rules would vastly expand what constitutes “candidate-related political activity” by including such practices as handing out voter guides, holding candidate forums, printing or airing advertisements, and even criticizing a politician on a website posting in the two months before a general election.

If, say, a blog post by Friends of the Earth blasts a Republican for voting against new air-quality rules in 2015, and the Republican runs for re-election the next year, Friends of the Earth would have to go back and scrub the post from its site — or risk the IRS’ wrath. Many groups would probably decide to post nothing in the first place.

A blog post about a politician is, of course, quintessentially political speech of the sort the First Amendment expressly protects — or is supposed to protect. Under the new IRS rules, the government effectively would be rationing how many such items a group can post. The ACLU says the new restrictions would “pose a significant chilling effect” on the advocacy of countless nonprofits. First Amendment scholars warn they would “impose serious burdens on free speech.”

To watch these rules emanate from a liberal Democratic administration is doubly ironic. Liberals howled in outrage when the Supreme Court’s Citizens United decision overturned decades of campaign-finance law. Now the IRS proposes to do the same thing. What’s more, the idea that you can separate social welfare from government activity does not usually win much applause on the left.

To the contrary, conventional liberal wisdom holds that government often is the only means by which any meaningful advance in social welfare can be made. Private charities, churches, volunteer organizations — those are nice, but they can’t do the heavy lifting of social reform, in the liberal view. But in that case, political activity by social-welfare groups should be encouraged, not penalized.

Granted, some liberal social-welfare groups have objected to the IRS proposal, for many of the same reasons conservative groups cite. Nobody should have to worry that spending a little too much time registering people to vote will lead to a ruinously expensive legal fight.

Unfortunately, many other liberals are sitting on the sidelines — or, worse, defending the IRS — because of the blatantly partisan nature of its abuse. That abuse began when President Barack Obama criticized conservative groups for “posing” as nonprofit social-welfare organizations and several Democratic senators demanded an IRS investigation of such groups.

The IRS crackdown on tea party organizations did catch some liberal outfits, the way tuna nets catch an occasional dolphin. But two other data points render the partisan nature of the scandal indisputable.

First, Barbara Bosserman, the person the Obama administration named to investigate the IRS targeting, is not only a member of the administration, she also gave more than $6,000 to Obama’s election campaign and the Democratic National Committee. Welcome to the henhouse, Ms. Fox.

Second, the new IRS rules do not lay a finger on the biggest donors by far to political campaigns: unions, which are organized as 501(c)5 entities. How much do unions give? The Wall Street Journal’s Kimberley Strassel notes that “the Center for Responsive Politics’ list of top all-time donors from 1989-2014 ranks Koch Industries” — the infamous Koch brothers — “No. 59. Above Koch were 18 unions, which collectively spent $620,873,623 more than Koch Industries ($18 million).”

Liberals on the sidelines need to join their more long-sighted brethren and make common cause with conservatives in this debate. The IRS’ new rules might give Democrats an advantage for the next election cycle or two. But eventually a Republican administration will take over. Do liberals really want it to take control of an IRS that has been so dangerously weaponized?

Ed. Note: Everybody hates the IRS. Well… except accountants and various members of the Obama administration. But for the most of the American public, the IRS is nothing more than a goon squad of government thieves, demanding you hand over your hard-earned money or face the consequences. It’s immoral and, were they not working directly for the government, it would be illegal. That’s why it’s your patriotic duty to pay as little in taxes as you possibly can. And today’s issue of Laissez Faire Today gave readers a once-in-a-lifetime opportunity to learn how to do just that. Sign up for the FREE Laissez Faire Today email edition, right here, to start taking back your wealth and keep more of your income from the greedy hands of the government.