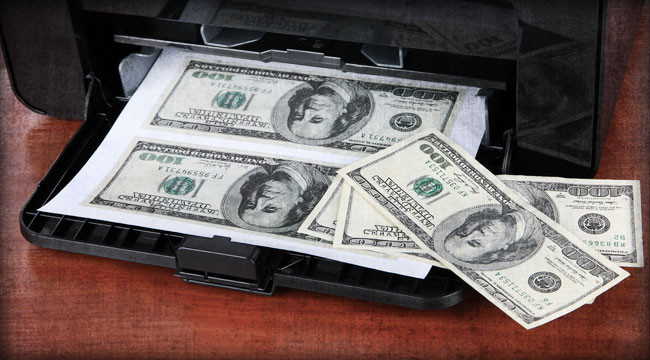 The Mythical Merits of Paper Money

One economic myth is that paper money is wealth. The proponents of big government oppose honest money for a very specific reason. Inflation, the creation of new money, is used to finance government programs not generally endorsed by the producing members of society. It is a deceptive tool whereby a “tax” is levied without the people as a whole being aware of it. Since the recipients of the newly created money, as well as the politicians, whose only concern is the next election, benefit from this practice, it’s in their interest to perpetuate it.

For this reason, misconceptions are promulgated about the “merits” of paper money and the “demerits” of gold. Some of the myths are promoted deliberately, but many times they are a result of convenient rationalizations and ignorance.

Paper money is not wealth. Wealth comes from production. There’s no other way to create it.

Paper money managers and proponents of government intervention believe that money itself — especially if created out of thin air — is wealth. A close corollary of this myth — which they also believe — is that money supply growth is required for economic growth.

Paper money is not wealth. Wealth comes from production. There’s no other way to create it. Capital comes from production in excess of consumption. This excess is either reinvested, saved, or loaned to others to be used to further produce and invest. Duplicating paper money units creates no wealth whatsoever, it distorts the economy, and it steals wealth from savers. It acts as capital in the early stages of inflation only because it staels real wealth from those who hold dollars or have loaned them to someone.

Instead of economic growth being dependent on money growth as the paper money advocates claim, great economic harm comes from central banks creating new money out of thin air. This leads to the sort of economic stagnation and economic decline that we are experiencing today. Inflation — increasing the supply of paper money — is the cause of malinvestment and the business cycle, and literally destroys the capital needed for economic growth and stability. The formation of capital through savings is discouraged or eliminated by a paper money system. Instead of paper money producing economic growth, it accomplished the opposite. If money growth were necessary for economic growth, the 1970’s would have been a great decade. During this period of time the Federal Reserve nearly tripled the total money supply but the economy grew only 37 percent.

Although the supply under a gold standard would in all probability increase at the rate of two to three percent per year, this growth is not a requirement for gold to function as a sound currency. This natural or market increase in the money supply easily accommodates population growth and economic growth as long as prices are freely adjusting.

If population or economic growth presents a need for “more” purchasing media, prices merely adjust downward if the money supply is not growing. In the latter part of the nineteenth century this occurred. Wholesale prices dropped 47 percent from 1879 to 1900 and economic growth averaged nearly four percent per year. Obviously, although prices were decreasing, there was no depression. While an increase in the supply of money is never needed to produce economic growth, under a gold standard there might be honest money growth (i.e. not money created out of thin air by the politicians and bankers for the benefit of special interests) and this would serve to smooth out price adjustments.

The myth that paper money is wealth has another corollary: the myth that there’s “not enough gold” for reestablishing a gold standard. But this is merely a device used by paper money advocates to confuse the uninformed, and should carry no weight in the debate of gold versus paper. Hans Sennholz explains this clearly in his essay “No Shortage of Gold”:

On the other hand, if the supply of goods increases while that of money remains unchanged, a tendency toward enhancement of the purchasing power of money results. This fact is probably the most popular reason advanced today for policies of monetary expansion. “Our expanding national economy,” economic and monetary authorities proclaim, “requires an ever-growing supply of money and credit in order to assure economic stability.”

No one can seriously maintain that present expansionary policies have brought about economic stability. During the last forty years of almost continuous monetary expansion, whatever else it may have achieved, did not facilitate economic stability. Rather it gave our age it’s economic characteristic — unprecedented instability.

Ludwig von Mises, in his book A Critique of Interventionism (1929), clearly denounces the belief that government can create wealth by printing paper money. He explains:

This is a powerful political and economic message, and yet it seems that so few understand it. Unfortunately, the poorer the people get, the moe economic problems we have, the more inflation we endure, and the higher the interest rates go, since more people demand government intervention. This trend has to be changed if we expect to preserve our freedoms and our standard of living.

Fact: Paper money is not wealth, it steals wealth.

A second myth is that “easy” money causes low interest rates. This myth is based on the erroneous assumption, itself a myth about government, that government officials — the Federal Reserve Board, the Congress, or the Treasury — can actually set interest rates. In reality the market determined interest rates. Governments can dictate rates, but if these rates are contrary to the market, government will not achieve the intended goal. For instance, if a usury law establishes a ten percent interest rate and the market rate if fifteen percent, no funds will be available except those allocated through government force and the creation of new money.

One reason this myth is so persistent is that in the early stages of inflation, an “easy” monetary policy temporarily lowers interest rates below market levels. Before the people are aware of the depreciation of their currency and do not yet anticipate higher prices, the law of supply and demand serves to lower “cost” of money and interest rates fall. But when the people become aware of the depreciation of the dollar’s value and anticipate future loss of purchasing power, this prompts higher interest rates due to inflationary expectations.

This expectation of future inflation and higher risk is determined subjectively by all borrowers and lenders and not by an objective calculation of money supply increases. These increases in the money supply certainly are important and contribute to the setting of the interest rates, but they are not the entire story. Interest rates vary from day to day, week to week, and year to year. There is no close correlation between money supply figures and interest rates.

Crises and panics can occur for political as well as financial reasons; and interest rates can be pushed higher than monetarist theory says they “should be.” In the early stage of inflation, rates may be lower than they “should be,” and in the latter stages frequently are higher than they “should be,” if by “should be” one means commensurate with money supply growth. Nevertheless, wrong ideas die slowly. “Easy” money, that is, inflation of the paper money supply, is still thought of as an absolute method by which the monetary authorities can achieve low interest rates.

This is not to say the Federal Reserve is helpless in manipulating interest rates. If it alters the discount rate and injects new money into the market, the immediate reaction can be that of lowering rates. But a gold-backed dollar, even if only partially backed, is a different sort, and at the time of the ’30s and the ’40s rates were at historic lows.

If the demand for lower interest rates is great enough and not accompanied by a call for sound currency — gold — the politicians will be “forced” to accommodate the demand by means of massive inflation of the money supply with strict credit controls and credit allocation. This would solve nothing, would serve to worsen economic conditions, and real interest rates in the markets would eventually soar. There is no substitute for sound money, and the sooner we realize this the better.

Ed. Note: People blindly trust that “easy money” will bring about growth. They assume that those in power know what they’re doing and that, in the end, the U.S. is simply far to great to fall into the traps that have snared so many other countries throughout history. Of course, you know better. But this is only half the story. The other half is detailed every day in The Daily Reckoning email edition. To get the full analysis, sign up for the FREE Daily Reckoning email edition, right here.