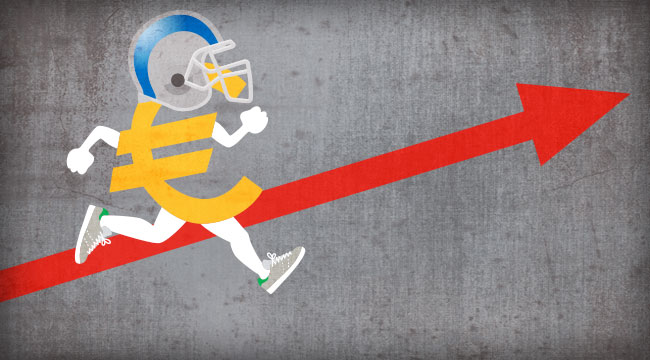 Every football fan is familiar with the head fake. It’s a type of feint that occurs when an offensive running back is confronting a defensive tackler.

Done correctly, the offense can rack up huge gains in yardage. The success of the head fake relies on the defense acting on reflex rather than having time to think about what is really going on.

Markets have head fakes too. This happens when some news release or other market-moving event occurs and traders act on reflex rather than taking time to dig deeper. Once the reflex reaction shows up in the market, momentum gathers, and other traders follow the trend without thinking.

Before long, the market is lunging at air, just like the football defender. Meanwhile, fundamentals are ready to go in the opposite direction, with potential gains for investors who are watching the real direction of the play rather than the head fake.

Something like this happened earlier this month. The U.S. employment report showed larger-than-expected job gains in May. The economy created 280,000 jobs in May; the March and April jobs totals were revised upward as well.

Immediately, the market assumed that the economy was stronger than other recent data suggested. This raised expectations for a Fed interest rate increase in September, with some analysts even putting a June rate increase back on the table.

The prospect of higher rates caused the dollar to rally, because global capital was now expected to flow into U.S. dollars as part of the global chase for yield. The flip side of a stronger dollar is a weaker euro. The euro plunged from $1.13 on Wednesday, June 3, before the jobs report, to $1.11 on the day of the jobs report. It traded even lower, to around $1.10 by early Monday morning last week.

The reflex reaction was completely predictable. More jobs meant stronger growth, which meant higher interest rates leading to a stronger dollar and a weaker euro. The market lunged in the direction of that trade. The only problem was that the market fell for a head fake based on the headline number. The real story was elsewhere in the jobs report.

The May report also showed that unemployment increased to 5.5%, from the prior month’s level of 5.4%. That may not sound like much, but it’s a move in the opposite direction of Fed chairwoman Janet Yellen’s recent forecast of 5.0%. That forecast was given in a speech on May 22 in which Yellen described conditions she expected to prevail before the time was right to raise rates.

Yellen said she would act on a forward-leaning basis. This means that she might raise rates when employment hits, say, 5.2%, ahead of her forecast level of 5.0%. Still, the 5.5% level was a move in the opposite direction of her expectations.

This is a good example of the types of clues we look for in our currency analysis. In intelligence analysis, we call these overlooked data points “indications and warnings.”

While Wall Street cheered the job creation shown by the report, we viewed the rising unemployment level as a reason for Yellen to wait longer before she raises interest rates.

The answer is that a lot of people came back into the workforce and started looking for jobs. New jobs were added, but the number of people looking for jobs went up also, so the percentage of unemployed in this larger pool of job seekers went up.

This change in the behavior of the unemployed job seekers is another indication and warning. For the past several years, economists have debated whether the weak job market is structural or cyclical.

Yellen has leaned in favor of the cyclical interpretation, but the evidence one way or the other has been ambiguous. The surge of new workers into the workforce in May supports Yellen’s view. If that view is correct, it means that there is an ample supply of labor waiting on the sidelines to come back into the workforce.

In turn, inflation and wage pressures will remain weak because there is still slack in the labor market. This means that Yellen can keep rates at zero for longer to encourage more job creation without fear of inflation.

Raising rates now could choke off this positive momentum. Yellen won’t raise rates until the new entrant pool dries up and the unemployment rate drops again. At this point, 2016 looks like the earliest date for a rate increase, but 2017 cannot be ruled out.

Meanwhile, the market’s reflex reaction to the head fake resulted in a stronger dollar, which hurts U.S. growth via exports and adds to deflationary pressure in the form of lower import prices.

Weak growth and deflation are Yellen’s other worries in addition to job creation. A strong dollar makes her effort to raise rates even more challenging. This is the basic dynamic of the currency wars that we follow.

A rising unemployment rate, weak growth and persistent inflation are not a recipe for a rate increase. Once the market realizes it has lunged at thin air, attention will shift back to the real dynamic. As markets see that Yellen will not raise rates, capital flows will reverse, the dollar will weaken and the euro will resume the rally it began last March.

The weak euro of the past year combined with negative interest rates and quantitative easing by the European Central Bank have converged to give a lift to European growth. Even if the euro strengthens as we expect, growth in Europe should persist because of abundant labor, Chinese capital and continued monetary ease.

Spanish manufacturing, French tourism and German exports continue to be bright spots. A rising European stock market and a rising euro are a “two-fer” for U.S. investors, providing a chance to win on stock prices and exchange rates.