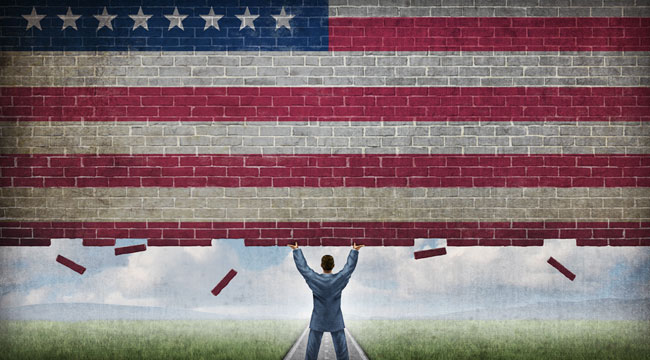 All government-directed economic activity grows at the expense of the private sector. And the election suggests that government coercion will drive even more U.S. economic activity in the future. This is a shame, because freely adjusting prices, competition, and innovation elevate living standards. Mandates, price controls, and subsidies — coercive actions — depress living standards. Quality falls. Shortages develop and persist.

Americans are in the midst of a destructive, self-reinforcing political cycle — a cycle that might conclude in a nightmare scenario. A sloppy diagnosis of the financial crisis lies at the root of the destructive cycle.

The free market did not cause the financial crisis; political meddling with interest rates and credit allocation caused it. Without a proper diagnosis, the medicine can be worse than the disease. In this destructive cycle, the popular response to a financial crisis caused by too much government and central bank influence is “Give us more government and crazier central banks!”

…a recession leads to wider deficits, which in turn lead to policies that widen deficits yet again.

President Obama’s health care law provides an example of how government dipping its toe into a market can start a destructive cycle that ends in even more government control: Years after its passage, many of Obamacare’s details remain unknown. But we know it will demand insurance companies not charge premiums that vary too much for people with different health risks. The insurance companies will receive millions of new (but unprofitable) customers.

It’s easy to imagine price controls and mandates bankrupting many health insurance companies. All the while, politicians would blame the insurers for poor customer service and putting “profits over people.” Before you know it, the political door for a single-payer health care system would be pushed wide open — all because politicians are not interested in honestly discussing the impact of price controls and mandates on markets.

This is not meant to be a political screed. After a year or two of political theater and propaganda, you must be exhausted. But whether we like it or not, politics are an important part of the investing equation. And it is clearer than ever that the economy will continue getting mauled in a self-reinforcing cycle of more government leading to market failures leading to even more government.

Some of you are disappointed with the results of the last election, some are happy, and some (including those with libertarian views) wonder why any individual or political party would want to preside over a country whose challenges dwarf its opportunities.

Call me a grumpy cynic, but it helps to be a realist when examining this situation. Here’s why: You can’t argue, after thinking about the following four points, that America’s challenges (ignoring individual families or companies) do not outweigh America’s opportunities:

First, the “nondiscretionary” federal budget is set on autopilot, driven by demographics. Political inertia will not allow meaningful reforms. We don’t “have the votes,” as they say in Congress, to reform insolvent entitlement programs.

Second, a critical mass of voters demand government services, including health care — health care that remains waiting for bureaucrats to define. Here is a guess, based on government intrusion into markets: The health care system will become as popular as your local Department of Motor Vehicles within five years. Tuesday’s exit polls revealed that the popular American characteristic of self-reliance is not so popular anymore. Many voters see a European-style welfare state not as a bankrupting failure, but as a model for the U.S. They’re trading their freedom for the illusion of economic security.

Why is government-provided economic security an illusion? Simple: There is no way to pay for these benefits without raising tax rates to a degree that would destroy both the economy and the financial markets or annihilate the value of the dollar. Confiscating the income and assets of the “rich” (ignoring the fact that this would put countless people out of work) would make an unnoticeable dent in the budget deficit. This is a fact, not an opinion. Unfortunately, rather than start a factual conversation about the deficit, politicians choose to inflame the toxic emotion of envy.

Third, the next recession — and we are due for one in the not-too-distant future — would push the federal deficit well beyond expectations. Tax receipts would fall, along with incomes, capital gains, and economic activity. Spending on unemployment programs would rise again. The Obama administration’s predictable response to a recession would be another stimulus plan in which Democrats get more spending and Republicans get more tax cuts.

So in the end, a recession leads to wider deficits, which in turn lead to policies that widen deficits yet again. Paul Krugman and most other economics professors would love it. Krugman would consider this a worthwhile effort to fill some mythical, immeasurable “output gap,” while people with common sense would consider this going down the road to hyperinflation.

Fourth and finally, the Federal Reserve has boxed itself into a corner. Quantitative easing (QE) is a one-way proposition; there is no practical reversal from QE, as newly printed money has boosted the price level above where it otherwise would have been. Reversing QE would bring about dreaded “deflation.” Any exit strategy from QE exists purely in academic models. In reality, reversing QE (selling bonds and draining cash from the financial system) would crash all of today’s manipulated financial markets simultaneously.

The Fed’s goals early on in the crisis focused on supporting the banking system at the expense of savers. Now the Fed will be pressured, threatened, and eventually forced to monetize ever more U.S. government debt — all to finance a government budget that the private sector cannot afford.

P.S. The future political environment will multiply the risks facing investors. But there will always be opportunities for contrarian investors on both the long and short sides of the market. In today’s issue of Laissez Faire Today, I gave readers two of my favorite ideas of both of these sides of the market. It’s just one small benefit of being a reader of the FREE Laissez Faire Today email edition. Sign up today, right here, for more great insights and access to real investment opportunities you won’t find anywhere else.

QE Is Much Closer Than You Think

The differences — and similarities — between QE and “QE-lite”…