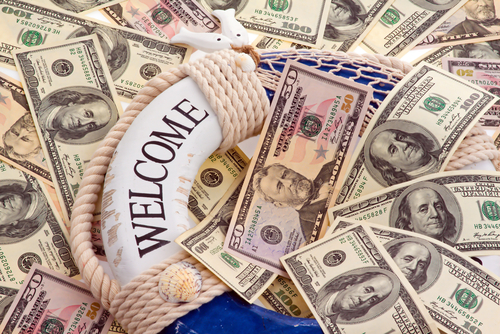 — “These Boots Were Made For Walkin’”, written by Lee Hazlewood, performed by Nancy Sinatra.

Where did we leave off last week? Oh yes…right where it began. Nothing new. Stocks were virtually flat. Gold hemmed and hawed. And Facebook tore up a contract with a social gaming company called Zynga. We have no idea what that even means…but the papers assure us it’s important. We’ll see…

Meanwhile, the whole world — or at least the portion of it concerned with investing — seems to be on edge. Folks want to know what’s happening with the “fiscal cliff.” You remember that oh-so-fateful precipice, right? Of course you do. How could you forget!

As the White House and Republican leaders enter the final month of negotiations to avoid a year-end “fiscal cliff,” both sides struck an uncompromising tone Sunday, as warnings mounted that they will be unable to forge an agreement to stop an automatic series of deep spending cuts and large tax hikes that could push the economy into recession.

You’ve gotta give it to the mainstream media. They know how to make a silk purse from a sow’s ear…a tsunami of a story from a ripple in a millpond…

“…But wait! Here comes a bipartisan subcommittee! The world is saved!”

The Post continues, citing the Republican’s man in the ring, John “The Bruiser” Boehner:

“Right now, I would say we’re nowhere, period. We’re nowhere,” House Speaker John A. Boehner (R-Ohio) said on “Fox News Sunday.” Boehner added that the Republicans have offered a way to break the stalemate — by compromising on an overhaul of the tax code that would limit deductions that disproportionately benefit the rich…

Does this mean that the Republicrats have the Democricans on the ropes? Ah, not so fast. Here comes the Dem’s slugger, “Tiny” Tim Geithner:

…Treasury Secretary Timothy F. Geithner rejected that proposal Sunday, insisting that the wealthy pay higher tax rates and that Republicans come forward with a plan that meets that requirement. “There’s no path to an agreement that does not involve Republicans acknowledging that rates have to go up on the wealthiest Americans,” he said on NBC’s “Meet the Press.”

So, how is this going to end? Jittery investors need not wait any longer for an answer. We’ll tell them exactly what’ll happen. Right here in this space. And for free! Are you ready? Really?

Ok…you asked for it…

That’s right: Nothing. Nothing will happen. Nothing of substance, anyway. Politicians will bloviate…the media will pontificate…and the real, underlying situation will continue to deteriorate.

At this stage, there’s nothing one man…or even one party…can do. The ship isn’t headed for an iceberg (or a fiscal cliff)…it has already hit it. The collision happened in stealth, under cover of Fed-sponsored market meddling, interest rate fiddling, EZ credit…and the usual mix of lying, politicking and electioneering. During the night, while passengers and crew slept, ice struck metal, wrenching huge chunks of iron from the ship’s hull…which now has a $16 trillion, national debt-size hole in it. The vessel is taking on water…fast, at a pace never recorded in its history. Worse than that, the total drag on the ship — when one takes into account unfunded liabilities — comes to five times GDP, or roughly $86 trillion. That’s a lot to tow…especially for a sinking ship.

All this yapping on television and in the papers, the incessant chatter about “eleventh hour saves” and “reaching across the aisle” is really just one big distraction…something to keep the masses well-fed and looking the other way. The Romans called it The Great Circus. They built a Colosseum in which to play out their distractions. And the crowd cheered while Rome burned to the ground.