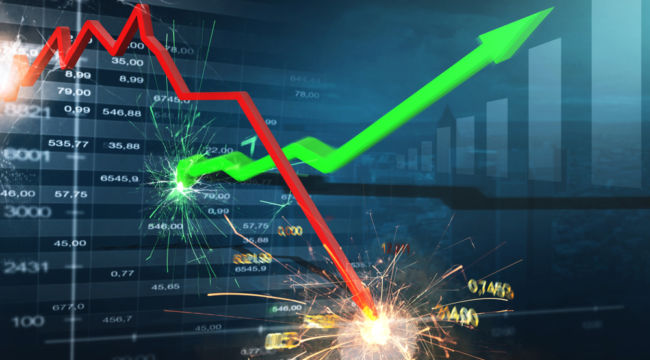 The Fed Has Never Been More Divided

There’s a growing panic in Fed headquarters not only about the inability of policy to improve the economy, but over the fact that the board members don’t even know what policy to pursue. It’s one thing to say the “right” policy isn’t working. It’s quite another to realize the Fed doesn’t even know what the right policy is.

At some point panic sets in. This is not about panic in the markets. That will come soon enough. It’s about panic among policymakers overwhelmed by forces they don’t understand and cannot control.

What we’re seeing now are the usual signs of panic consisting of finger-pointing and wildly different views of the reality of the situation. The Fed is now divided more than ever when it comes to policy.

The FOMC is normally the ultimate consensus-driven institution. It is even more consensus-driven than usual right now because Fed Chair Jay Powell is a lawyer, not an economist, and lawyers are typically motivated to reconcile opposing views and reach a settlement that all parties can live with.

There are a total of 12 voting members of the FOMC consisting of seven Fed governors and five regional reserve bank presidents (there are two vacancies at the moment, so the total voting members are 10). Unanimous votes on policy are not unusual, but one or two dissents are quite common.

A typical disagreement inside the FOMC consists of, say, 10 votes for one policy (to raise, lower or stand pat on rates) and two dissents from that consensus. Strong dissents or close votes (say, 6-4) are almost unheard of. The decision-making and voting process is nondramatic by design.

Yet the minutes of the Fed’s July 31, 2019, meeting show not just dissent but dissents in opposite directions.

The majority voted to lower rates 0.25%. Yet some FOMC members wanted even larger cuts of 0.50%, while others wanted no cuts at all. This kind of “three-way” disagreement is almost unheard of.

It gets worse. Most participants agreed that the economy has been stabilizing. Inflation appears poised to make a comeback from recent disinflation (the weakness in prices was “transitory”). If that’s true, why cut rates at all?

Yet the same minutes show concern about slowing growth due to trade wars and declines in manufacturing output. Which is it, stable growth or slower growth?

The Fed is in complete disarray. There’s no intellectual coherence and no consensus on policy. That’s not surprising because the Fed’s models are badly flawed.

The importance of these minutes is not the policy decision but the light they shine on the Fed’s own confusion. Some Fed members want to cut a little, some want to cut a lot and some don’t want to cut at all. They are already contemplating what to do when the Fed hits the zero bound:

I received some insight in late July, when I was at the Mount Washington Hotel, site of the 1944 Bretton Woods international monetary conference, to acknowledge Bretton Woods’ 75th anniversary.

One of the meetings I attended was deemed “off the record.” One of the members in attendance was a senior official at a highly regarded Fed regional reserve bank. Another was a former member of the Fed board of governors and now a top monetary economist who keeps in touch with current members of the board.  The third was a governor of the European Central Bank.

What they discussed was not just critical to markets, but was also surprisingly straightforward. Central bankers are notorious for speaking in elliptical and opaque words and phrases. That was not the case this time. The central bankers told our group behind closed doors exactly what was happening with the economy, where central bank policy was headed and why.

The first point they made was that U.S. growth is slowing down and this fits in with an even more distinct slowdown in world growth. Overseas, the picture is more dismal.

Germany and the U.K. both had negative growth for the second quarter. China is slowing dramatically. This slowing trend is expected to continue because of head winds from trade wars and currency wars.

On this point, they are certainly correct.

The panel’s point was that you cannot describe interest rates as “high” or “low” without considering the real rate. The panel was saying that even if nominal rates are low (they are) real rates are not particularly low (they’re not).

The implication is that nominal rates must be cut sharply to keep pace with falling inflation and to produce lower or even negative real rates.

I was extremely impressed with the point the central bankers were making about real rates versus nominal rates. It’s something that most analysts gloss over in their analyses even though they understand the difference.

I was even more impressed with the matter-of-fact way in which the discussion unfolded. Here was an A-list of U.S. and European central bankers telling us that interest rates have to drop sharply to produce low real rates to have any hope of stimulating the economy out of its slowdown.

This roadmap to future central bank policy could not have been more clear if they lit it up with neon signs.

But again, I was surprised at how relaxed the U.S. central bankers were about negative nominal interest rates. They recognized that the chase for negative real rates might require moving the fed funds target rate back to zero if disinflation persisted or turned into deflation.

Once at the zero bound, the Fed might resort to more quantitative easing (QE4 anyone?), but it might also go to a negative interest rate policy. Of course, it could use negative rates and QE as a double dose of easing if the situation required.

The Fed panelists made it clear than no decision has been taken on this negative rate policy. They merely made the point that the Fed was perfectly prepared to go there if needed. It was not regarded as controversial by the panelists even though it was completely unprecedented in the history of U.S. monetary policy.

I was not shocked at the announced policies, but I was surprised at how matter of fact the central bankers were in announcing them. What we heard was that Fed and ECB policy rates are coming down quickly. ECB rates will go more negative and Fed rates will chase disinflation down to zero and perhaps beyond if needed.

We must conclude that a new rate-cutting cycle is underway and rates may fall all the way back to zero before it is over. And quite possibly lower than zero.