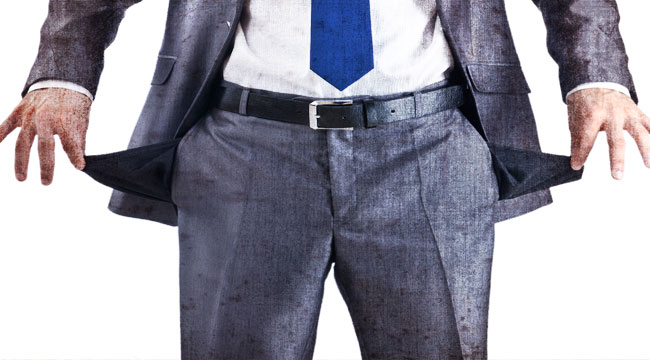 The Emperor Is Clothed, but Broke

Lehrman’s parable helps illustrate the strange relationship between the United States and its trading partners:

The king bought a suit every week, and he paid the tailor with a check, which the tailor put in his drawer. After years and years of paying with his checks, the king had an enormous debt to the tailor — and a huge cash balance in his coffers, which, in fact, he thought made him a very rich man.

Suddenly, the tailor was in a position to cash his checks, and the king was insolvent.

The analogy with the present day is the United States is in the position of the king. The United States pays its debts internally — that is to say it finances the budget deficit created by the Congress and the president by issuing its currency, and it finances its balance of payments deficits abroad by issuing currencies to foreign countries and foreign suppliers.

These foreign suppliers do not cash these checks. They accumulate them in their central banks, or in their treasuries, in the form of huge dollar balances, today approximately $5 trillion. The king — the United States — is running this huge deficit, paying for it, so to speak, with checks that are not being cashed, and the deficit of the United States and Congress continues year in and year out because there’s no restraint.

The dollar’s reserve currency status, Lehrman goes on, allows foreigners and others to finance the budget deficit and the trade deficit. “No one wants to take away the United States’ credit card, upon which there are no restraints, least of all the United States. Secondly, those nations that absorb these reserves want a place where they can deposit them and then quickly sell them if they have to, and that kind of liquidity is available only in the U.S. markets.

“The obverse of that privilege is that in order to maintain the dollar’s reserve currency role and in order for the foreign countries to accept it, they’ve had to accept the decline in the value of the dollar.”

Thus, the dollar you held in your hand in 1971 buys only 18 cents of goods today. “That is the equation that shows that the enormous issuance of dollars to finance our deficits may look like the system is continuing, but the price has been paid by the U.S. consumer.”

The gold standard puts an end to all that. “Consider,” he writes in The True Gold Standard, “that no government authority varies the value of the defined unit of measurement of the 36-inch yardstick to 29 inches this year or to 39 inches next year; nor do governments vary the value of a unit of weight, the pound (16 ounces), to 12 ounces this year and 20 ounces next year; nor do they vary duration of the unit of time, the hour, from 60 minutes today to 50 or 70 minutes next year.”

What should the “defined unit of measurement” of the dollar be? Lehrman won’t fix a precise proportion. He says the level should be no less than the total per ounce cost to produce an ounce of gold… provided the nominal level of wages would not fall.

The British Botch: How NOT to Revive a Gold Standard

Why is that last part about wages so important? For the perfect example of how not to return to a gold standard, Lehrman submits the case of Great Britain after World War I.

In 1925, Winston Churchill was chancellor of the Exchequer, or finance minister. “Churchill listened to a lot of people, some very talented economists who wanted to restore the prewar parity,” Lehrman explained to us. “He was a very resourceful man. He understood the arguments and he decided on restoring the prewar parity” — never mind that the amount of pounds in circulation had exploded in the previous decade.

It was a disaster: “This caused a terrible deflation in England. It virtually destroyed the shipbuilding industry, the coal industry, and it led to the first major general strike by all the workers in England disrupting all of trade. It was a sincere, but tragic and disastrous error.”

Lehrman also says don’t be fooled by the phony gold standard of the 1920s. Under the “gold exchange standard,” currencies were not pegged to gold, but rather to the pound and the U.S. dollar. Result: paper claims, piled upon more paper claims, with gold taking a back seat.

Ugh… Is Our Best Hope for Stable Money a Blue-Ribbon Panel?

The era of what we called The Great Dollar Standard in The Demise of the Dollar has taken up most of our lives… but it’s only a blip in the sweep of history — “a very short period,” Lehrman told us, “judged by two or three millennia of the development of the modern economy.

“I have little doubt that this last century of disorder, sooner or later, is going to be replaced by those who recognize that the economic system needs a monetary standard that is lasting, produces economic growth and is defined by a weight unit of gold.”

Ever the optimist, Lehrman has high hopes Congress will form a Centennial Monetary Commission to examine the way forward as the Federal Reserve notches its 100th anniversary later this year.

The commission — a bipartisan blue-ribbon panel — is the brainchild of Rep. Kevin Brady (R-Texas). “We want a very thoughtful, very constructive analysis of the last 100 years,” Brady told the Financial Times in April. “When the house isn’t on fire, we want a discussion of what role the fire department should play.”

We’d question his assumption the house isn’t on fire; at the very least, the insulation is smoldering in the presence of live and exposed wires.

Be that as it may, Lehrman says the commission could prove enormously useful: “In the end,” he told us, “we have only one laboratory by which to examine the optimum or least imperfect economic and monetary policy, and that’s the laboratory of human history. It is very different from a whiteboard at the University of Chicago or a blackboard in the Harvard Economics Department.”

As we go to press, Brady’s bill has 17 co-sponsors, all of them Republicans. The website govtrack.us gives it a 6% chance it will get out of committee… and a 1% chance of passage. The academics won’t give up their whiteboards and blackboards without a fight.

But the stakes couldn’t be higher: “In previous centuries,” Lehrman writes in The True Gold Standard, “financial disorder often preceded civil wars, national wars of revenge — indeed, catastrophic global war. Thus, it is now time to restore monetary order to end inflation and the deflation it brings on. It is time to reassert the constitutional monetary standard of the American republic and thus to restore a stable dollar and stable exchange rates.”

Next week, we’ll conclude this series on Lewis Lehrman. Make sure you catch our final installment so you can learn about an exclusive offer for Laissez Faire Today readers.