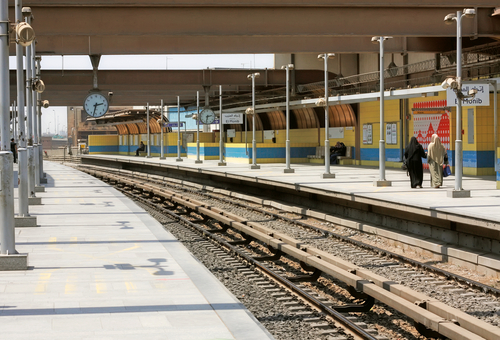 Opportunities are usually like a train. They arrive and then they depart…and disappear down the tracks. Choo-choo!!

So unreliable is its arrival and departure that you begin to doubt that any such train actually exists. Last night, Joel Bowman shared his experience taking a train from Luxor to Cairo a few years back.

He and his family arrived at the station around 8:00 PM — about one hour before the scheduled arrival — then waited patiently for a few hours, then impatiently for a couple more hours…but the train did not arrive. Finally, Joel’s exasperated father demanded answers. He worked his way up the chain of command until getting to the top guy.

“When will the train arrive?” Joel’s father barked.

“I guarantee that it not arrive in less than five minutes,” the Egyptian train supervisor smiled.

The train finally arrived about two hours later, and lurched out of the station on its 8-hour trip to Cairo…that lasted about 14 hours.

On some level, everyone understands that opportunities are like trains. And yet, most folks live their lives as if opportunity is like a car, sitting in their garages, waiting for them to decide when to leave and where to go.

But that’s not true. There is no expression in the English language for the “Car that got away” or “Whoops, too late, the car’s left the garage.”

There are moments in every life where binary options present themselves. A real life, “Let’s Make a Deal.” You must choose Door number one or the curtain where Carol Merrill is standing. One option opens to a chain of life-altering opportunities, the other opens to a goat on a leash — i.e., life-changing forgone opportunities.

If you think back on the most important trains you’ve missed in your life, I’d bet that very few of them were “Swiss trains” — predictable, definite choices between “Option A” and “Option B.” I’d even be willing to wager that few of them were Amtrak trains. Probably, for most of us, the most memorable missed train was an “Egyptian train.”

Either the opportunity seemed so grim and uninviting that we never honestly considered it in the first place or, alternatively, we actually bought a ticket and sat on the platform. But after so many hours had passed, we doubted ourselves and left.

Friends and family rarely understand why you’d want to ride on that stupid thing in the first place. And then, even after you’ve “bought your ticket,” you sit and sit on the platform while time slowly passes. Everyone else goes about their lives. You look like an idiot.

To use the most infamous example, the opportunity to escape the Holocaust was certainly not a Swiss train; it was an Egyptian one. With few exceptions, the folks who saved themselves, inflicted severe hardships upon themselves by selling businesses, abandoning lifetime friends and familiar neighborhoods to relocate elsewhere.

And even after arriving on the platform of their “new lives,” they would have possessed very little confidence that they had made an intelligent decision. Many of them must have felt like paranoid idiots, in other words.

We say Bravo! for paranoid idiots. Both before and since Nazi Germany, many are the paranoid idiots who saved themselves, or at least their wealth, by boarding the clangy, rickety Egyptian train of emigration and/or international diversification.

Argentineans understand this imperative viscerally, thanks to generations of fiscal mis-management and corruption. Americans don’t. We are accustomed to being the land of opportunity, the preeminent global super-power, the issuer of the world’s reserve currency. We are the cat’s meow. Why on earth would we ever board any train?

Maybe we shouldn’t, but sovereign dominance is never a lasting endeavor. The First become last…or at least no longer first.

The nearby chart illustrates this point very clearly. Seventeen years ago, three of the five so-called PIIGS nations, possessed AA credit ratings or better. At the same time, the Latin nations of Brazil, Chile and Columbia labored under “junk” credit ratings, or near-junk.

Fast-forward to the present, the once-highly-rated European nations in this chart have plummeted into the ranks of junk, or near-junk, credits. Conversely, the formerly junk Latin credits are now investment-grade.

Such is the way of nations…and always has been.

Responding to the millennia-long reality that no nation possesses a monopoly on opportunity, individuals throughout history have attempted to relocate from less desirable locations to more desirable locations. In other words, throughout history a certain percentage of the world’s inhabitants have felt they lost the “lottery of life,” or at least that they did not win it.

Warren Buffett, the Chairman of Berkshire Hathaway and latter-day champion of “fair taxation,” has said that anything good that happened to him could be traced back to the fact that he was born in the right country, the United States, at the right time (1930).