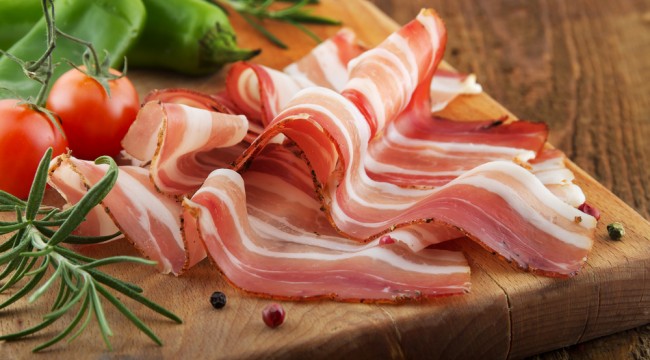 The Dietary "Enemy" You Shouldn't Feel Bad About Eating

There’s no shortage of worthy candidates. Like the consumer price index rising 2% a year. As we’re fond of saying, any resemblance to your own cost of living is purely coincidental.

Then there’s the one from 11 years ago about weapons of mass destruction in Iraq. That begat a series of unfortunate events continuing… well, right up through today.

Or how about this whopper…

“High levels of saturated fat and cholesterol in the diet are linked to increased blood cholesterol levels and a greater risk for heart disease.”

That comes from the federal government’s “Dietary Guidelines for Americans.” It has been conventional wisdom for more than three decades. Butter? Cheese? Red meat? Avoid.

But this conventional wisdom is quickly being turned on its head in 2014. And that reversal signals a profit opportunity you don’t want to miss.

Our investment director Paul Mampilly discussed this last week in his essay “Make 200% on a Stock that Could Help End Obesity”, in which he linked rising rates of obesity to the introduction of the artificial sweetener aspartame in 1981. He shared the following chart… 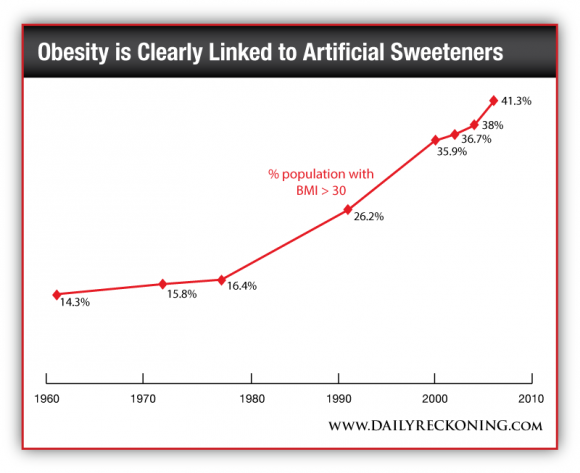 “You see how that red line rockets upward?” said Paul. “It happened right after the introduction of the aspartame chemical as a sweetener.”

Readers objected: “It is certainly curious that the increase in obesity began at the same time as the introduction of aspartame,” wrote one, “but that in and of itself proves nothing.”

Hmmm… As it happens, the widespread demonization of saturated fat started right around the same time… and only now is the damage becoming obvious.

It began with the late Sen. George McGovern, best remembered for losing all but one state to Richard Nixon in the 1972 presidential election.

In 1976, he convened a fateful series of hearings before his Select Senate Committee on Nutrition and Human Needs. These hearings “almost single-handedly changed nutritional policy in this country and initiated the process of turning the dietary fat hypothesis into dogma,” wrote Gary Taubes in his landmark 2007 book Good Calories, Bad Calories.

McGovern had come under the spell of the low-fat diet guru Nathan Pritikin. He even spent a month at Pritikin’s clinic — where he found himself unable to stick to Pritikin’s guidelines. Heh…

But, undaunted, McGovern’s committee issued a report in 1977 that led to the feds’ publication of the first Dietary Guidelines for Americans in 1980. From this point forward, saturated fat was the enemy.

But the Dietary Guidelines were quickly becoming the received wisdom. The makers of processed foods responded by removing the fat. Unfortunately, that rendered the foods as tasty as cardboard. Solution? Substitute sugar for the missing fat.

New problem: Sugar, unlike saturated fat, does not leave the body feeling satisfied; instead, it stimulates a craving for still more sugar.

So by the early 1990s, Americans were downing entire boxes of “SnackWell’s” cookies in one sitting and thinking it was all good. Hey, they’re low-fat!

Or as registered dietitian Cathy Nonas explained, “While people who want to drop weight have decreased dietary fat, they’ve also become volume eaters, giving in to a second or even a third bagel because they’re using no-fat cream cheese.”

And the red line on that chart kept rising and rising. Yesterday came word from the Centers for Disease Control that diabetes now afflicts 9.3% of all Americans — 29 million people.

Three months ago, the shaky edifice of anti-fat dogma collapsed in a heap. The journal Annals of Internal Medicine published an analysis pulling together decades of previous studies.

Its conclusion, as paraphrased by author Nina Teicholz: “Saturated fat does not cause heart disease.”

“The fact is,” Teicholz wrote last month in The Wall Street Journal, “there has never been solid evidence for the idea that these fats cause disease. We only believe this to be the case because nutrition policy has been derailed over the past half-century by a mixture of personal ambition, bad science, politics and bias.”

The tide of public awareness is quickly shifting. Teicholz has published a best-seller called The Big Fat Surprise. A documentary called Fed Up is now in widespread release. “What if the solutions weren’t really solutions at all?” asks narrator Katie Couric. “What if they were making things worse? What if our whole approach to this whole epidemic has been dead wrong?”

Awareness is one thing… but it doesn’t solve the epidemic of obesity that’s now swept the nation. And the drug industry is woefully lacking in solutions…

“I think all the companies are finding it a challenge to get much traction with their medication,” says Dr. Michael Jensen, a professor of medicine with the Mayo Clinic.

Two weight loss drugs have come on the market in the last two years. Neither has been a blockbuster. Yesterday, the FDA delayed approval for a third.

“Despite the urgency of the problem, doctors and patients have had a lukewarm response to the latest meds,” Businessweek reports.

“That’s partly because the drugs are only modestly effective. Patients and doctors also haunted by an earlier generation of diet drugs that were pulled from the market because of sometimes lethal side effects.” Remember Redux and fen-phen? Yeah.

P.S. Tuesday, June 17, 2014 has the potential to change everything. And in today’s issue of The 5 Min. Forecast I showed readers exactly why. Not to give too much away, but that’s the date when the FDA delivers its early verdict on a medical device that more or less tells the brain “I’m full.” Doctors implant the device; the patient goes home the same day. Trials show the typical patient losing 25% of his excess weight. “No other kind of obesity therapy even comes close to these results,” says Paul Mampilly, who’s thoroughly vetted the company that makes this device. “The best weight loss drug on the market right now can help you lose only 9%.” To make sure you never miss out on another great opportunity like this, sign up for The 5 Min. Forecast, right here.