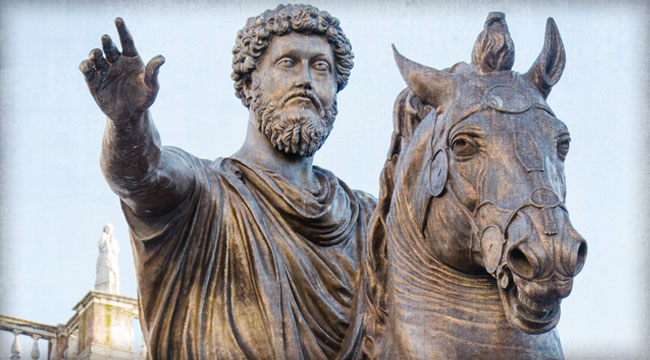 The Ancient Secret to Thriving in Any Environment

“The wise man confines his operations to his own concerns, having his attention fixed on his own particular thread of the universal web.”

We’ve mentioned Marcus Aurelius once before in our digital leaves.

Regarded as one of the greatest texts on philosophy, his Meditations is chock-full of timeless wisdom. We find ourselves returning to it at least a couple times a year.

If you haven’t read it, check out Gregory Hays’ translation. Try not to be profoundly changed by it.

By taking full responsibility for your own life, Aurelius explains, you’ll make the maximum possible contribution to the greater good of the universe.

On top of being awesome…

Meditations is widely considered to be one of the greatest texts on Stoic philosophy.

The modern-day thinker especially can benefit from Stoicism’s perception: It emerged out of a present-day familiarity…

While Athenian city-states were crumbling before Greece’s eyes, it was a way of coping with the constant upheaval.

Over time, Stoicism refined itself into a way to master chaos… and even to thrive in it.

It became a stalwart counter to the idea that chaos meant the end of the world. In fact, chaos was only the beginning… a way for nature to clear out the old and bring in the new.

So profound were its ideas, Stoicism has influenced the likes of Shakespeare, Frederick the Great, Adam Smith, JD Salinger, Tom Wolfe, and… some would even say… modern-day libertarianism.

And the sound still rings, calling to those with ears to hear it.

In contrast to Plato and Aristotle’s aristocratic airs, who mostly regarded the populace as swine to be shepherded… or a dangerous crowd to be tricked and enslaved…

Zeno of Citium, Stoicism’s beloved founder, spoke to the rich and poor as one, teaching that society was less functional when split into classes.

Anyone who wants to become wise, wealthy, and happy, he taught, should have the opportunity to do so. 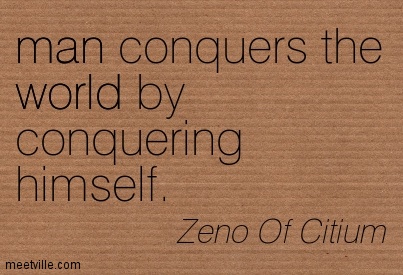 And to find that wisdom, wealth and happiness?

“Stoicism,” says Zeno’s Wiki page, “laid great emphasis on goodness and peace of mind gained from living a life of Virtue in accordance with Nature.”

In his The Economy of Mind, written in 1982, Warren Brookes seizes the spirit of Stoicism in one passage…

“The natural ecosystem is so… remarkably interrelated that even the best-intentioned efforts to regulate this environment… invariably bring about reactions and distortions throughout the system. While these accommodations are frequently painful and difficult, they are usually better in their long-term result, because nature tends to preserve, protect, and strengthen its own creation.”

The Stoics taught that the world itself achieves a balance. And a natural balance always results in something better than a forced “solution” could bring.

It has a similar scent, no?

In light of current events, the Stoics crossed our minds…

A five minute peruse of the headlines won’t betray the truth: We suffer no shortage of impending chaos.

Geopolitical dynamite with short wicks in Iraq… Syria… Ukraine… Libya… (And smaller, but no less erratic flames in others)…

The constant pounding threat of cyber-attacks, cyber-terrorism (that could knock out essential services anywhere), cyber-espionage (someone could be watching you right now), cyber-warfare, and malevolent cyber-crimes.

No matter what corner of the earth you’re rubbing your chin from, we’re all tethered enough to be screwed.

And, let’s not forget: The looming fallout from yet another economic collapse.

Just one flick of the fingernail could send the house of cards toppling to the unkempt lawn below.

And we’re not just talking about the Western countries. No matter what corner of the earth you’re rubbing your chin from, we’re all tethered enough to be screwed.

“China, believe it or not,” our HQ leader Addison Wiggin says, “is in more of a credit bubble than the United States.”

And, he says, a collapse in China is just one of many potential catalysts.

Addison has uncovered three of the most likely possibilities to trigger a global financial landslide worse than 2008. (Side note… To ensure you’re able to gain access to Addison’s full assessment of what’s to come, sign up for Laissez Faire Today, for FREE, right here.)

The world is topsy turvy. The plates are wobbly… and losing more and more balance by the day.

As individuals, you and I can’t do much about these things. They’re well beyond our control.

The first step to sanity is recognizing this simple fact.

All we can do is be aware of these dangers. And, like the Stoics would suggest, have our attention fixed on our own “particular thread of the universal web.”

All we can do is work to achieve that which we can contribute to ourselves, while avoiding being pulled by the world’s ubiquitous drama.

Questions of the day:

What constructive action can you take to enhance your own life?

Is there something weighing you down that you have no control over? Can you accept it as such and simply shift your focus?

Email us your answer, if you wish, here: Chris@lfb.org

Whatever your answers, think about what the unintended results could bring: Often, they will mean enhancing others’ lives along the way.

We’re surrounded by illuminated minds here in our Baltimore HQ. And, each one, in one form or another, has devoted his or her life to enhancing the lives of others.

When cast together, they can help provide us with actionable solutions and sharp knowledge to master nearly all our modern-day challenges.

Over time, you’ll get to know them all. Stay tuned.

Ed. Note: The themes in Chris’ FREE e-letter, Laissez Faire Today, center around three things: Freedom, self-reliance, and action. That means current subscribers to Laissez Faire Today receive daily tips, tricks, and insider secrets on how to live their best possible life — and unabashedly share their uniqueness with the world. And now you can join them, absolutely FREE. Don’t miss a single episode. Sign up today, right here.