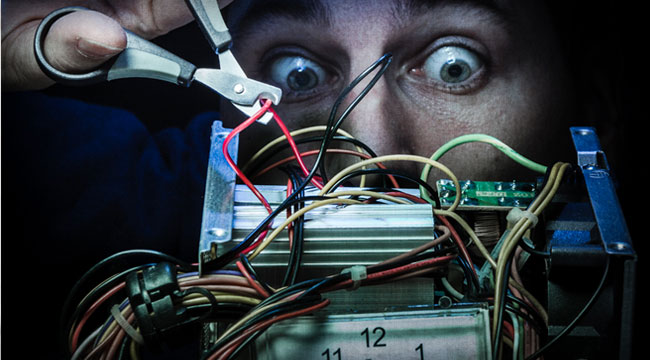 And it might be years before you discover them. Tick, tick…

By the time you do… Kaboom! It’s too late. They’ve already blown up your retirement.

I’m talking about three time bombs the mutual fund industry has planted within your 401(k). And I don’t want them blowing up your retirement.

By the time you’re done with this article, you’ll know how to identify them. And, more importantly, how to disarm them.

I tipped you off to this one last month. But we need to give it more attention here. It’s all about the difference between “active” and “passive” management of mutual funds.

Passive managers have little work to do. They simply track the performance of an index like the S&P 500. But active managers try to “beat the market.” As we showed you last month, only 1% of fund managers do that consistently.

Sure, they majority can pull it off for a year or two, or even five. That’s what they love to show you in snazzy charts decorating their slick brochures. But over the long haul, they sink back to market-tracking performance. Or worse, they lag the market. And it’s the long haul you care about, right?

Here’s an example of how the time bomb detonates. Say you have 35 years to retirement and a modest 401(k) balance of $25,000. Let’s assume a 7% annual return and that you make no more contributions.

In the real world, the difference can be even more stark. A typical actively managed fund rakes off 1% or more of your invested funds. But as we showed you last month, a passively managed fund like the SPDR S&P 500 (SPY) has a rock-bottom fee of only 0.095%.

“Turnover” is a term that describes how much buying and selling a mutual fund manager does. Oftentimes, you’ll see turnover of 100% in a fund. That means every holding that was in the fund a year ago has been sold and replaced with something else.

Whenever you buy and sell a stock, you pay the broker a fee. It’s no different with the manager of a mutual fund buying and selling the stocks in the fund. So we’re talking about fees piled on top of fees. (You get one guess who pays for them. And it’s not the fund manager.)

Now here’s a frightening number: The average mutual fund has a turnover of about 121%. The entire portfolio is recycled every 10 months. Kaboom!

But with passively managed funds, turnover is no issue. Vanguard’s S&P 500 index fund (VFINX) has a turnover of only 3%. Its holdings change only on those rare occasions the composition of the S&P 500 is tweaked.

Here’s one of the sneakiest time bombs of all.

It was discovered by a Wall Street strategist and former NYU professor named Antti Petajisto. He did a landmark study of actively managed mutual funds. He found one-third of them have a portfolio that looks suspiciously like an index such as the S&P 500.

“Whenever you buy and sell a stock, you pay the broker a fee. It’s no different with the manager of a mutual fund buying and selling the stocks in the fund.”

This is a phenomenon known as “closet indexing.” It happens because many fund managers are petrified of underperforming the market. Ever. So over time, the stocks they choose end up looking very much like the ones in the index.

Result: the performance of a passively managed fund… while you pay the exorbitant fees of an active manager!

What to Do Now

If you have a 401(k) from a former employer, you want to roll it over into an IRA. Then buy shares of a low-cost index fund like SPY. That’s the surest way to disarm the 401(k) time bombs.

But what if you have a 401(k) with an existing employer? You don’t have the rollover option. So you’ll have to become a one-person bomb squad… and disarm them.

Find out the ticker symbols of the available funds in your 401(k). They’re on the website of your plan and in the printed materials that came with your plan. Then go to Morningstar.com. Type in the tickers in the little box that reads “quote.”

That will take you to a detailed page where you can learn about all three of these time bombs. You’ll find the expense ratio and the turnover at the top of the page.

Then scroll down and look for the “top holdings” — the stocks that make up the biggest chunk of the fund. If the fees are high but you find big-name S&P 500 companies like Apple, Exxon Mobil and Johnson & Johnson, you have a closet indexer on your hands.

Here’s the good news: Nearly every 401(k) plan has a basic S&P 500 index fund with low fees (0.1% or less) and almost no turnover (4% or less). If you don’t find that, you might see a “total stock market” fund. Those are good too. The ticker for Vanguard’s is VTSMX. Fidelity’s is FSTMX.

Switch your high-cost, high-turnover, closet-indexing funds into real index funds. Do that and you’ll disarm the time bombs. Over a span of decades, that’s tens of thousands of dollars you won’t hand over to Wall Street. They’ll compound in your account instead — where they belong!

Ed Note: A new war is quietly brewing in America. A war on your retirement. Either you take steps now to protect yourself, or watch Wall Street and Big Government suck away everything you’ve worked for. In today’s episode of Laissez Faire Today, Chris Campbell shows that the first shots have already been made. Learn how to protect yourself. Subscribe to Laissez Faire Today for FREE today.

Until the Tax Man Do Us Part

How marriage will affect your taxes and what you can do to help.