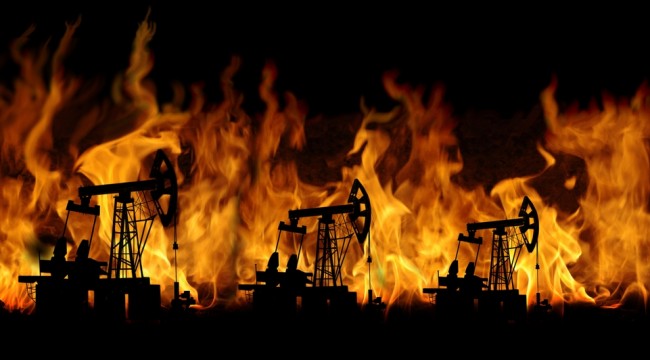 “Everything is proceeding as I have foreseen.” — Emperor Palpatine, The Return of the Jedi

Jon Stewart made great comedic hay during the Bush Administration out of the enormity of Dick Cheney’s “Sith Lord” malevolence. Events in Iraq in the past week have made especially palpable Cheney’s Palpatine-like quality.

As Iraq unravels, you may suspect that Cheney might now be, along with his fellow Iraq War architects, wringing his hands over how President Obama ruined what still could have been a splendid little nation-building project. Yet, as radio host Scott Horton indicated recently, he is more likely looking on at the debacle, along with those who opposed both him and the war all along, as the arrival of the inevitable.

In the first Bush Administration, Cheney was Secretary of Defense, and helped plan the first invasion of Iraq during the Persian Gulf War. In that war, he agreed with the decision not go all the way and overthrow the dictator of Iraq, Saddam Hussein. This was extremely frustrating for the neocons, who were baying for Baghdad blood even then.

In a 1994 interview, Cheney was taken to task over this “missed opportunity” by the neocon American Enterprise Institute. Cheney defended the decision using the following predictions:

“Once you got to Iraq and took it over, took down Saddam Hussein’s government, then what are you going to put in its place? That’s a very volatile part of the world, and if you take down the central government of Iraq, you could very easily end up seeing pieces of Iraq fly off: part of it, the Syrians would like to have to the west, part of it  — eastern Iraq  —  the Iranians would like to claim, they fought over it for eight years. In the north you’ve got the Kurds, and if the Kurds spin loose and join with the Kurds in Turkey, then you threaten the territorial integrity of Turkey.”

Let’s look at the events of this past week, and see how clear Cheney’s crystal ball was.

Cheney predicted Syrians taking over western Iraq. Western Iraq, including oil-rich Mosul (the second-largest city in the country), has indeed been taken over by a force entering from Syria: namely, ISIS (the Islamic State of Iraq and Syria), an Al Qaeda splinter group (and beneficiary of American military aid to the rebel forces in the Syrian civil war).

True, it’s not the Syrian state, and only partially consists of Syrian people. But he got the geography right, and the demographics partially right.

Cheney predicted the Iranians taking eastern Iraq. The U.S. war that overthrew Saddam’s Sunni Muslim regime put the government and the capital in the east, Baghdad, into the hands of a Shi’ite regime allied with Shi’ite Iran, who backed the election of the current prime minister.

And now Iran has actually deployed troops to combat ISIS into Iraq from the east. With the U.S. ground presence already mostly gone, and now rapidly evacuating, and Iraqi government soldiers stripping off their uniforms and abandoning their U.S.-supplied weapons to ISIS at the first sight of them, the Iranian troops are becoming the only serious ground force in the east.

Finally, Cheney predicted the Kurds spinning loose and being a threat in the north. The Kurds have indeed become autonomous, and recently seized the northern city of Kirkuk for themselves, after it was abandoned by Iraqi government forces fleeing the oncoming ISIS forces.

If Cheney knew a decade before the war, that overthrowing Saddam would never make Iraq an intact, independent “beacon of democracy” in the Middle East, why did he push for it so hard in 2003 anyway? It is interesting that, at the time of the interview, he wasn’t yet CEO of the oil field company and military contractor Halliburton; that tenure would start the following year, in 1995. But Juan Cole argued in 2004 that that’s not quite it.

What was in it for Cheney? I don’t think it was a matter of money. At least I hope it wasn’t. Cheney sold half his Halliburton stock options in 2000 for $5 million, and it is hard to imagine a man taking his country to war to increase the other half in value by a few million.

I suspect it is political. Not all corporations make money on war. Some actually lose money. But Halliburton, Bechtel and a few other components of the military industrial complex do benefit from war.

Strengthening that sector of the American economy strengthens the political Right. Turning the republic into a praetorian state would permanently yield profits for the military industrial complex in such a way as to create a permanent Republican dominance of all the branches of the U.S. government.

In any case, what is clear is that the old “stupid or evil” question regarding our overlords in Washington is easy to answer in the case of Richard Bruce Cheney. What is particularly evil, is that he also had a keen sense of the high cost in American lives (not to mention Iraqi lives) that overthrowing Saddam would entail and the quagmire that would result from occupying Iraq.

It’s a quagmire if you go that far and try to take over Iraq. The other thing was casualties. Everyone was impressed with the fact we were able to do our job with as few casualties as we had. But for the 146 Americans killed in action, and for their families  — it wasn’t a cheap war.

And the question for the president, in terms of whether or not we went on to Baghdad, took additional casualties in an effort to get Saddam Hussein, was how many additional dead Americans is Saddam worth? Our judgment was, not very many, and I think we got it right.

And now, thanks to his change of “judgment,” 4,800 Americans and up to 500,000 Iraqis are dead, American resources valued at $2 trillion are squandered, Al Qaeda (which had absolutely no presence in Iraq prior to the invasion) effectively has an oil-rich state of its own bestriding Iraq and Syria, the successors of Al Qaeda in Iraq are romping all over the Middle East from Syria to Libya (often with U.S. support), Iraq is being rent asunder in a tug of literal war between neck-severing Sunni jihadists and Shi’ite death squads and torturers.

And now the Washington elite are moving toward resuming air strikes, which will probably kill more innocent men, women, and children than the jihadists and the death squads combined.

Like Cassandra in legendary Troy, Dick Cheney knew exactly what futility, disaster, and carnage would come from a war. And yet, like Agamemnon, he launched it anyway.

Dan Sanchez
for The Daily Reckoning

Ed. Note: Each day, readers of the FREE Laissez Faire Today email edition are given unique chances to discover actionable profit opportunities – on everything from biotech breakthroughs to how to beat back the government goons and retake your freedom. To ensure you’re getting the most out of everything you read, click here and subscribe to the FREE Laissez Faire Today email edition, right now.

Daniel J. Sanchez directs the Mises Academy at the Mises Institute. He writes at Mises.org and DanSanchez.me.